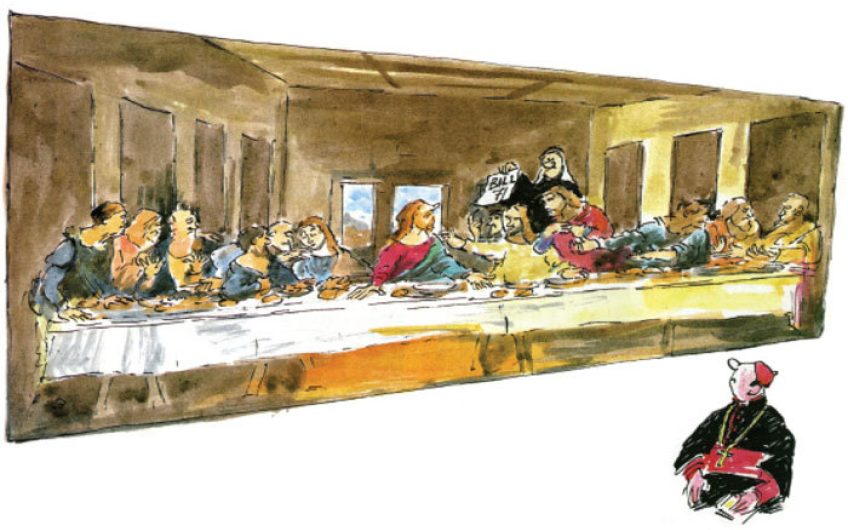 Recently I decided to make a short Catholic retreat, and it was arranged that I should spend a day or two with the sisters of Jeanne Delanoue, Mother of the Poor, at their maison mère in St Hilaire-St Florent, just outside Saumur. After about four days there I felt so much better than I had in twenty years of retreat-going that I felt like leaving the good sisters some money. I didn’t, of course, because I didn’t have any, and anyway they didn’t expect it, but the thought was there, at least.

In 1978 I spent an entire month with the Community of the Resurrection in Mirfield, Yorkshire, trying to decide whether or not to become a Roman Catholic (Mirfield, in fact, is very High Anglican). They had a guest-master who, far from making his guests feel welcome, always seemed glad to see the back of them. I shall never forget the look of smug satisfaction on his face as the taxi swept a departing guest away. This increased as he examined the large cheque the guest had left behind. I resolved to pay as little as possible for my stay and, in fact, gave him only £20 for the whole month. For many years after that Father Luke wrote to me regularly saying that I should ‘not lose sight of’ the money I still owed them.

I have always understood the principle of monastic hospitality to be that you treat your guest as though he were Jesus Christ come to stay for a while, and you certainly wouldn’t dream of shoving a bill on Our Blessed Lord’s breakfast plate within a few days of his arrival. But that is what increasingly happens in convents and monasteries these days.

They did try to maintain the monastic principle at Douai Abbey (Benedictines) where I often used to go on retreat after becoming RC. They never seemed to ask for, or expect, any money, so I would occasionally drop a fiver into the collection plate at Mass on Sunday, if I could afford it – or even if I couldn’t. But even Douai, the most tolerant of places, got fed-up with my free-loading. The Prior, who disliked me, caught me making a long-distance phone call to France and I became persona non grata after that. I understood why, of course, but I still maintain that in the strictest sense they were wrong to exclude me from their peaceful, religious life.

I used to go to Worth Abbey (also Benedictines) after that, where the Abbot put a full bottle of Scotch on the table of an evening and proclaimed that neither of us would make a move towards bed until it was empty. Neither of us did. Then I went to the snobbish Downside where the double-barrelled Bursar tried to institute criminal proceedings against me for bouncing a cheque on their bookshop. Downside is one of the richest monasteries in the world, presiding over 500 acres of rich farmland and an extremely expensive public school, they eat eight courses at dinner on Feast Days, yet they seem unable to accommodate a poor NFA (No Fixed Abode) like me even for a few days.

For some years I became the scourge of retreat houses all over England, leaving a trail of distraught guest-masters behind me. The Prior at Boar’s Hill, Oxford (discalced Carmelites), still has a nervous breakdown when my name is mentioned, since I found a way of sneaking in to stay at the Priory for days at a time without informing anyone of my presence. I think they got angry because my presence in their midst underlined the essential hypocrisy of their position in respect of hospitality, epitomised for me (at Douai, I’m afraid) when we sang the psalm, ‘And let me never forget my poorer brother’ at midday office, and then watched the Prior see off a group of tramps who had gathered at the refectory door in search of nourishment. I suppose my own behaviour was a kind of tacit revenge, a way of saying that you can’t have it both ways.

The only retreat house in the UK where I am still persona grata is, oddly, not a Catholic one at all, but a Charismatic one, Fursey House in the New Forest, where they let me stay for several weeks without payment as recently as 1996. Money was never mentioned so, of course, I felt like paying. (But did you? No.)

Things are not much better here in France where I have been ‘retreating’ since 1991. The first I ever went on was with some very weird nuns at a place called Beaufort, in a remote part of Brittany. Their liturgy included dancing around the altar at vespers and strange incantations at compline. It was all a shade eerie. I left them 200 francs, all I had on me, but the Prioress, who was a cripple, stamped her club-foot with rage and threatened me with the police. I don’t think I shall be going back.

In 1992, I went to Solesmes, the great Benedictine Abbey in the Somme (160 monks), where the Abbot washes the hands and feet of each guest on his first evening. He welcomed me as ‘an old Oxfordian’ and said I might stay as long as I wished. I would have done so except that the vin de table they served at dinner tasted like red ink and gave me an upset stomach. I went back in 1994 but they had got wise to me by then and, after a few days, demanded un petit cadeau, i.e. money (precisely the term used by prostitutes in France). Also, the assistant guest-master, an American, was a raving queer who wouldn’t stop dropping in to see me to discuss the state of my soul. So I got fed up and left. But I miss all those monks doing their Gregorian Chant.

In Lourdes I stayed with the nuns at St Joseph’s Convent. While I was there, someone broke in and desecrated their chapel and stole two thousand francs. I was the suspect, so the nuns called in a Clouseau-like inspector who threatened to throw me into a bare cell, strip me naked and ‘beat the living shit’ out of me. In the end, he had to let me go for lack of evidence.

In October 1995 I stayed for a week at the famous Taizé Community in Burgundy. I slept in a broken bed in a room with no light bulb or washing facilities, sharing with an elderly German. We ate disgusting food in a broken-down tent, like refugees in a war zone. For this they wanted £100 a week! When I complained to Frère Roger, aged 82, a friend of the Pope and of the late Mother Teresa, he seemed quite startled. ‘No one has ever complained before,’ he said. ‘You do not understand our difficulties here.’

I understood them only too well. Their difficulty is getting gullible guests to pay through the nose to live in conditions you wouldn’t keep a dog in. And all in the name of Christianity. Taizé was a kind of Christian concentration camp, where you were refused even a cup of cold water.

I’ve only once, in twenty years, felt guilty about not paying for a retreat, and that was when I stayed with some Spanish sisters in Lourdes in December 1992. They really did seem poor, and I think they genuinely needed money. They belonged to an order called Sisters of the Love of God and, as I pointed out to their superior, that very title implied – to me, at any rate – that they must occasionally accommodate someone like myself for nothing. She seemed to see my point and, when she did so, I at once felt like paying her. And one day I shall.