Confessions of a QI elf - Will Bowen 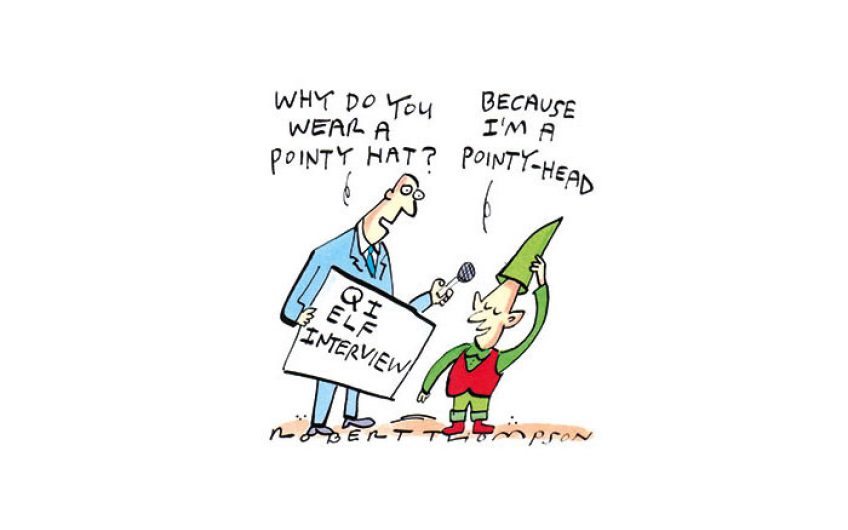 How do TV quiz researchers come up with fiendish questions? Genius elf Will Bowen reveals the rich seams he mines for nuggets

Years ago, mulling over a large malt whisky with John Lloyd, the founder of QI, I listened as he explained to me what was wrong with our education system.

It was too linear. Subjects like maths and history started at the beginning and proceeded on outwards like the spokes of a wheel.

What wasn’t taught (but was so much more interesting) were the back-route, cross-connections between subjects. He had hoped a study of these might make his children want to learn. Once he opened the door, he realised there was this vast hinterland of offbeat human knowledge waiting to be tapped.

It was too big a job for one person. So he collected a team of so-called elves to mine these rich seams, before presenting the material in the form of a quiz show called QI.

Initially I was reluctant to join. From my work as a stage designer it seemed quite a leap to become a QI elf – but no more than the leap from my training as a pure mathematician into the theatre.

QI facts are found in the footnotes to footnotes. Facts don’t need to be funny; if they’re odd, comedians will make them funny. That is really the core of the show.

Where to go to find such material? All elves are different – so we aren’t all falling over one another to get the same material. Some are already researchers in different fields and QI is a spillover. Books, newspapers and magazines can all be good hunting grounds.

Some websites yield nuggets, but the internet is not good at serendipity. If you ask for ‘odd facts about navigation’, yes, you will quickly be aware of Polynesians and Vikings, but it will take some time to find that Polynesians used their testicles as a navigational aid and Iceland was found with the judicial use of caged ravens.

The internet has its uses in fact-checking, but one has to beware of what the elves refer to as a ‘Newton’s catflap’. This is an internet meme that goes viral but has no solid foundation in fact (the origin being a spurious tale that Isaac Newton invented the catflap).

For me, books are key. On the whole, the material is trustworthy and they provide referenced footnotes to follow up. They can make for slow progress, though. I find that authors’ lectures often provide a pithy, succinct insight into a subject. I attend the Royal Geographical Society, the Royal Academy, the Royal Institution, the British Museum, Gresham and Imperial Colleges and a few other learned societies. You can listen to Nobel Prize-winners, intrepid explorers, academics of all disciplines, TV presenters and weird oddballs.

Such lectures are a kind of educational theatre where you can hear why there is a bust of Lenin at the most remote spot in Antarctica, or that, in the First World War, Nobel laureate Lawrence Bragg invented an accurate technique for gun-ranging while sitting on a makeshift lavatory near the front line.

I also seek out ‘backstage tours’ of odd institutions, led by real experts who can deliver fascinating titbits. At Bletchley Park, I learnt that in a meeting to discuss the best medium for computer memory, Alan Turing quite correctly proposed gin – yes, gin, the stuff we usually drink to forget! At Dr Johnson’s house, I discovered why the great man was hoist with his own petard when it came to accepting a pension.

Research doesn’t begin with a particular question in mind. It’s better to take a scattergun approach. At all times, I carry a small notebook. Books, lectures and tours fill these with facts, as well as the occasional item from conversations or newspapers. Collected over a year, they form the basis of a research programme – facts to be checked, probed and further explored. (All facts must be sound – we get letters!) After wheat has been sorted from chaff, ideas are written up as a short paragraph – raw data for consideration.

John’s image of the elves as data-miners is correct. It is a team effort and not a linear process. We heap up our spoils in themed piles, and the biggest piles are forensically examined to see whether a question might emerge. The point of the question is to stimulate (amusing) conversation and the bigger the pile of data, the more material the questioner has to keep that conversation going.

I helped to develop the on-screen demonstrations. My father and grandfather were both chemists and I remembered the joy of their demonstrations – like the catalytic decomposition of hydrogen peroxide, where oxygen-filled foam shoots up from the top of a flask. Stephen Fry was rather underwhelmed by the rehearsal we did, so for the actual show I upped the amount of catalyst – and the ejaculation nearly hit the roof, leaving Fry lost for words.

After 15 years as an elf, I’m glad I gave in and joined the team. It has given me an excuse to re-educate myself – to refill my store of knowledge at a time of life when it is often beginning to drift away.

John Lloyd’s insight was inspired – and there is material aplenty for many series to come.