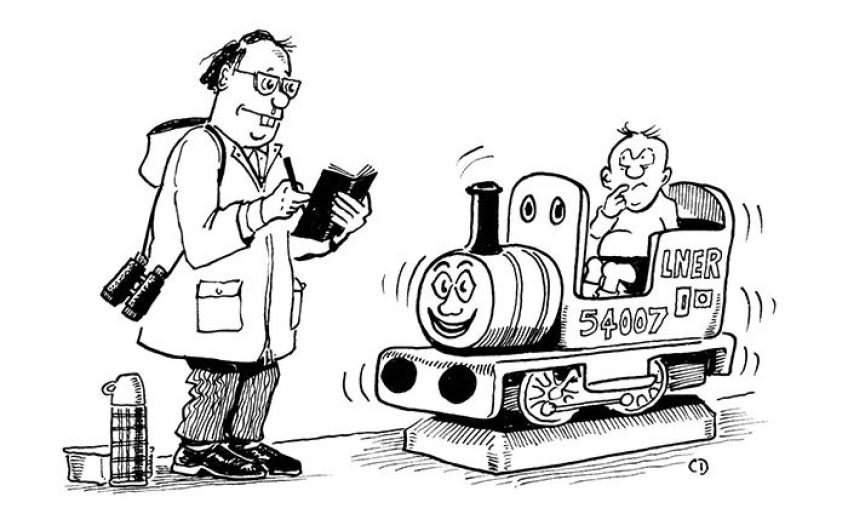 The other day I spotted my first train in over twenty years. I’ve seen a lot of trains during that time, but not spotted them as such. There is, of course, a huge difference.

The train in question was a little red steam engine which bore the famous initials ‘LNER’ on its cab side. I made a note of its number, which was 54007. Anoraks among you will already be waving indignant fingers in the air. Quite apart from the fact that the London & North Eastern Railway’s locomotive livery was green (or black, or occasionally blue or grey), never red, LNER locomotives should, of course, have four-digit numbers, not five. Even after nationalisation in 1948, the five-digit series ‘5XXXX’ was allocated to engines of the former London, Midland & Scottish railway, not the LNER.

‘For goodness sake! Can you believe that?’ I said to my wife.

‘What?’ she asked. Her interest in trains is fairly limited, so I explained these laughable inconsistencies in layman’s terms. She didn’t seem greatly concerned. ‘If it bothers you, why not complain to the girl on the checkout?’

We were in a supermarket at the time, and the train I had spotted was one of those coin-operated children’s rides that clutter the exits. I tutted and shook my head. If a supermarket can manage to get the fifteen-digit bar code right on every one of the tens of thousands of items they have on sale, surely they can manage to come up with one historically accurate train number. But years of experience have taught me that pointing this out to a dim sixteen-year-old on a supermarket checkout would be a frustrating exercise at best, so I decided to let it go.

I stopped being a trainspotter – technically speaking – way back in 1978. I didn’t like the technological changes that were taking place. Not in railway technology, but in trainspotting technology. Long before the arrival of mobile phones the Dictaphone was making platform ends noisy and unsociable places to be. Instead of intensely scribbling numbers down in a notebook, people were shouting them into the palms of their hands. And early camcorders were being used to film passing trains which could then be spotted later on a TV screen.

The natural time to give up train-spotting would be once you have spotted every train. In the late Fifties that was nigh on impossible, with a tangled railway network and over fifteen thousand engines to look for. But fifteen years later, thanks to the efforts of Dr Beeching and a newly installed computer system, life was a lot easier for the anorak. There were fewer than three thousand engines at large on a much slimmer system, and anyone with access to a BR computer terminal could pinpoint the precise location of any one of them at the push of a button. (Well, five or six buttons, perhaps.)

Thus, by the age of eighteen, my much-travelled friend and mentor Justin had collected the number of almost every engine in Britain.

But would he stop there? Not likely. The next step is to start collecting the numbers of carriages, then coal trucks.

It was at that point – when I realised that I would never find closure, and that trainspotting would be a perpetual occupation – that I decided to walk away, to rinse out my flask and hang up my binoculars for good.

Twenty-four years later I still don’t feel entirely cured, and I’m sure my wife would agree. What, she will ask, is the difference between the Class 25 model railway engine she got me for Christmas, and the Class 25/3 model railway engine I now want for my birthday? And why, she will continue, must I insist on numbering all our holiday photographs on the reverse with a seven-digit number before anyone is allowed to look at them? (There is an entirely logical reason for that which I could explain here, but perhaps it would be best if I didn’t.)

I believe that trainspotting was just one symptom of an underlying problem which, I fear, is with me to stay. Anoraxia, you might call it. Or a degree of Asperger’s perhaps. At the end of the day, you can take an anorak out of his anorak, but you’ll never take the anorak out of an anorak. If you see what I mean.