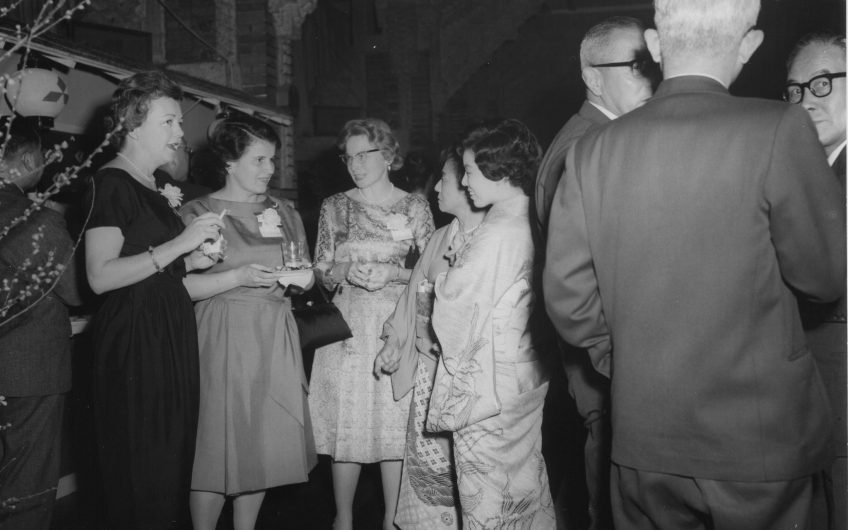 Mrs Miniver got it right, in her 1930s essay called ‘…Of A Party.’ 'How perfect it is,’ she wrote, 'that first moment when one of you says, "It’s about time we gave another party”.'

‘Suddenly the room is full of people talking, laughing,’ she went on, 'the women all beautiful and the men witty. So rosy is the picture that you lose no time in setting the reality in train.'

Posting off the invitations, she decided, is 'one of the cheapest ways I know of attaining the sensation of true lordliness.'

This was indeed a mutually euphoric moment. The hosts promise a lavish welcome; the guests are flattered to be the chosen. Giving a party is, mused Mrs Miniver (alias Jan Struther, pen-name of Joyce Maxtone-Graham), ‘like having a baby. Its conception is more fun than its completion, and once you have begun, it is almost impossible to stop.'

Virginia Woolf’s Mrs Dalloway agreed. She thought party-giving 'the greatest of marvels; the supreme achievement of the human race.' She too imagined her handsome house 'humming with people coming close to each other, exchanging views, stimulating each other.…'

The reality, as we realise at the start of 2021, may never be like that again.

How many of us found ourselves planning, during lockdown, to stage the mother of all parties after this is over? And how many had resolved never again to schlep to yet another of those gatherings that so often are, sub specie aeternitatis, a pointless waste of time?

My friend Thane Prince once told me that the best party she ever gave was the one she had to cancel.

Sending out the 100 invitations had been great fun, as Mrs Miniver said. It was fun too to receive the RSVPs from happy invitees. And a satisfying exercise to clean the house so that it looked like an estate agent’s photo, all space. And, as a professional cook, to start on the canapes.

Then her banker husband was summoned to South America on a business trip. The relief of not having to give the party after all, while having cemented 100 friendships by her invitation, she said, was blissful.

So, possibly, was the invitees’ relief. No reflection on Thane’s haute-cuisine hospitality. But when a party looms, guests often experience a deep reluctance to set forth after all. The shy inner child surfaces, rather preferring to carry on with quiet, bookish pursuits. ‘But you’ll enjoy it when you get there,’ one’s mother used to say. (Not true. I still recall being deposited on a doorstep in tears, and then hiding behind a curtain when the games began, and not emerging until my father arrived to collect me.)

Of course I grew up into a party-loving flibbertigibbet, often accused of being willing to attend the opening of an envelope. But it is now at least a year since I went to a party, or gave one, and I suspect Covid has been the last nail in the coffin of the Gatsby-style omnium gatherum.

Which is in many ways a relief. My dearest friend, the late Angus McGill, had a rule: ‘The optimum number for any social gathering is two. The next best is four. The next best is six. After that, it’s downhill all the way.’ He still had endless fun, in small numbers.

Virginia Woolf believed parties brought into sharp focus the blur of everyday life, making everyone vulnerable. She decribes poor Lily Everet, a studious, awkward girl uncertain of being in the right dress, seeing Mrs Dalloway ‘bearing down on her with a smile that meant “But you’ve got to come out of your corner and talk” -- a smile at once benevolent and drastic.’ (We all recognise ‘benevolent and drastic’.)

Another female guest, at the end, tells Mr Dalloway, ‘I have enjoyed myself.’ ‘And then, descending the stairs, she mutters to herself: ‘Lies, lies, lies!’

Which is why I believe those simple garden suppers of 2020 for five widely-spaced people, or maximum six, were agreed to be so enjoyable: unstressful, civilised, full of laughter (with everyone sharing the same story) and ending early. Thanks, Covid!

No more stand-up-and-shouts. No more witty instructions about what to wear (‘Dress: Mid-life crisis.’ ‘Dress: Divinely.’) No more placements below the salt, or next to a bore. No speeches, or performances by hosts’ clever children. No dancing – well, I love dancing, but when the band strikes up, most men retreat, my husband a rare exception.)

No arguing with spouse about when to leave. No arriving home to slump on the sofa, and pour an indecently large glass – because we are all already slumped on sofa with a large glass and the latest episode of The Undoing or The Crown. No more FOMO: this ugly sentiment is replaced by COSH: the contentment of staying home.

Art of dropping out - Terence Derbyshire