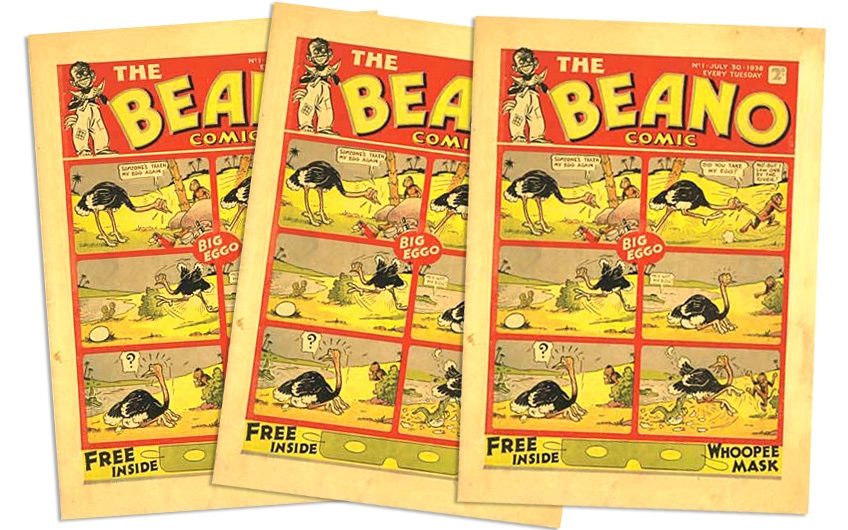 There are only 12 known existing copies of the first edition of the Beano, published in July 1938. One of those tuppeny comics fetched £12,100 at auction in 2004.

The enduring rascal Dennis the Menace first appeared 70 years ago, in 1951, and is still going strong. Other favourites over the years have included Minnie the Minx, Roger the Dodger, Biffo, the Bash Street Kids and Lord Snooty.

In 2009, The Oldie’s Review of Books featured ‘The History of the Beano’ by Christopher Riches and Morris Heggie:

‘Before the start of the Second World War, a comic book arrived in Britain that would provide comfort, humour and a welcome distraction from the savage battle for children all over the country,’ said the Yorkshire Post. ‘Thankfully, the Beano has continued long after the fighting stopped.’

‘Amazingly,’ said the Coventry Evening Telegraph, ‘the comic has remained funny, and reading this affectionate book, it’s refreshing to see how the anarchic, zany principles that made it such a hit all those years ago have remained to this day.’

But it’s changed along the way, Marc Horne found when interviewing ex-Beano editor Euan Kerr for Scotland on Sunday. The relationship between Dennis the Menace and the bespectacled Walter (the ‘prince of Softies’) became particularly troublesome. ‘There were accusations from certain quarters that it was a little like gay-bashing,’ admitted Kerr. So they made sure it was clear that ‘Walter was completely happy about who he was and a confident, likeable character in his own right. We eventually give Walter a girlfriend too.’

Ironically, the joy of the Beano was never much about the characters, said Danny Baker in the Times. It was all about the ‘brilliant world of mad possibilities. The weekly triumph of the effortlessly fantastic. The escape from accepted life.’

‘Show me the comic and I’ll give you the man,’ he concluded.