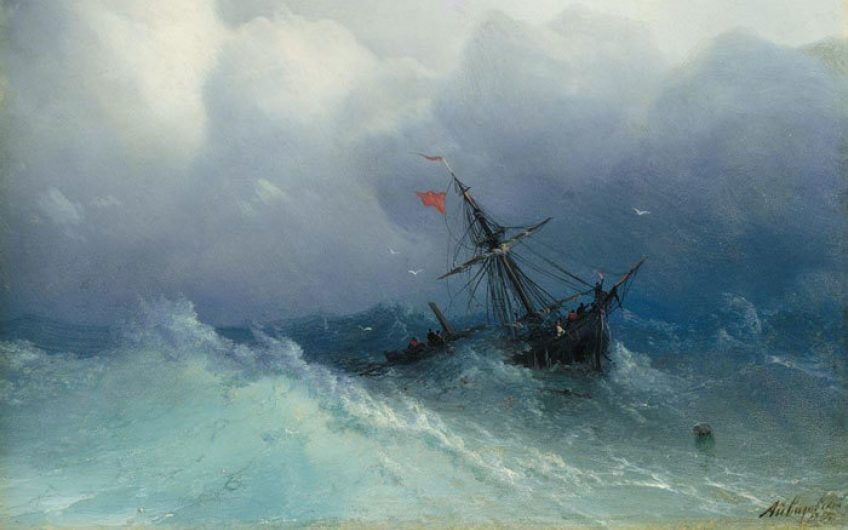 As the remains of a First World War German shipwreck are discovered on a Cornish beach, Andrew Watts reflects on the dangers of the sea

When I lived in London, I never parked my car without studying the signs in each bay. When I moved to Cornwall, I realised that they were pretty irrelevant – the few traffic wardens employed by Cornwall Council have a healthy live-and-let-live approach - but I did need to study the tide tables.

Only a fool, or a tourist, parks on Newlyn Bridge during a spring tide, when the higher waters are funnelled up the Coombe River and smash over the granite parapet. Spring tides are caused by a full or new moon, and the state of the moon is no astronomical curiosity down here. Fishermen cannot set static gear in a spring tide; so a full moon means no hake in the fish and chip shop.

The fact that the moon’s orbit is exceptionally close to the earth just now makes most of the country talk about a 'super moon' – and where best to see the 'Super Blood Wolf Moon' on Sunday – but in Cornwall we notice that the moon has a stronger gravitational pull, making high tides higher and low tides lower.

The lower tides have meant that shipwrecks from 125 years ago have been uncovered for the first time in years. The Cintra, the Bessie and the Vulture were all wrecked on 18 November 1893, and their remains briefly appeared on the shore of Carbis Bay, near St Ives, last year.

The three ships were lost in a half-hour period, during a storm – the north coast of Cornwall is exposed to the Atlantic, with few safe havens – but even when the weather is relatively calm, the Cornish coast is a dangerous place. Around its 250 miles, there have been an estimated 6,000 wrecks – making it the most deadly stretch of coastline in the British Isles. The Lizard peninsula, on the south coast, was known as 'The Graveyard of Ships'. The Seven Stones reef off Land’s End alone has wrecked 200 ships, including the Torrey Canyon.

Are the treacherous seas around Cornwall responsible for the Cornish character? The marine biologist Mark Biffra examined the hermit crabs in rock pools along the Devon and Cornwall coast, timing how long it took them to emerge after they had retreated into their shells. Cornish crabs were noticeably quicker to venture out. He ascribed the bravery – bordering on recklessness – of the Cornish crabs to the effect of the stronger waves.

And as with crabs, so with Cornishmen. They are close to the rough seas – literally (the shape of the Duchy means most of it is within a few miles of the coast; the exception being the moors which are sparsely inhabited anyway) and figuratively. It is not just that if you live by a treacherous sea, you had better get used to it; the Cornish seas’ very treacherousness becomes a benefit. The strong waves that once wrecked ships are the reason that surfers make pilgrimages to Newquay and Sennen; fishermen who are prepared to brave the seas during a storm – and some of them are – can bring in £45,000-worth of fish in a single catch; and the Cornish benefit from the wrecks themselves.

In earlier days, this was self-evident: when the Good Samaritan was wrecked on Bedruthan in 1846, at the height of a famine, people sang:

To feed the hungry and clothe the poor.

Barrels of beef and bales of linen

No poor man shall want a shillin’.

There is little evidence of deliberate 'wrecking', luring sailors on to the rocks of the Cornish coast, despite what Daphne du Maurier wrote in Jamaica Inn – although it is said that Cornishmen were barred from employment at the St Agnes Lighthouse in Scilly, after the lighthouse-keeper was accused of turning off his lights and personally looting a ship that was wrecked as a result – but gathering from the 'harvest-field' of the sea was perfectly accepted. There is a charming row of houses in Penzance, called the Rotterdam Buildings, built out of Dutch bricks salvaged from a ship that foundered in Mount’s Bay.

Even today, the wrecks are valuable: one of the many reasons that fish is so plentiful around Cornwall is that wrecks provide a unique environment for fish, for shellfish first of all and then all the way up the food chain – set the nets by a wreck, and there will be hake in the fish and chip shop tonight.

It may seem ironic to base your livelihood on others losing their lives – but not to a Cornishman.