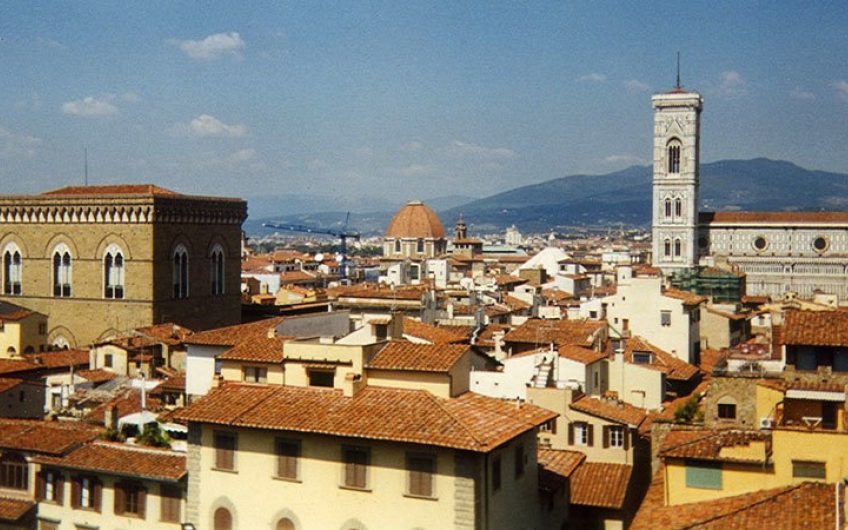 In 1974, aged seventeen, I set off with three friends on a roadtrip around Europe.

In Paris, someone gave us what she said was opium. We thought it was probably safe to take, as it sounded so much more artistic than heroin or cocaine. We convinced ourselves that it was a life-changing experience, though it was closer to taking a mild sedative. Heaven knows whether or not what we took was in fact opium. It had the sweet taste and gooey texture of fudge, so that was probably what it was.

From Paris we drove all the way to Italy. ‘Will you be going to Firenze?’ someone asked me at a house we stayed in on the way. ‘No’, I said, ‘But we’re definitely planning to go to Florence.’

We had a short list of people to stay with, bohemian friends of the most bohemian member of our party. We arrived late at night at a house, possibly somewhere in Tuscany (I never asked) by which time everyone else had gone to bed. I was the first to wake, and went downstairs. As I was furtively rustling up a cup of coffee, a beautiful woman came downstairs in a dressing-gown.

I recognised her instantly from the dust jackets of her novels. I have never forgotten the first words she ever spoke to me: ‘Tell me – is it awful? I’ve just dreamed that I was making love to one of my sons.’

I attempted to stutter some sort of reassurance that it was all perfectly normal, but all the while I felt my reddening cheeks were offering an opposing point of view.

It was the summer of streaking – the irritating novelty song ‘The Streak’ kept coming on the car radio – and as we arrived in the dusk at a small Italian town, one of my gang accepted our bet to streak the length of the main street while we drove behind him with our headlights on. On the way back to England, having parked beside a beach in Normandy, we came back to find our car was stripped of its tyres. The friend whose parents’ car it was screamed generalised abuse against our host nation into the air. We were obliged to hitch-hike to the nearest garage. An old Rover stopped and picked us up. I sat in the front, my friends in the back. The driver, a French hippy in a bowler hat, spoke good English. He told me he had lived in England for two years.

‘A mental institution,’ he told me. ‘People were invading my head.’

My friends in the back remained curiously silent, so I had to make all the headway. It was only after we got out of the car, and the hippy in the bowler hat had disappeared from sight, that they revealed that a long sharp knife, covered in blood, had been alongside them on the back seat.

When we arrived back, the world returned to normal: no opium, no dreamy novelists, no streaking, no mentalists. What had I learned about Europe? Not so much that they do things differently there, as that we – the British – do things differently there. We let our hair down, we go native, we take a holiday from ourselves. Europe is where we go when we grow tired of behaving like Brits. It is why we like it, and why we distrust it, too.