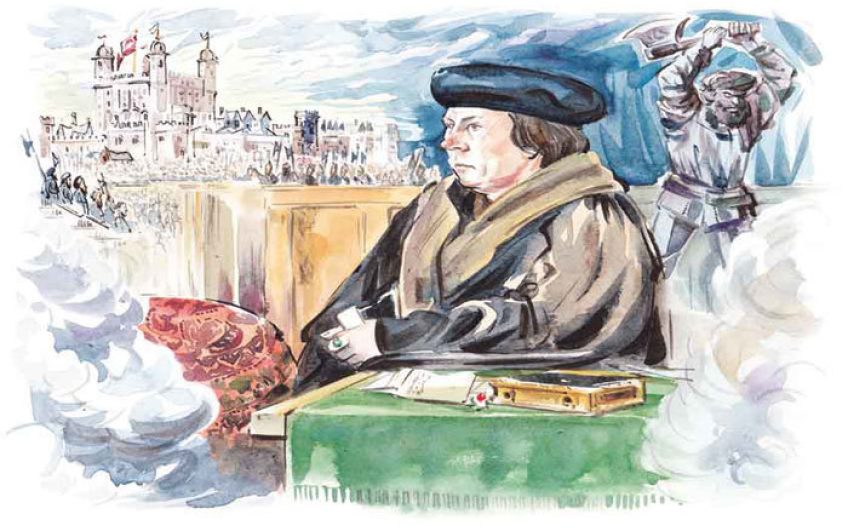 Canterbury Cathedral. The dead of night. A few flickering lights. People huddled around an opened vault. In the dark immensity of the building, dogs are loose. The tomb of Thomas à Becket, murdered on this spot 400 years previously, is being opened on the orders of Thomas Cromwell.

The dogs are to oblige the assembled monks to stay put and witness the desecration. And, because this is fiction, they are also there to frighten the reader, to remind us of Cromwell’s rough manners and his ruthlessness, and to introduce a note of brutish comedy to this Gothic scene.

A workman levers open the coffin. Someone says, ‘Up there!’ and, for a moment, everybody present sees a winged, black creature – a gigantic bird, bat or demon – swoop and flicker. It is the shadow of a labourer’s coat, left hanging from scaffolding.

We are in Hilary Mantel’s imagined Tudor world, where inanimate things – clothes, especially – shudder with significance. Readers will remember the scene, early in Wolf Hall, when the King’s agents arrive at the disgraced Cardinal Wolsey’s house to confiscate his goods. Wolsey’s robes, stiff with golden embroidery, stand upright unsupported. They look like headless bodies, ready to be carted off.

This final novel in Mantel’s superb trilogy begins and ends with a beheading. The first is Anne Boleyn’s. The last is Cromwell’s own. On the scaffold, he is momentarily moved to help the executioner – to ‘take the axe from the man’s fumbling grip: say patiently, “This is how” ’ – because Cromwell, who has risen from abused urchin to the man who runs England, knows how everything should be done.

This novel-sequence offers many pleasures, and one of the greatest of them is the contemplation of two prodigious intelligences at work. There is the cleverness of Cromwell. His watchfulness and caution, his coded conversation and adroit diplomacy, make him, for all his small piggy eyes and brusque manners, a compelling hero.

And there is the cleverness of Mantel, whose prose moves easily from florid splendour to vernacular punch; whose interweaving of past and present is as intricate as any knot garden; who can conjure up a character in all his slipperiness or her intransigence in half

a dozen lines of dialogue; who has a dizzying way of using lacunae to open loopholes into the uncanny; and whose narrative, now complete, has a majestic sturdiness.

Mantel shows again (as she did in her earlier novel Beyond Black) how economically she can create menace. She introduces animals whose wildness and distress form a counterpoint to civilised cruelty – a striped cat from Damascus; a brood of beavers. They act as tapestried beasts do, making the physical world strange. There are dreams and pictures, conduits through which the emotion that Cromwell represses bubbles up. Mostly, though, Mantel works through solid things. She and her protagonist are shrewdly observant of the material world.

Cromwell, a smith’s son, appreciates blades and jewels. An ex-cook, he savours food. A former cloth merchant, he can price damask. Seen through his eyes, palaces are full of gorgeous colour, and also of the evidence of meticulous work. He values skill (such as Hans Holbein’s or Thomas Wyatt’s) as wholeheartedly as he despises inherited privilege. These novels give us the luxury and glamour of court life and ancient ritual, but they are profoundly anti-ecclesiastical and anti-aristocratic. Cromwell is a Protestant and a commoner. His happiest conversations are with his servants.

As the action moves forward, the narrative repeatedly loops back. Readers anxious that they might have forgotten the first two novels need not worry. Themes are reprised, motifs re-introduced and clues glimpsed long ago flashed back to. As Cromwell’s end approaches, we are taken ever further back into his origins, to his near-death in Italy and his near-marriage in Antwerp, and to the time when he was a kitchen boy in Lambeth Palace, and Thomas More was a scholar.

In Wolf Hall, Mantel never named Cromwell. Why not? Perhaps because it exhilarated her to do something difficult, her virtuosity as an author matching his as an administrator and manipulator of minds. Bring Up the Bodies was less exuberant, a tightly structured revenger’s tragedy. The Mirror and the Light is a long-drawn-out lamentation.

Cromwell ‘comes down’ (to use Mantel’s insistent phrase) not just because of his rivals’ machinations, and because fortune’s wheel always eventually dumps its favourites in the mud, but because time weakens and diminishes him.

It is painful to watch a character, whom we have known inscrutable and invulnerable, speak unguardedly to people he still trusts, but whom we readers have begun to suspect. Cromwell gets tired. He doesn’t immediately realise, when the King turns his back on him, as though suddenly fascinated by the linenfold panelling, that he is done for.

There are delays – one in the form of a garrulous Shakespearean gaoler. But when the crisis comes, it is very fast – a gust of wind, a hat, a child and suddenly, like a scene from The Godfather, Cromwell realises, a beat after we do, that the men walking beside him are no longer his fellow consiglieri: they have become his captors.

Emotionally devastating, formally triumphant, this trilogy ends as powerfully as it began.