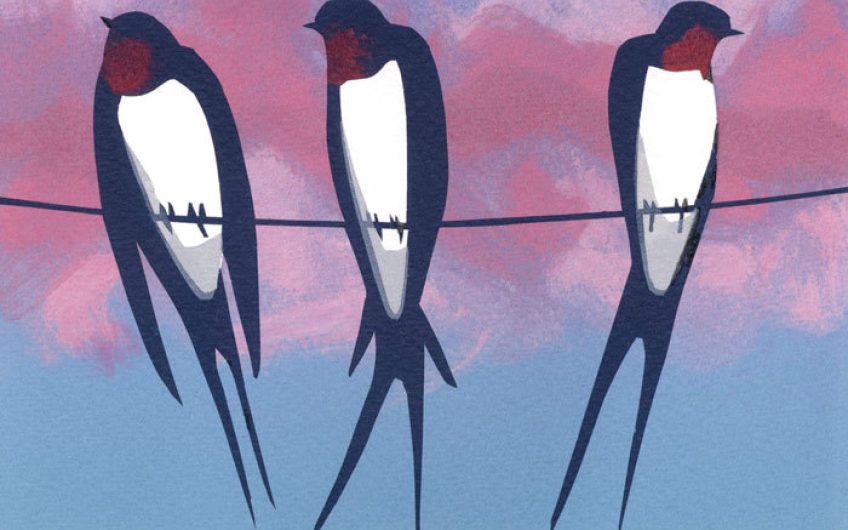 The editor kindly commissioned this article to flag up that, in August, the first 66 columns of Bird of the Month will become a book, to be published by Bloomsbury. On 1st January 2019, there were 616 birds on the official British list of wild birds, so we regard our new book as a work in progress – and there are plenty more in stock for Oldie readers.

This magazine’s founding editor, Richard Ingrams, first commissioned the page. He suggested I interview his artist friend Annie Soudain, well-known for her visionary celebrations of East Sussex coastal landscape and its flora and fauna, which resulted in a memorable day at her house near Hastings – magnificently positioned on a headland overlooking the Channel and France.

The visit was in September and coincided with what Germans call a Zugunruhe or migratory massing of swallows and martins. That prompted me to ask Richard if he would consider a quarterly bird page, with Annie – if she agreed – illustrating a bird appropriate to the season.

My credentials? A Berwickshire upbringing and my time as official bird adviser to The Oldie’s Kitchen Garden correspondent Simon Courtauld, when he edited The Field. Richard immediately commissioned a monthly page to be called Bird of the Month, The Oldie’s answer to page 3 of the Sun.

Everybody seems to write about birds these days, presumably because so many species are in serious decline. Mark Cocker’s classic Birds Britannica (2005) was the exemplar – factual information spiced with anecdotes, jokes and literary quotations, illustrated with photographs. The more poetry-dependent Bird of the Month called for an equally imaginative picture by an artist.

Annie accepted and in May 2014 we began with her cuckoo chick being fed by its foster-mother sedge warbler, and due acknowledgement to P G Wodehouse’s advice: ‘ “My boy,” I remembered Fiat Justitia saying to me once… “You must not run before you can walk. Begin, like all the great masters, with the cuckoo.” ’

The pattern of selection evolved: a mix of song and woodland birds, crows, birds of prey, game birds, wildfowl, waterfowl, waders and seabirds – each appropriate to the month, whether migrant, like the May cuckoo, or resident, like the December robin. When Richard’s editorship ended in 2014, Annie also left.

Finding a replacement was a tall order. The obvious person was Carry Akroyd, the landscape artist – a leading light of the Society of Wildlife Artists and the annual Bird Fair; illustrator of the 2014 book of the popular Radio 4 series Tweet of the Day: A Year of Britain’s Birds. She was and is also President of the John Clare Society – Clare is Britain’s foremost writer of bird poetry.

It was another coup for this magazine when she accepted; and a happy start when she and the new editor, Alexander Chancellor, bonded at their first lunch, finding they both lived in Northamptonshire and were familiar with the local salutation ‘Way up, m’duck’.

Carry’s first bird was the hooded crow, suitably placed in a Hebridean landscape including the Paps of Jura. Localised species have been mixed with the familiar, the rare and the spectacular. The great bustard (May 2019) is the rarest (70 known wild birds) to have featured. It was registered self-supporting this year.

With Alexander’s tragic and sudden death, Harry Mount was happy to give the page a fair wind, being a bird enthusiast himself. His knowledge since boyhood of >span class="s3"> gracing 2018’s Christmas issue.

Many readers will know Carry’s popular calendar of the page, which first appeared in 2016. The book is its logical extension. The title, A Sparrow’s Life’s as Sweet as Ours, is a line from John Clare. The magazine texts have been factually updated and lengthened. Uniformity required Carry to reinterpret Annie Soudain’s 2014 birds.

I misunderstood when I was first asked to do an illustration for The Oldie’s Bird of the Month: I thought it was to fill in for one month they were short. Realising it would be a monthly task was an unfamiliar feeling; it was decades since I’d had any regular work.

Normally my output as a visual artist is centred on landscapes, but birds have always hopped or flown into my pictures. Like birdwatching, drawing outdoors occupies a still and silent time, when you notice everything around you. I have always grappled with that elusive notion we call sense of place, as seasons, weather, time and mood change everything, but something about the birds seems a constant. To watch them is to understand place as ecology and habitat.

Two significant developments for me were, in my 30s, realising certain bird species in my locality were disappearing dramatically and, in my 40s, being given binoculars. These cemented my interest – but not to the extent that I became a dedicated birder; for me, landscape is the principal subject.

So when John tells me which bird is up next, it is always the context in which I had my longest, clearest and most typical viewing that springs to mind.

Usually John lets me know which bird he has chosen to write about a healthy distance ahead of the issue month. But if it is a migrant, sometimes it hasn’t arrived in time for me to see it before due date. So I am reliant on my past acquaintance.

It’s not just about what the bird looks like in its shape and plumage. Is it a social bird that would never be seen alone? If so, does it need to be a crowd scene? Maybe the bird is confined to northern coasts, or it’s seldom spotted north of the Trent. It may be an elusive character with a very specific and limited habitat requirement, or a flexible type, at home both in town and in the country.

Serigraphy, or screen printing, is my favoured method, and I work in a really basic fashion: pretty much how I learned to do it in the Sixties. For each layer, the colour is guided into the right place by means of a thin paper stencil. I fashion this stencil with scissors or a scalpel, or tearing, to decide where the ink will be deposited. The first layer of colour is printed through the stencil maybe ten times, and the ten prints spread out to dry. Meanwhile I cut the stencil for the next layer. The second colour creates a third where they overlap; so, even in four layers, things can get quite complicated.

Sometimes, in the end, I add a bit of coloured pencil here and there – only if the image demands it. On a good day, all ten images work out. On a bad day, I may end up with four, and some rather high-quality scrap paper.

For the book, the birds are grouped by season and, within each season, they are organised to accentuate variety. I’m looking forward to seeing them all together between hard covers – and at the Chris Beetles Gallery show.

A Sparrow’s Life’s as Sweet as Ours (Bloomsbury) is published on 7th August 2019. Show of the original serigraphs at Chris Beetles Gallery, London SW1, 7th-31st August 2019