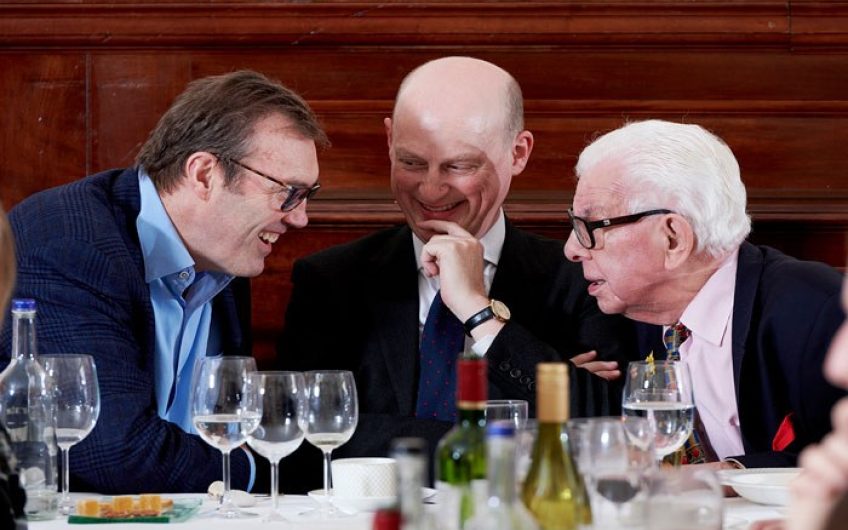 Two days after the solemn ceremonies of Remembrance Sunday, Oldie readers gathered at Simpson’s-in-the-Strand for the more jovial atmosphere of an Oldie Literary Lunch. All attendees were thrilled to welcome Andrew Morton, a great friend of The Oldie, back to Simpson’s after he, as the Editor put it, so ‘nearly laid down his life’ in service to the mag, at a lunch earlier this year when he fainted mid-speech. Joining Morton on the top table were Miles Goslett and Dan Snow.

After another sumptuous Simpson’s feast and the observance of Barry Cryer’s parrot joke ritual, the speeches got under way.

Miles Goslett was the first to speak. Before getting stuck into the subject of his book, An Inconvenient Death: How the Establishment Covered Up the David Kelly Affair, he made a brief and pertinent case for the importance and necessity of investigative journalism. He then gave a gripping account of the alleged conspiracy, hidden files and dodgy autopsies that marked the David Kelly affair.

Most astonishing, perhaps, was Goslett telling us that Tony Blair set up the Hutton inquiry before any medical professionals had even seen Kelly’s body. Consequently, he said, testimony from what would have been a microscopic examination by the local coroner was superseded by that of an inexperienced Home Office pathologist.

Fresh from his BBC reportage of Remembrance Sunday, Dan Snow read us a few facts from his book On this Day in History. The title is pretty self-explanatory: the book contains a historic fact for every day of the year. Downheartedly, Snow admitted that despite the years of toil that went into the book, most people only pick it up to look at their birthdays. After a brief outline of the historical focus of his childhood and the Stockholm syndrome that brought him back to history, he opened up to requests from the floor. After a couple of readers had called out their birthdays: 27th November, the day that the Mayflower arrived in America, and 19th December, the day William Pitt was made Prime Minister.

Barry Cryer prayed silence and made his bid: 23rd March. Poor Barry. It turns out that his birthday is on the same day as the passage of the Enabling Act: the legislation that gave Hitler absolute power over Germany.

Fortunately, Snow ended on a more cheerful note: an anecdote about the Duke of Wellington; specifically, the Duke’s response to his firstCabinet meeting as Prime Minister: ‘Rather extraordinary meeting. I gave them their orders, and afterwards they wished to stay around and discuss them.’

After Snow’s talk and another of Barry’s poetic introductions, Morton took up the microphone. He began where he left off in May: Meghan Markle’s walk down the aisle. Turning to the subject of his latest book, Wallis in Love, he pondered what it was that had so smitten the once-king, Edward, Duke of Windsor. In spite of how Edward worshipped her, Wallisapparently held him in complete contempt. In interviews conducted with the Duke’s former nurse, Morton discovered that in his last sickly days, he called out to her from his bed, ‘like a child calling for its mother’; a call she never answered. In her own words, Herman Rogers, her friend’s husband, was the only man she ever loved, a sentiment she expressed to Rogers’s soon-to-be-second wife, no less.

Once again, we owe a huge thanks to the staff of Simpson’s for their fine fettle and help, but and similarly to Noble Caledonia, without whose generous support we could not put on our world-class lunches for such reasonable prices.