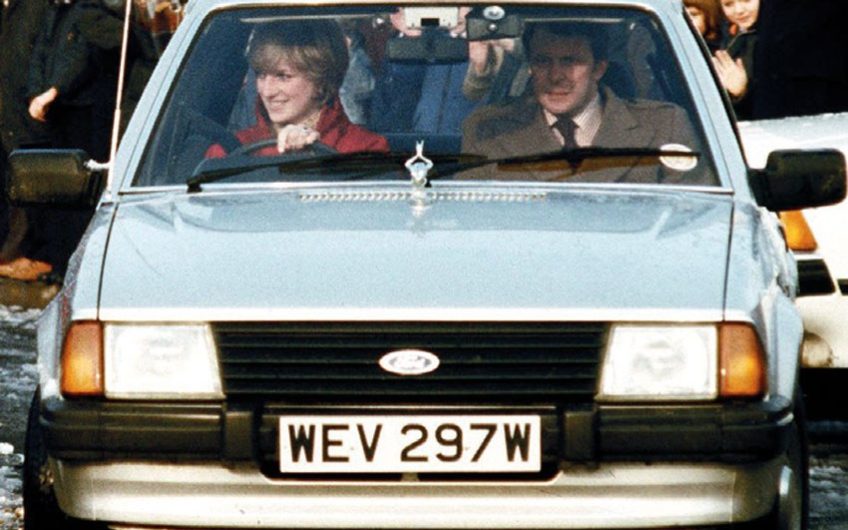 Fit for a princess: Diana and her Ford
View Full Size
1
of 1

Her royal runabout has been sold for a fortune. Roderick Gilchrist recalls the day he bought the car and roared down the M1 in it

I had to laugh when I read that Princess Diana’s old Ford Escort Ghia has just been sold at an Essex auction for £52,000.

The last time I saw the royal runabout, I was strapped into the passenger seat, terrified for my life. I was hurtling at 100mph down the M1 in the early hours of the morning in the teeth of a storm, being driven by Lord Rothermere’s chauffeur, affectionately known to all as Maltese Joe.

‘For God’s sake, Joe,’ I yelled above the crack of thunder, ‘You’ll smash the car and we’ll both be killed. Diana wouldn’t want that.’

It was April 1988 and I had just handed over £10,000 of Lord R’s money for the silver Escort with the frog mascot on the bonnet to be offered to Daily Mail readers as a circulation-building prize. Of course the late Lord Rothermere, who owned the paper then, didn’t know any of that.

Although at the time I was Executive Editor of the Mail, in charge of news, I had had some success suggesting competition ideas with snob appeal and strong Royal association – catnip to aspiring, middle-class readers. First, at a Sotheby’s auction we bought £250,000 worth of the Duchess of Windsor’s jewels given to Wallis Simpson by Edward VIII before their marriage.

Next I bid £185,000 at Bonhams for the American Buick he romanced her in and indeed was driven into exile in on his last trip from Buckingham Palace.

The Windsor jewels were a runaway success, putting 100,000 new readers on the circulation every day for the five weeks. The figures were propelled by major stars of the day such as Farah Fawcett, Glynis Barber and Fiona Fullerton. They dragged up in period costume and wigs with the Cartier rocks to look like Wallis, for photo spreads in the paper.

The 1936 Buick – we dubbed it the Love Limousine of the Century – had a more bumpy ride than the jewels, breaking down three times after the sale while being driven across Blackfriars Bridge. Unfortunately, this was all photographed gleefully by a trailing rival snapper from the Daily Express, which published pictures of the stalled motor under the larky headline ‘The Buick stops here … and here … and here’.

The jalopy proved to be an accident waiting to happen. While it was being filmed for a TV commercial, a giant Klieg light exploded, setting fire to the back of the car. That meant an overnight respray, before TV-am presenter Anne Diamond on her show next morning drooled live over the auto in front of the cameras. ‘Whatever you do, Anne, don’t touch the cellulose on air,’ I warned her. ‘It’s still wet.’

None of these adventures prepared me for the night I was sent north to buy Diana’s car. It had been a present from Charles 40 years ago, in May 1981, before the couple’s 29th July wedding, and Diana continued to drive it until August 1982, after the birth of William on 21st June.

David English, then editor of the Mail, excited by all the drama of the jewels

and the Buick, wanted me to snap up the Ford before it reached auction. He ordered me to the home of John Gibson, a gas-fitter from Leeds whose council house overlooked the football ground. He had picked it up for £6,000 and wanted to turn a quick profit.

In those days, the cashiers of Associated Newspapers dolled out lolly on receipt of a signed chitty. That’s how most reporters drew down their expenses, usually flaunting the greenbacks before jealous printers.

I drew £10,000 in one-pound notes because they made a bigger bundle than £20 notes – more impressive, I reckoned, when stacked together for somebody who had never seen so much money in one place. I packed all the cash into an attaché case and set off for Leeds, with Maltese Joe at the wheel.

Mr Gibson, surprised by my knock at his door, welcomed me into his kitchen but initially declined my offer of spot cash, saying he preferred to go to auction.

I made it clear I wasn’t prepared to haggle and flipped open the briefcase. ‘Look, mate, there’s ten grand there,’ I told him. ‘You’ve got 20 seconds to take it or I’m back down the motorway.’

Mr Gibson’s eyes fell on the cash. He didn’t even answer and just handed over the keys with a laugh.

Maltese Joe put his foot down all the way back to London, pushing the needle off the dial.

We worked the same glamour trick on the Escort as we had with the jewels and the Buick. We photographed the car Diana drove in her journey from Sloane Ranger to princess, alongside celebrities and aristos such as actress Tracy Ward who had just married the Marquess of Worcester. The frog mascot was a bit knocked about, so we had a shiny new one fitted.

These were the golden days of Fleet Street, before the bean-counters took over and focus groups squeezed the juice out of inspired craziness.

It’s sad, though, that Diana’s Escort and its frog mascot, a memory-jogger from a more colourful era, is now a static museum piece – in faraway Chile, of all places.