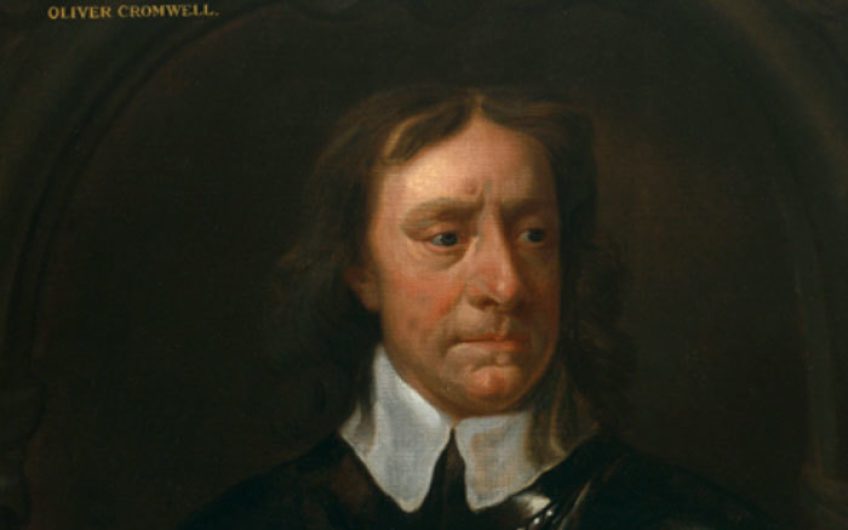 ‘Christmas is Cancelled,’ announce the seasonal cards on sale at the Cromwell Museum in Huntingdon.

The fenland town, where the Lord Protector was born in 1599, is still abuzz with the question of who is its greatest Member of Parliament – Oliver Cromwell or John Major. Locals also ask, ‘Did Cromwell really ban Christmas?’

Cromwell was then just an MP turned cavalry officer, playing a leading role in the New Model Army’s victory over Charles I.

Still, Cromwell must have approved of the ban, because it continued under his rule as Lord Protector of England from 1653 to his death in 1658.

The attack on Christmas proved to be one of the Parliamentarians' biggest mistakes. As one pamphleteer put it, ‘Frand festivals and lesser holy days... are the main things which the more ignorant and common sort among them do fight for.’

The ban was bitterly resented across England and Wales, where the people kept true, by and large, to their Church, its feast days and the Book of Common Prayer.

Hardline Puritans believed, with some justification, that the celebration of Christ’s birth was no more than an excuse for drunkenness and debauchery. They renamed Christmas ‘Christ tide’, to avoid any reference to the Roman Catholic ‘Mass’ and deemed it an ordinary working day. Eating a mince pie or singing carols was made illegal.

In London, the Puritan heartland, zealots such as John Barkstead, Governor of the Tower, prohibited festivities with such severity that some wondered whether ‘they shall be suffered to be Christians any longer or no’.

For four years during the 1650s, the diarist John Evelyn, an Anglican, would scour the capital for Christmas Day services and, in 1652, managed to find an ‘honest’ divine who preached at Lewisham on Boxing Day. He was less fortunate in 1657, when he and his friends were placed under arrest by a troop of soldiers. Why, he was asked, was he ‘at Common Prayers, which they told me was but the mass in English, and [where they] particularly pray for Charles Stuart [Charles II].’

Despite such crackdowns by the regime, Christmas carried on. Ezekial Woodward, an Essex preacher, admitted that ‘the people go on holding fast to their heathenish customs and abominable idolatries, and think they do well’.

Such persistence of festivities was noted with some disdain by those few MPs – predominantly Puritan – who attended the House of Commons on Christmas Day in 1656. One complained that he had been disturbed the whole of the previous night by the preparations for ‘this foolish day's solemnity’.

Cromwell’s flamboyant and charismatic deputy, John Lambert, warned them that, as he spoke, the Royalists would be ‘merry over their Christmas pies, drinking the King of Scots health, or your confusion’.

Brian Duppa, one of the few Anglican bishops to keep his post during the Interregnum, observed that his congregations continued ‘to offer up the public prayers and sacrifices of the Church, though it be under private roofs’. He had not heard of any of those present ‘either disturbed or troubled for doing it’.

Duppa, like many Anglicans, was keen to pounce on the inevitable hypocrisies of the more zealous puritans: ‘Though the religious part of this holy time is laid aside, yet the eating part is observed by the holiest of the brethren’, he noted.

Hugh Peters, a Puritan preacher with sulphur on his breath, who would be hanged, drawn and quartered at the Restoration of Charles II, was charged in 1652 with preaching against Christmas Day but then eating two mince pies for his dinner.

Though churches and shops were forced to close by the authorities, in 1652 the newsletter, Flying Eagle, reported that ‘taverns and taphouses’ were full on Christmas Day, with ‘Bacchus bearing the bell amongst the people as if neither custom or excise were any burden to them’. The poor, it was claimed, ‘will pawn all to the clothes of their back to provide Christmas pies for their bellies and the broth of abominable things in their vessels, though they starve or pine for it all the year after’.

In 1654, the Weekly Post reported the decoration of churches with rosemary and bays. That year, Francis Throckmorton, a student in Puritan Cambridge, paid sixpence for music and gave Christmas boxes to his servant, tailor and shoemaker. Three years later, he spent Christmas at a country house in Worcestershire, where he exchanged presents and gave money to musicians and mummers. In 1657, Evelyn invited in his neighbours after Christmas, ‘according to custom’.

Old habits flourished the further you got away from Whitehall. The Welsh, tucked away safely in one of the darker corners of the realm, kept stubbornly to their unrepentant Christmas celebrations. ‘Where is there more sin to encounter with, where more ignorance, where more hatred to the people of God? where the word saint more scorned? than in Merionethshire,’ complained the Puritan John Jones in 1651.

The Puritans and their leader Cromwell, a man of Welsh roots – his real surname was Williams, no less – never really knew their people.