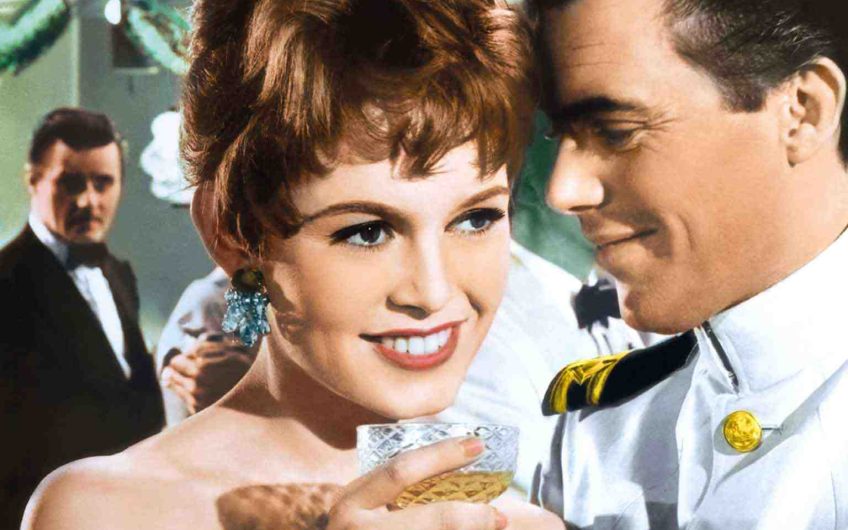 Doctor in love? Bogarde with Brigitte Bardot in Doctor at Sea (1955)
View Full Size
1
of 1

Roger Lewis celebrates the centenary of a sad, dark actor who matured into a happy writer

Particularly when he was Simon Sparrow in the Doctor films (‘What’s the bleeding time?’ – ‘Ten past ten, sir’; ‘Big breaths’ – ‘Yeth, and I’m only thixteen’).

The other medical students, Donald Sinden and Kenneth More among them, hare about, delivering their lines at a breezy clip, but Bogarde underplays – he is almost brooding, certainly priggish.

The role was an ‘absolute turning point’, he agreed later, ‘which secured me in my profession.’ By 1955, Bogarde was billed as the Idol of the Odeons. Cinema managers voted him ‘the World’s Greatest Money-Drawing Star’.

Nevertheless, his dark sullenness quickly edged into mannerism and camp. He was the first to admit this. Catching a clip of The Singer Not the Song at a BAFTA tribute, he was astonished to see ‘a very poovy person in black leather making eyes at John Mills’.

Bogarde was always ornate. One is very aware of him as an actor – his lustrous dark hair, posture and fluttering hands. He never troubled to conceal his vanities. There is a stagey emphasis.

He liked to stand out – expected deference; was histrionic. Daphne du Maurier, for instance, was appalled at the way Bogarde portrayed her husband, General Browning, as ‘a poofy waiter’ in A Bridge Too Far.

Yet, alongside the excessive and artificial performances (Ill Met By Moonlight, Song Without End, Modesty Blaise), Bogarde could be immensely detailed, subtle, emotionally true, conveying what David Warner, who co-starred with him in Providence, called ‘an ice-thin veneer of unhappiness’.

After The Servant, Accident and Darling, however, Bogarde was encouraged to take himself rather too seriously.

The screenplays of Harold Pinter, in particular, brought out a resentment and malice in his characterisations that never went away. The mingled joy of Bogarde’s many volumes of autobiography and letters is that we see how, behind the brittle, over-urbane façade he created for himself on screen, Bogarde was a spoilt little uber-bitch in real life also, prickly and impatient and not unlike his own description of film critic Alexander Walker as ‘a stupid old faggot’.

He was born a century ago, on 28th March 1921, as plain Derek Jules Gaspard Ulric Niven van den Bogaerde, the family allegedly descending from Anne of Cleves. His father was a Fleet Street art editor and, after a brief period in Sussex, the future actor was sent to be educated in Glasgow, where he lodged with impoverished (maternal) relatives.

There was a stint at drawing schools in London, where he painted the scenery for student shows. Bogarde’s debut was as an extra in a George Formby film, Come On, George, in 1939. Life thus far had taught him that ‘being happy and obliging and fond of everyone was a sign of weakness’.

‘Rank wants me for something,’ he told his sister in 1945, but he was never to be jubilant about his career. ‘I DETEST the work, I detest the job, and most of the time I detest the people,’ he remarked sweepingly of the commercial cinema, which he felt for some reason was far beneath him.

Bogarde dreaded the thought of becoming like Richard Burton, who has ‘the charm of a dead baby’, or Alan Bates (Alice, as Bogarde called him), whom he deemed ‘as virile and sexual as a packet of Kleenex’.

He thought the problem could be solved by his leaving England in 1969 to find ‘more satisfying work’ in Europe, where he reported for duty with Luchino Visconti, Alain Resnais, and Rainer Werner Fassbinder.

Yet surely Bogarde’s notorious Von Aschenbach in Death in Venice isn’t a patch on his performance, a decade earlier, in Victim, with Dennis Price, which followed ‘the break-up of a man’s marriage and life owing to the fact he is flawed by homosexual tendencies’ (Bogarde’s own summary).

The Visconti classic, by contrast, is simply a lot of snuffling and wincing and staggering around the canals in a white suit. Bogarde flaps a napkin and sips at his soup to signify the suffering and fastidious artistic soul. I certainly prefer his Nazi in The Night Porter: as Bogarde puts it, ‘being straddled by beloved Miss Rampling with an entire Italian crew watching and eating pizza’.

After a spell in Rome, Bogarde and his boyfriend – or manager, as he insisted on pretending he was – Tony Forwood, who was Glynis John’s ex-husband, bought Le Haut Clermont, a farmhouse in Provence, situated on a hill amongst olive groves.

His memoirs tell us much about the restoration and maintenance of this idyllic spot – the haymaking, weeding, watering and raking. Their neighbours, the Attenboroughs, made such a noise squealing in their pool that Bogarde planted a forest of bamboo as a boundary.

Guests, who were fed cold Heinz Spaghetti on a silver salver, and other luminaries were gossiped about mercilessly.

Kenneth Tynan wore ‘some plastic python and shoe buckles large enough to frame a Velasquez’ and was mocked for his ‘pink-tinted, stuttering, wet-lipped face’.

Glenda Jackson was Glenda Sludge, ‘with feet like a goat-herd’. In fairness, Bogarde did later come to admire her no-nonsense attitude to life (‘bloody marvellous’), unlike Prince Charles (‘he’s really got awful little eyes’), the Queen Mother (‘NOT all chuckles and meringues’) and the Duke of Edinburgh (‘Christ. He’s as jolly as an open coffin’). Even I turned up as prey. ‘Poor Larry O’ – a reference to my Olivier biography.

As the film roles began to dry up and all he was offered were parts as elderly sex perverts and schoolmasters, and scripts already rejected by Alec Guinness and John Gielgud, Bogarde turned himself into a bestselling author.

Yet it’s the many volumes of autobiography that were shot through with fiction.

Bogarde was far from being a reliable narrator of his own life. As John Coldstream, his biographer, says, after quoting a typical bit of boasting about wartime heroics, ‘Dirk never fought in the jungles of Japanese-occupied territory. He consistently romanticised his military career and used others’ experiences as his own.’

His knowledge of Belsen, for example, came from newsreels and ‘what was conjured in that ever-active imagination’. Bogarde’s actual military career amounted to his guarding an empty hotel on the front at Worthing.

Despite the lies and evasions (Bogarde had an old-fashioned fear of being exposed as a homosexual – Forwood is patronisingly portrayed in the books as a kind of offstage batman or jobbing gardener), his stuff shot up the bestseller charts.

He much enjoyed the trips back to the Connaught for the launch parties and the book-signing tours. Thousands of old ladies whom he imagined kept ‘beech leaves and bluebells in a copper jug’ sent fan letters on Basildon Bond.

In 1987, however, Forwood was diagnosed with cancer and, as Bogarde said of the French retreat, ‘We can’t hang on here much longer.’

Bogarde sold the house and his possessions, burnt his papers, arranged for the dog to be put down, and ended up in a succession of flats in Kensington and Chelsea, finally coming to roost in ‘a small cabin stuck on top of an Edwardian mansion’ in Cadogan Gardens. He then had a stroke – and soon afterwards Forwood died.

‘The pain is starting right in now,’ he allowed himself to concede. ‘For love it was … is.’

He was never fully candid about this relationship, however, and remained at variance with himself. Helena Bonham Carter, who worked with him in 1988, said of Bogarde, ‘He would always make out he was a macho heterosexual. He was really a hunk of self-denial.’

Barbara Murray recalled, ‘He kissed me on the cheek and pissed off.’ Elaine Stritch was warned, somewhat unnecessarily, ‘I don’t want any knocking on my door at 3am.’ During the war, Bogarde seemingly had girlfriends but, as a contemporary remarked, ‘We never saw them kissing or anything like that.’

Women were always ‘a sort of camouflage’ – and what’s notable even about the jaunty Doctor films is the way Simon Sparrow, in scene after scene, fends off girls, from Joan Sims, munching an apple, to Brigitte Bardot, nude in the shower.

When Sue Lawley, after a tetchy Desert Island Discs encounter, concluded, ‘He seemed resentful. The world had done him wrong,’ the chief cause of the overriding sourness was his sexual nature – perhaps anyone’s sexual nature. Barbara Murray was shocked at how ‘he’d talk about the sexual act between a woman and a man with real distaste’.

Bogarde would not thank anyone for making the comparison, but his fastidiousness and disdain, his bitterness, misogyny and essential loneliness put me in mind of Kenneth Williams, who also wrote lots of catty letters, who preferred keeping a distance from everyone, who was never temperamentally content – and who had his detractors as well as fans.

‘There was vituperation on his face … I really thought he was a horrible creature,’ said Michael York’s wife, Pat, when she first met Bogarde, who was perhaps punishing her because he’d had a crush on her husband when they’d made Accident, with Pinter and Joseph Losey.

Against the odds, though, in his final few years, as he adjusted to living alone, Bogarde, knighted by John Major, revealed or discovered a humility that had up till then seemed lacking.

Though he said he found the English ‘petty-minded, mean, spiteful, arrogant, fearful and terrified of anything foreign or unusual’, he was suddenly remarkably free of these traits himself.

Despite claiming, ‘I hate social life now,’ he didn’t mind meeting film historians, as ‘I am about the only living relic who remembers Joseph Losey, George Cukor, Luchino Visconti, and now Fassbinder.’

He attended literary luncheons, recorded talking books for the blind, gave talks to schools about his (dubious) first-hand knowledge of the Holocaust, and held acting master classes with students at the Old Vic and Guildhall (‘None of them has a hope in hell’).

Taxi drivers made a fuss of him and geriatric fans followed him around Tesco: ‘He’s buying tinned tomatoes!’

Bogarde died in May 1999, aged 78, gratefully remembering the luxurious times he’d had aboard transatlantic liners, the servants in Hollywood with white gloves and silver platters, the locations in snowy Austria, and the people he’d cherished, such as Judy Garland, Ava Gardner, Graham Sutherland and Noël Coward.

30 OLDIE CLASSICS FOR OUR 30TH BIRTHDAY! (22/30) The Duchess of Argyll was a lovely stepmother-in-law – Lady Colin Campbell