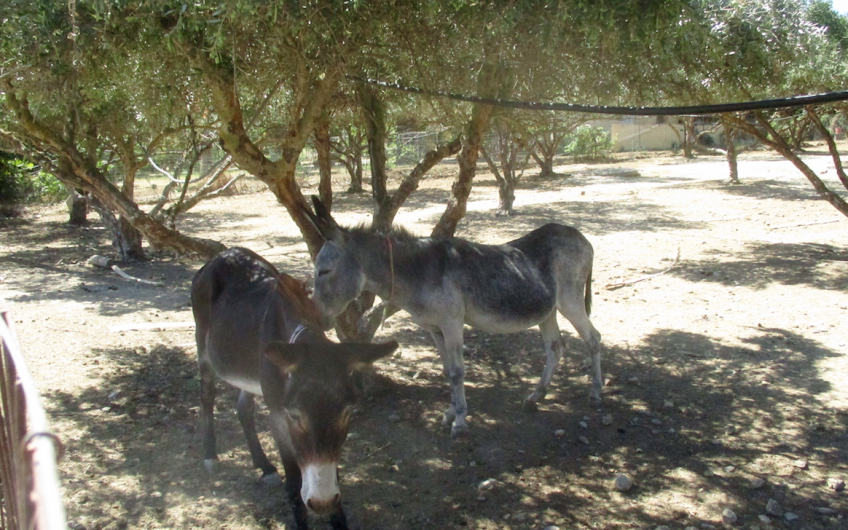 At an age when most of us are thinking of at least semi-retirement, Barbara Doulgerakis, 68, and her husband, Fanis, 72, work not only at running an olive farm in the sunbaked countryside near Pitsidia, in southern Crete, but also, alongside it, the Agia Marina Donkey Sanctuary.

Crete has never been an easy place to be a donkey, and it’s even harder now. In the past, donkeys were worked hard as beasts of burden; but with ‘progress’, they are becoming surplus to requirements and often abandoned.

A look at the residents of the sanctuary – now well fed, cared for and happy to mooch about in the shade of the olive trees – tells the story better than anything else can.

Pandora is the oldest donkey here, at 42 (donkeys can live to the age of fifty but they suffer badly with arthritis and tooth decay); Areti had a stroke; Naomi is blind; Phaedra’s back legs are stiff and paralysed; and Apollo came from a circus that closed down. Poor Nefeli has a sunken back, damaged from being made to carry heavy loads when she was too young to do so. And Stefanos used to work for a monastery; for 25 years he went up and down a mountain delivering its supplies – on his own. The monks finally decided it was time he retired. The youngest resident, born here, is Minoas – a handsome little donkey just two months old.

The sanctuary has been open for 15 years. It currently has 24 donkeys (and has sometimes had up to 30)

Barbara said, ‘My father-in-law always had donkeys. When he got too old to look after them, he had two little ones and we brought them here to the farm. People would call in and say: “Can we bring our donkey here?” The sanctuary just happened. People don’t have time to look after them any more. If we weren’t here now, they would simply die.’

Feeding the donkeys costs €3 per head per day. The sanctuary is open to the public and entry is free. But it doesn’t do donkey rides or have a café or any of the theme-park trappings that would be anathema to Barbara and Fanis. They rely on donations from visitors, the generosity of sympathetic vets, charitable aid, and their own never-ending hard work.