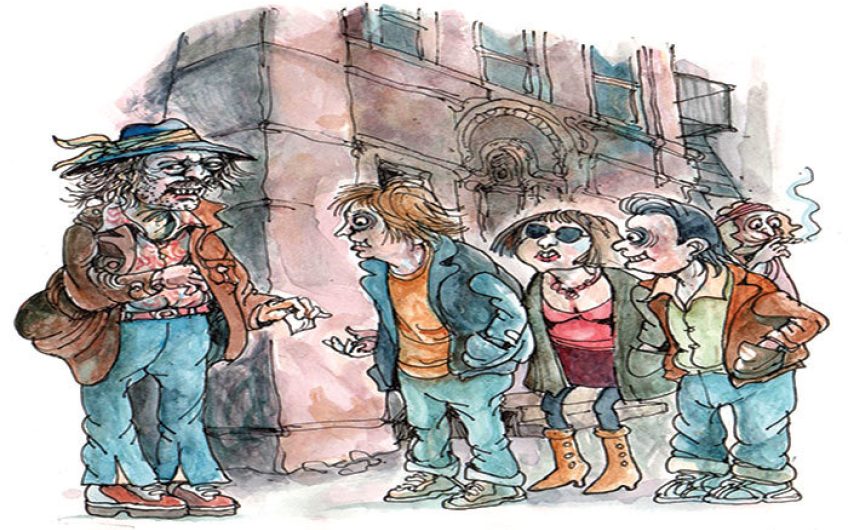 It’s more than fifty years since Tom Lehrer wrote his wonderfully transgressive songs. One of my favourites, sung by us spotty teenage boys to irritate masters on school bus journeys to cricket matches, was ‘The Old Dope Peddler’. It celebrated the life of the drug dealer, who was ‘doing well by doing good’.

What would happen if Lehrer were to write a similar hymn of praise to a drug dealer today? Some MP would probably call for it to be banned and there would be much wheezing about it on Question Time, but have we reached the point when a hymn to dope peddlers might no longer be seen as satirical? That thought is prompted by the publication of a crime fiction book set in Wales called The Score by former cannabis smuggler, Howard Marks. On the cover he is described as ‘Britain’s best-loved retired dope dealer’. Howard is the very charming Welsh grammar school boy who went to Balliol, became Britain’s busiest cannabis dealer, got busted, was sentenced to twenty years in the United States and emerged to write a best-selling autobiography, Mr Nice, which recently became a light-hearted film starring Rhys Ifans. I interviewed him when he was serving part of that sentence in Terre Haute federal penitentiary in Indiana, and was struck by how friendly the prison officers were when they found out whom I was visiting. ‘Ah, you’ve come to see Narco Polo,’ they chuckled.

Howard taught English to the inmates and ran evening classes in philosophy. (His pupils included Mafia men, so he could honestly claim that he was teaching philosophy to the Dons.) I last saw him at the Harrogate Crime Writing Festival a few years ago, delighting a large and youthful audience with tales from his past. Since then there have been two novels and more public engagements. Spreading joy wherever he goes, indeed.

Go back a century or so and you can chart the development of our attitudes to dope peddlers. During the First World War, the Times carried advertisements for the Mayfair chemist Savory & Moore’s gelatine sheets impregnated with morphine and cocaine, which were promoted as ‘a useful present for friends at the front’. But that attitude was soon to change. The night after the Victory Ball in the Albert Hall in 1918, an actress and singer called Billie Carleton died of a suspected cocaine overdose. Her supplier, Ada Ping You, described by the presiding magistrate as ‘the high priestess of unholy rites’ was sentenced to five months’ hard labour for her role.

Soon the focus of press attention was on a Chinese restaurateur known as Brilliant Chang, who, according to the World Pictorial News, had an ‘obsession with white women’ to whom he would give drugs and demand that he be paid in kind. ‘It is you and men like you who are corrupting the womanhood of this country,’ the Recorder of London told him when he was eventually jailed a few years later.

He had to abandon his restaurant in Regent’s Street, was deported and, according to a lip-smacking report in the Daily Telegraph, ended his days ‘not in luxury and rich silks but as a sightless worker in a little kitchen garden’.

The other notorious dealer of the period was Eddie Manning, a Jamaican who supposedly had a silver-topped cane packed with drugs. The News of the World hailed his arrest in 1923 with the headline ‘Evil Negro Caught’. After being picked up once more for possession of goods stolen from Lady Diana Cooper’s car, he was described by the arresting officer as ‘the worst man in London’. He died in Parkhurst Prison hospital. In 1928 the News of the World reported on a band of young men who had been inspired by ‘Sapper’, the creator of Bulldog Drummond, and had formed a team to grab ‘dope peddlers and other crooks’ who were infesting the West End and take them off to a garage off the Great West Road where they were flogged with dog whips until promising to mend their ways.

The dope dealer continued as this sinister, usually alien, figure throughout the Fifties. Superintendent Robert Fabian – ‘Fabian of the Yard’ – shared his thoughts on the trade in his 1954 memoir London After Dark. ‘Coloured fellows... they have the brains of children and can only dimly know the cruel harm they do these teenage girls who dance with them and try thrilled puffs at those harmless-looking marijuana cigarettes.’ Fabian helpfully explained how to spot a Chelsea drug addict: ‘...the middle-aged woman with dyed hair streaked with grey. She wears black corduroy trousers and a purple utility box jacket.’ Even as comparatively recently as 1957 the Times was warning that ‘the potential moral danger is significant since a principal motive of the coloured man in smoking hemp is to stimulate his sexual desire.’

The dealer remained a dreaded and evil figure, at least in the world of the mainstream press, throughout the Sixties and most of the Seventies. So when Howard Marks and a bunch of his compadres first appeared at the Old Bailey in the early Eighties on cannabis smuggling charges, there was some puzzlement, since these educated young men did not quite fit the bill. ‘Eggheads ran £20 million drug ring’ was how the Sun described the case. The jury even acquitted Marks, and it was not until the US Marshals went after him that he ended up behind bars for any length of time.

There had also been plenty of ‘eggheads’ in the dock in the wake of Operation Julie, a few years earlier. This was the largest ever LSD-dealing operation, much of it centred in Wales. Some of those involved were as much interested in changing people’s perceptions through acid as in making lots of money. One of them, Leaf Fielding, has just written his account of those days, To Live Outside the Law, in which he explains how evangelical they were, ‘in the pursuit of a global expansion of consciousness’.

In 2012, a couple in their sixties, Michael Foster and Susan Cooper, were jailed at Lincoln Crown Court for selling large quantities of marijuana which they had grown on their farm. It transpired during their trial that they had given away much of their profits to a hospital and a school in an impoverished part of Kenya. The judge who weighed them off told them: ‘I am sure you were doing good things in Kenya with your drugs money. Whether that was to appease your conscience, I can only speculate.’

The comedian Lenny Bruce used to suggest in the Sixties that, when all the dope-smoking law students became judges, drugs would be legalised. That hasn’t happened – but the days when all drug dealers were seen automatically as the incarnation of Evil may well have passed, even if we haven’t quite reached the stage where the Times is carrying ads for drugs for us to send to ‘friends at the front’.