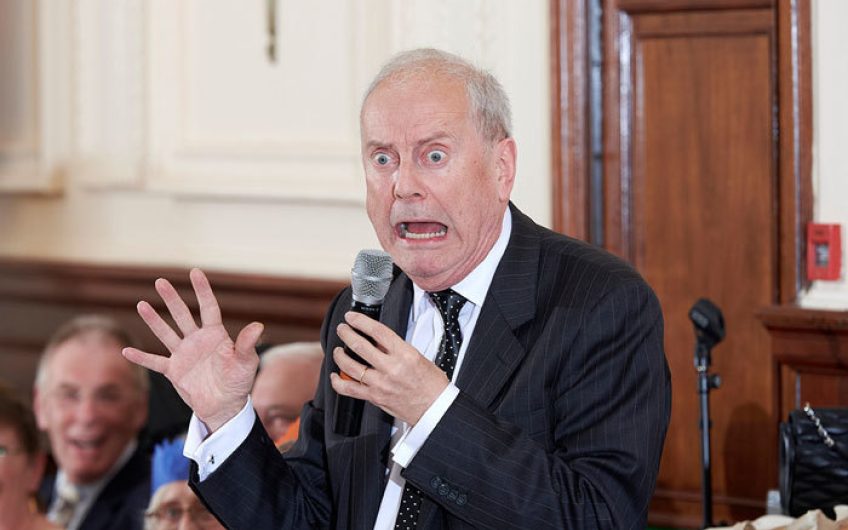 Sadly, Barry Cryer our incomparable compere was unable to join us, having fractured his hip some weeks ago. So, sadly, no parrot joke. Barry is on the mend, we’re very pleased to say.

In other news, our sacred Christmas lunch was so nearly ruined by Brexit. Had the vote on the PM’s European deal gone ahead, two of our speakers, Lord Baker and Robert Hardman, would not have been able to attend: the former would have had to vote and the latter would have had to cover it for the Mail. But, as the editor Harry Mount, standing in for Barry, put it: ‘Gibraltar may tumble, the ravens may leave the Tower of London, but the Oldie lunch must never, never be cancelled.’

Lord Baker, Margaret Thatcher’s Education Secretary, opened with a dazzling presentation on his new book, On The Seven Deadly Sins. He began with the admission that, as a fading politician, he has had to find ways of occupying his time. That he has certainly done: he spends his time setting up technical colleges for youngsters and, in his spare time, what there is of it, he writes books.

His latest is meant as a study: to see if the Seven Deadlies mean anything in the modern world. He has discovered that they are indeed alive and well.

Beginning with the origin of sin, the garden of Eden, he proceeded to examine all seven. Pride was exemplified by Admiral Tojo’s attack on Pearl Harbour and Hitler’s foolish decision to march on Moscow. Greed came in the form of Michael Douglas’s turn as Gordon Gekko in the 1987 hit film Wall Street. Lord Baker ended by putting Lord Sewel and Keith Vaz under the microscope, thanks to their somewhat unorthodox pastimes, to illustrate how politicians are subject to the big seven, even though, he said, they act no differently than many of their constituents.

Robert Hardman, the biographer of the Queen, had rushed straight from a lunch with Her Maj’s senior advisers to join us at Simpson’s, spoke next. His book Queen of the World is aptly titled. The book traces Her Majesty’s extraordinary life, strewn with her meetings with many hundreds of world leaders, including tea with Donald Trump – poor thing.

While doing research for his book, Hardman discovered some extraordinary tales: the time when the Queen was found putting a bra on her equerry, as he prepared for a role in an opera, and how naval officers, armed with tennis rackets, had to defend her person from bats that had infested her room on the Royal Yacht Britannia.

Hardman talked her influence in the world; how she is a constant, not just for us in Britain but for people all around the world. She is ‘our number one diplomat’, befriending leaders from around the world like Nelson Mandela, Barack and Michelle Obama, and, perhaps most impressively, charming the maniacal Romanian President Nicolae Ceausescu.

He began by paying tribute to his fellow speakers and their books. In his words, his book Have You Eaten Grandma? was unique among the day’s three, in that you can give it not to those you love, but to those you despise. Why? Because it is a book of grammatical drill, whipping them into shape, so that they can speak and write properly.

After a brief explanation of the title – the difference between cannibalism and filial respect – he jumped into the results of a survey of the most common forms of greeting among English speakers. The top five are: Hi; Hello; How are you?; Good to meet you; How do you do? What was intriguing was that the 22nd greeting on the list was ‘P*** off’.

The principal focus of his talk was that language is power. It is what defines us, separating us from the animals. As Bertrand Russell said: ‘No matter how eloquently a dog may bark, he cannot tell you that his parents were poor but honest; only words can do that.’

Once again, we must thank our invaluable partners – Noble Caledonia and Simpson’s – without whom we could not put on such fabulous lunches for such reasonable prices.

End of the line - Benedict King on giving up commuting