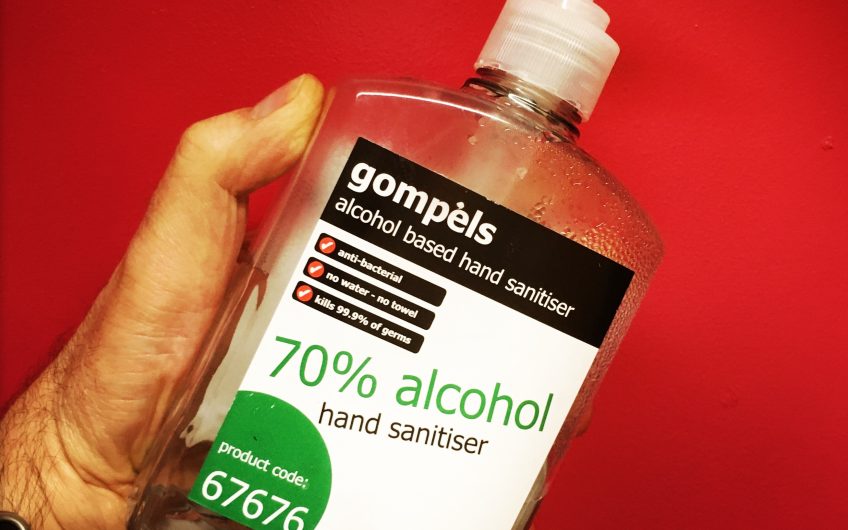 Like half of the rest of the planet, I have to say this 'new normal' takes a bit of getting used to.

Never in my wildest dreams when I was recently putting together a book (Vintage Roger) of letters my father wrote whilst a POW to a racy lady friend did I think that just a few months later I would be re-reading the very same letters looking for tips on how best to deal with 'self-isolation' and 'lock down'. Among other things, humour, generosity of spirit, good manners and tolerance combined with an attitude that 'things could be so much worse' seem fairly key to keeping relatively sane.

Fortunately I have a very charming view from my bedroom window. Being a natural hoarder (I already had for example over a year’s supply of Solpadeine and sufficient cut price fizz for several months) and a self isolator, I might have spent my entire life preparing for this very moment.

An added bonus being that my other half Tim and I have been in each other’s company almost 24/7 for virtually a quarter of a century now, whilst operating a mutual survival pact, so at least we know that we rub along OK in very close and perpetual proximity.

That said, a couple of weeks ago, unable to buy any hand sanitiser, I invented my own version loosely based around Halfords de-icer, Nivea and some very old aftershave (to give it a nice smell). I persuaded Tim to try it out, which was a mistake. After liberally applying it to his hands, he informed me that it was more toxic than anything that had ever come out of Chernobyl and minutes later reckoned it was making him itch aggressively over his entire body. Later on, he took to bed and claimed I'd poisoned him and was on the verge of major organ failure. My suggestion that he was possibly being a little overdramatic was not well received.

Today whilst passing the time guessing how many number 22 buses would pass my window each hour I noticed that every single one of them was completely empty; so I suggested to Tim we had an adventure to relieve the tedium. “Such as what?’ he enquired. I replied, “What if we put on surgical masks and take the top front seats on a 22 bus for it’s entire journey so we see what London looks like without any traffic and a couple of hours later end up back where we started from and (God willing) by then it would be time for lunch” Rather sternly he replied “That is a non essential journey; get a grip please you’re pushing 70 not 17!”

A more popular idea was my inclusion of comfort food in our regular evening meal of tinned Waitrose soup and toast in the form of ‘Original’ Primula cheese which I last tasted in the 1970s and now conveniently comes in a tube.

Only a month ago a company of which I am one of four directors and shareholders, was doing rather well and now like almost every other enterprise on the planet, from Virgin to Hay Literary Festival or any restaurant or hotel chain you care to mention, is fighting to survive unless lucky enough to have branched out into hand sanitisers and surgical masks or ventilators

Yesterday, our lovely Irish neighbour Annette texted me, “The inside of my oven is looking rather inviting and not in a good way. Liv (her 21 year old daughter) still on the edge and has us under house arrest. She’d have done well in the Stasi!”

Recently and rather late in life I've been doing ‘stand up’ in partnership with a twenty seven year old doctor (Jonathan Iliff) who also has a first in neuroscience and who, among other things, specialises in microdosing hallucinogenics for people with depression. Our topic is mental health, Jonathan doing the theory and me the practice. At our last gig in front of around 120 students at UCL, some wag shouted "You're old enough to be his grandfather, how did you two meet?" to which I responded, "He stole me out of an old people's home!'

Rather surprisingly we were offered a small UK tour. which for obvious reasons is on hold for now but we are currently writing a book together, working title 'The Boffin and the Lab Rat'. No guesses which of the two I am. Not so long ago I overhead Tim on the phone to a friend. "If it wasn't bad enough him making a complete c**t of himself on stage amongst strangers. now he's inviting our friends along!"

Jonathan is presently and stoically on the front line of the Corona front, doing several 13 hour shifts a week in A&E.

About a month ago, which now seems a lifetime away, we went on a pub crawl with a lively lady friend from Manchester. An evening out with Jo usually consists of what I call the Manchester diet ie vast quantities of alcohol and dry roasted peanuts. Halfway through this particular evening I said to Jo (who has striking good looks, not dissimilar to Rebekah Brooks) "Now this may come as a bit of a surprise to you, Jo, but quite a few people think that I'm a total wxnker ". Without hesitation she replied "No it doesn't"; to which I responded "No, it doesn't what, Jo?"; to which she concluded, "No, it doesn't come as a surprise to me, Charlie".

On the well reported subject of the panic buying of industrial quantities of 'Andrex Quilted', I clearly remember when my father's tome 'The History of the Derby Stakes' was published in the early 1960s, a very earnest person asking him what he thought of his own book. "Well," replied my father "it's got three really good things going for it; if the leg falls off your billiards table. it's big enough to prop it up, it's too heavy for my wife to throw at me and, with the current paper shortage (which there was at the time), there is at least three years' supply of lavatory paper.'