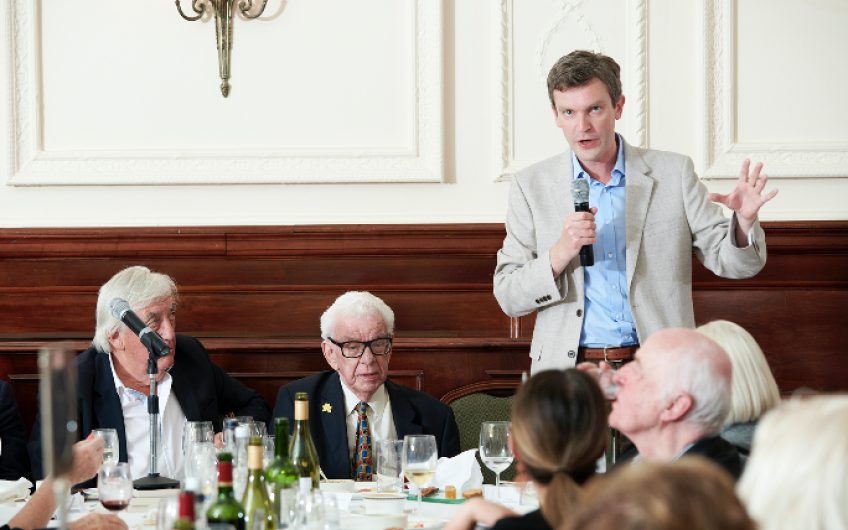 On Tuesday, Simpson’s-in-the-Strand – and Barry Cryer – hosted another of our legendary literary lunches. Following a fine meal and Barry’s ever sublime parrot joke, Andrew Morton (for more on him click here), Mark Forsyth and Bob Marshall-Andrews regaled us with tales of their new books.

Andrew Morton, ‘our very own Boswell’, as Barry put it, spoke first. His talk was about his new book, Wallis in Love, a biography of the notorious femme fatale Wallis Simpson whose true love was not Edward VIII, but a certain Herman Rogers, a husband of one of her friends. Sadly, a few minutes into his speech, Morton was taken ill. He was rushed to hospital, but he is now recovering and we hope to see him commentate on the royal wedding this weekend.

After a brief pause, which allowed Morton a moment to retire, Mark Forsyth leapt into the breach, to give a talk on his book A Short History of Drunkenness. Mark outlined the traditions of ancient booze-ups: from the ritual inebriation – to the point of illness – of the devotees of the goddess Hathor in Egypt, to the Persian practice of sinking a few too many to determine the legitimacy of a war. He even explained how the animal kingdom got in on the fun. This was exemplified by the tale of the 150 Indian elephants who looted a distillery in the 1980s and subsequently laid waste to the surrounding area.

After Barry’s second – and equally brilliant – parrot joke, Bob Marshall-Andrews began his talk on his new novel, Dump. The idea for the book came to Bob in November 2016, when he was a guest at Mahale Lodge on Lake Tanganyika – one of the finest places  in the world to study chimpanzees. The story revolves around a rather similar lodge and focuses on the clash between its eclectic array of guests – including a couple of academics, a gun-toting American dentist and some donkey-mad British spinsters – and a rogue troop of chimpanzees led by the eponymous antagonist Dump. However, like all good satires, it has a serious side; it examines the predictability and ephemerality of tyranny.

Our publisher, James Pembroke, after a few words explaining, to some seemingly confused readers, that he was not the editor – had not put on weight and had always had ‘this hair' – thanked Noble Caledonia, as we all must, for its continued sponsorship, without which we could not put on our great lunches at such reasonable prices.