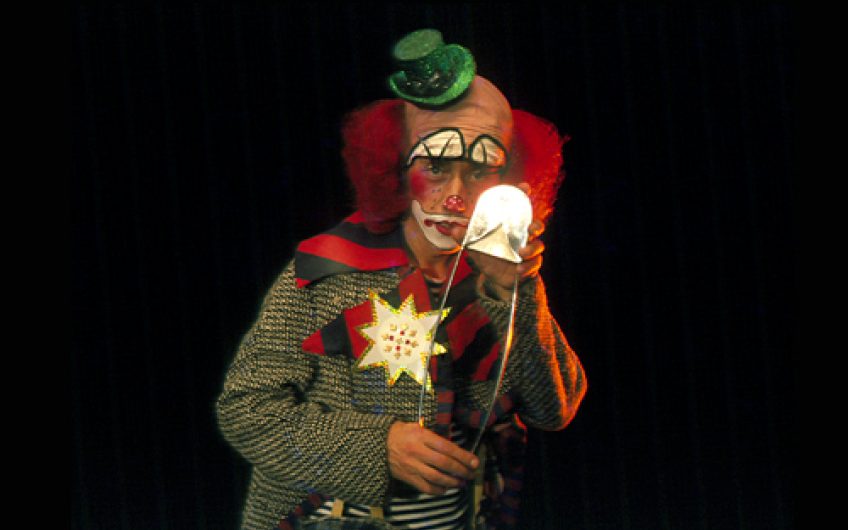 University College London Summer Ball, 1977 – the Cambridge Footlights were booked to do a midnight cabaret.

We came from Cambridge dressed for a ball in black tie, finding the UCL students all in jeans. Off came the ties. Then we saw the poster.

I wish I’d kept one. It read: ‘THE FABULOUS POODLES, THE CAMBRIDGE FOOTLIGHTS and THE JAM’.

The Poodles, a rock band fronted by Ronnie Golden, were late – so we went on at 2am, the advertised time for the appearance of the Jam. Imagine the fans’ disappointment when, instead of Weller, Foxton and Buckler, on to the stage came … us. We lasted five minutes, got howled off – pelted off. One of our gang, Jimmy Mulville, took them on. ‘Look, if you don’t stop f***ing throwing stuff, we’ll f***ing –’ He never finished the sentence.

Dying on stage is a hazard for any performer but, for Griff Rhys Jones, high art gives a measure of cowardly protection: ‘If you’re a low entertainer – low comedy – you go lower when you die. If you’re a high comedian with some intelligent subtext, if nobody laughs, you can walk off and say, “Well, at least the intelligent subtext worked.” But if you’re going on just to loon about and then nobody laughs … if you thought you started low, you have no idea how low you absolutely sink.’

Barry Cryer, The Oldie’s very own King of Comedy and master comedian at its literary lunches, began his career at Soho’s Windmill Theatre: ‘I was bottom of the bill. Bruce Forsyth was top. The audience hadn’t come to see comedy; they’d come to see the nudes. I’d do my 12-minute act six times a day; I’d go on stage and the men would open newspapers. You learned to die with dignity; you learned to work with silence. We’d joke about it backstage. “How many laughs did you get today?” “Three? Oh boy!”’

‘I died on my arse in Mumbai,’ said comedian Miles Jupp. ‘I was very unwell and doing a gig above a restaurant, getting little response. The rains started. There was just the sound of me talking and the rain hammering against the windows. I felt a long way from home.’

Jupp, a subtle and masterful manipulator of an audience, is an interesting case in how a performer copes with the pressure of going down the pan. He almost doesn’t understand the question when it’s put to him. Like many comedians, he seems to stand outside it and objectify it – almost enjoy it.

He can sense an air of inevitability when things go wrong during his stand-up: ‘You don’t really notice it happening and then there’s suddenly this atmosphere of treacle. I think, “Well, if it’s going to be like that, I’m pretty sure there’s nothing I can do about it.”’

That, surely, is the epitome of nerve.

Perhaps actors have it easy by comparison. Timothy Spall, who straddles so well both comedy and drama, recognises this: ‘You get people coming off stage, saying, “They’re not laughing but they are laughing internally; they’re trying not to laugh – we stunned them.”

‘No, no – if it’s a comedy and they’re not laughing, then it ain’t working. If you want an immediate example of failure, that’s it.’ Spall finds comedy more hazardous to play: ‘I find tragedy, and the more tragic and sadder the better, much more relaxing and less stressful.’

This is a running theme: Barry Cryer – ‘Comedy is the most naked part of our business’; Josie Lawrence – ‘It’s a much more serious business that the serious stuff’; Griff Rhys Jones – ‘You can feel mortally ashamed’.

Josie Lawrence doesn’t call herself a comedian, but she’s one of the funniest and most skilful performers in the country. In addition to acting, she’s part of the improvisation group the Comedy Store Players. Josie has faced rough houses: ‘Christmas gigs are the worst; there was one in the ’80s when the audience were given water pistols.’

To an outsider, she would appear bombproof, as if nothing fazed her. ‘It’s funny, because I’m not very confident in real life but, as I get older, I’m thinking, “Sod ’em.” If something goes wrong on stage, I just give myself a fearlessness. My brain clicks into “Now, what can we do?” There’s no embarrassment; the adrenalin kicks in. You go into a sort of zone – a dreamlike state.’

Miles Jupp in his early days put on a similar protective carapace when doing stand-up: ‘I imagined I was of a completely different physical type – it took the fear away from it.’ Nowadays, he says, the only way he changes character for a gig is by putting on a suit.

Performers have to find strategies to cope with failure, but for theatre producers it can be nightmarish when their show ‘gets the bird’. Sir Michael Codron, for the last 65 years one of the most influential impresarios in the West End, has fought many battles, not least with a self-appointed group of Gallery First Nighters who would choose in advance of the show whether to cheer or boo. Codron described them as ‘a fearsome group, mainly of elderly women and rather waspish gay men, all of deeply conservative taste’.

Codron was standing outside the theatre before the opening of Ride a Cock Horse when one of this group came up to him and said, ‘Tonight we are booing’ – because an actress they liked hadn’t been cast in the show. ‘I had the Lord Chamberlain on the one hand and these people on the other, against progress – it was quite a constriction.’

Sir Michael’s friend Kenneth Williams told him that, at the press-night curtain call of Gentle Jack, he was standing next to Dame Edith Evans, who was basking in the applause – although Williams could hear rumblings from up in the gallery. ‘They’re cheering,’ said Evans triumphantly.

The American comedian Rita Rudner has for many years headlined a show in Las Vegas. She is married to one of my fellow casualties from the UCL Summer Ball, Martin Bergman. Her worst-ever gig was at Suffolk’s Latitude Festival.

‘I disobeyed one of my golden rules – never perform at a venue where there are sheep. I was in a muddy tent, after a comedian who’d done ten minutes about defecating into a bucket. As I began, the rock band in the next tent started to play at top volume. The 50 people in the mud with me were clearly wondering why I was there. So was I. I left.’

It strikes me from my discussions with performers that none of them takes disaster personally.

‘You need the skin of a rhino,’ says Rhys Jones. ‘The real secret to dying is to do it so much that you’ll just use it as a learning process. The language of performers is traditionally combative – “We murdered them; we slaughtered them” – which is understandable when you’re having to avoid the audience killing you.’

Miles Jupp, though, employs a surprisingly delicate metaphor for disaster: ‘When it goes really badly and then you do it again and it goes well, it’s like a palate-cleanser.’

Barry Cryer is less Epicurean when recalling tough gigs. ‘I never get depressed,’ says the great man. ‘I just keep going to see if I get better.’ And how.