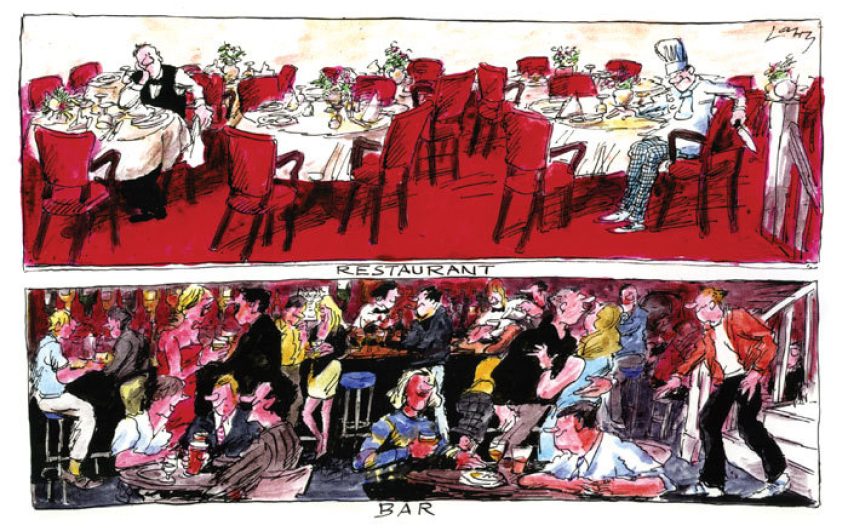 To anyone mad enough to think of opening a restaurant, my advice would be a definite ‘Don’t!’ However, if the urge is too strong to resist, here are a few tips. It’s true that I know little of the super-smart places that I can’t afford, or the super-trendy ones where I can’t get in. What I have done is to run (and cook in) three totally loony and eccentric restaurants – La Roma in Oxford, Etcetera in the Portobello Road and The Gasworks in Fulham – where I learnt a lot, most of it unpleasant.

Location, of course, is all-important, so copy the Chinese and call in a top-class feng shui expert. Let’s say you’ve picked something in the lower reaches of the Fulham Road. You are bang opposite the Brompton Cemetery, the undertakers and the Catholic Church, and next door to the Chinese Hospital. A feng shui disaster! You wouldn’t stand a chance. But, you protest, it’s near Stamford Bridge! How about all those hungry Chelsea fans queuing up for my goodies after a match? Sorry, no way! If they’ve won, they’ll go streaming down to the Chelsea Tup (aka The Sheepshaggers Arms) to celebrate by getting royally pissed, and if beaten, slink home despondently to raid the fridge.

So you decide to take a look at the other end of the road, mysteriously known as ‘the Beach’ and dedicated to the cult of ‘yoof’, as it used to be called. Unfortunately the young are not too interested in gourmet food and seem quite happy with an espresso and a fag, provided the music is loud enough. So what you can do is open a huge bar in the basement with even louder music and elastic closing hours. Soon it will be packed with regulars having a nightly rave-up – all the thrill of a club without having to pay membership, and you can sit happily upstairs in your empty restaurant, listening to the manic tinkling of the cash register below.

There are, of course, a few old-fashioned romantics, with visions of creating a cosy but profitable little haven – candlelight and Vivaldi, tables full of friends to chat to and rave reviews from Fay Maschler. As they probably don’t realise what a back-breaking grind it’s going to be, I’d like to give them some advice. First, premises: you’ve been told about rising damp and dry rot, but how about vermin? Before signing, spend a night in the kitchen, and if the darkness lights up with little red eyes and you hear the rustle of cockroaches, think again. Then look carefully into plumbing, as crossed connections can lead to the most unsavoury consequences. As, for example, the lady living underneath a Chinese restaurant whose bathroom overflow got confused with the kitchen sink, and who found herself relaxing in a bubble bath full of bean sprouts and bamboo shoots.

Make the kitchen as large as possible. I have dreadful memories of the four-foot-square sweat-box I once cooked in, where you could boil, bake, fry and grill while standing on one spot, waving your arms about like Toscanini conducting the 1812. Two fridges – one for fish – are always a good idea, so that the chef won’t have to waste valuable time picking frozen shrimps out of the lemon syllabub.

Talking of chefs, beware of primadonnas who think of themselves as some kind of minor royalty, terrorising the staff and running up ruinous bills for black truffles and foie gras. Try to keep the food as simple as possible. A customer who rashly orders chargrilled frogs’ legs couched on a souflette of pak choi and papaya with a sesame and lemon-grass dressing may feel his taste-buds briefly tingling, but after waiting for at least 45 minutes – all small-talk with his date exhausted – he’ll feel ready to kill for a short-order plateful of bangers and mash.

As regards staff, there are no hard-and-fast rules, but certain classes of person are best avoided, such as pregnant ladies, young men with mauve hair and diamanté dog-collars, or sullen-eyed blondes escorted by boyfriends in black leather and bicycle chains.

To keep the kitchen staff sober, avoid too many dishes like boeuf bourgignon and coq au vin, which give them unlimited access to the cooking plonk. Keep flambéed creations to a minimum, or one day you may see your chef crawling on all fours between the stove and the serving hatch, a platter of flaming bananas balanced on his head.

Train your waiters to be nice to everyone, except for rude, noisy drunks, and even smile at obvious no-nos, such as ageing hippies who bring their own chopsticks and carry their money in a matchbox. They should be particularly nice to pretty young girls on their own, anyone looking like a celeb or a food critic, men in Armani suits with designer stubble, old friends, lavish tippers and women in power suits and pashminas who like to smoke cigars and order their own wine. But one thing you must forbid them to do at all costs is to interrupt interesting conversations with that meaningless remark, ‘Everything all right?’

Another of my pet hates is red-hot plates served straight from the microwave. I have always believed that food tastes better the cooler it gets – probably a throwback to my school dorm days and the heady delights of cold baked beans eaten straight from the tin. I am also disgusted by the snobbery of certain grand restaurants who say it is non-U to give customers a side-plate. Where do you put those nasty little bits you don’t want to eat? How do you butter your bread? Ignore this ruling totally.

Of course you’ll expect to make money, but this is one thing I can’t advise you on, as none of my own projects were exactly goldmines. This was particularly true of La Roma, where the undergraduates saw no reason for paying, as all the waitresses were in love with them. These dishy girls, whose six-layered starched petticoats could skim the froth from a cappuccino at five paces, were each and every one dedicated to seeing that Jasper or Jonathan got his free goulash.

Meanwhile, up in my crazy kitchen, I cooked with the help of not one, but two epileptics: Momma, a lovely old lady from the marmalade factory, who kept a mattress under the kitchen table in case she had a turn, and Keith, a six-foot student with a broken nose, who wore a crash helmet in case of further accidents. My cooking was basic. Apart from a goulash, there was spag bol at 2/6d – the students’ favourite. Savoury pancakes were not so popular, as crafty customers knew too well the case history of these mini-dustbins. There was nearly always a skiffle group playing in the kitchen, while in the bar below the mighty Gaggia machine hissed and steamed, occasionally overflowing through the ceiling of Muriel’s Modes below, ruining yet another consignment of hideous May Week hats.

One great advantage of running a restaurant is that you are never lonely. The students loved the warmth of my kitchen and roosted like chickens among the potato sacks, their noses stuck into Nietzsche, while young rakes from the science labs with Coke bottles of home-brewed mescalin sticking out of their duffel-coat pockets wandered in and out of the kitchen hallucinating on my bolognese sauce.

Happy days indeed. I can only hope that others drawn to this nutty profession will have as much fun as I did – and even, dare I say it, make a profit?