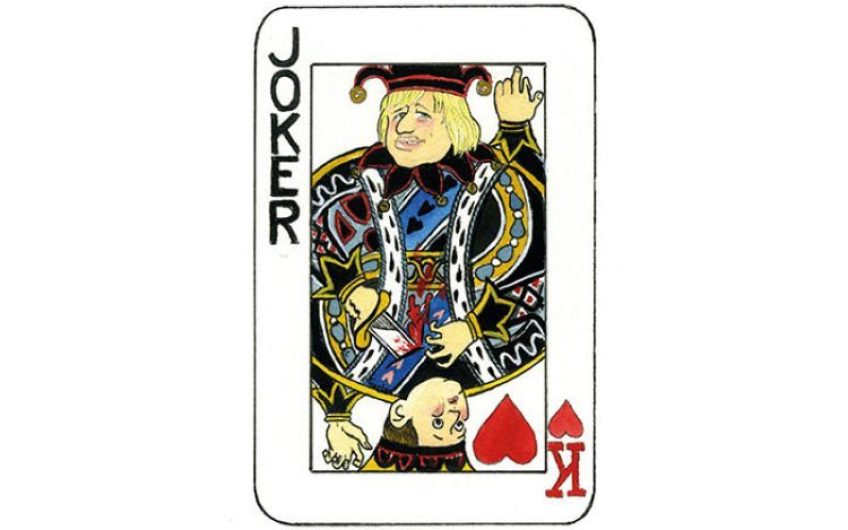 Fat, scruffy and brought low by wine, women and cake – the Prime Minister is just like Shakespeare’s tubby knight. By A N Wilson

Poins, when plotting the highway robbery at Gad’s Hill with Prince Hal, in Henry IV Part 1, concludes his recommendation with the line ‘The virtue of this jest will be the incomprehensible lies that this same fat rogue will tell us when we meet at supper.’

Queen Elizabeth I was only one of the many Shakespeare fans who clamoured for more Falstaff. Thus, when Mistress Quickly had described his demise in Henry V, The Merry Wives of Windsor had to revive the roistering fat knight, with a bedroom farce.

The drama of the Henry IV plays – which are surely the best things Shakespeare ever wrote – consists in the madcap young Prince Hal’s coming to political maturity and throwing off the company of the fat knight. It is a comedy with a quasi-tragic ending. Hal turns into a real monster when, having become King, he rejects his old friend:

‘I know thee not, old man. Fall to thy prayers.’ Falstaff is taken off to the Fleet prison by the Lord Chief Justice. Verdi brought out the tragedy of it all, in his rich late masterpiece.

Generations of theatregoers have delighted in Falstaff, and some Shakespeare scholars, such as Katherine Duncan-Jones, believe that Shakespeare himself took the role. The character combines such a range of the lovable and the hateful. He is ruthless, grasping, greedy for political influence. Yet he is also hilarious and endearing.

The whole logic of the play would collapse, however, if the audience supposed the roles of Hal and Falstaff could or should be reversed.

It is a measure of what a strange nation we are that so many people at the – so recent! – General Election voted for Falstaff to be our king, or ‘world king’ as his sister Rachel told us all had been Boris’s ultimate ambition since childhood. Though his girlfriends and wives might have considered themselves a cut above Doll Tearsheet and Mistress Quickly, no member of the public, however sheltered they might have been from newspapers and broadcasting, could have been ignorant of his reputation. To think that Cecil Parkinson, Margaret Thatcher’s favourite to succeed her, had his career ruined by fathering a child out of wedlock. How times had changed!

One of the keys to Falstaff’s success in life is his capacity to make his friends and fans love him, not in spite of but with his faults. Likewise Boris. Whereas Matt Hancock, caught snogging in the office, had to go, Boris in comparable circumstances would be seen as just dear old Boris.

The reason that Mistress Quickly’s account of Falstaff’s death is so moving is her preparedness to overlook all the obvious faults. His disreputable friends suggest that he was crying out of [about] sack on his deathbed, which she concedes. But when Bardolph says, ‘And of women,’ she hotly contests it.

Operagoers and playgoers could all see what was happening during Brexit. They were entertained into half-enjoying ‘the incomprehensible lies this same fat rogue will tell us’. I do not believe any voter was so stupid as to believe that recouped subsidies from Europe would pay for a hundred, or was it a million, new hospitals.

They voted like audiences at Henry IV, who positively enjoy, or half-enjoy, Falstaff’s cynicism, his belief that honour is ‘a mere scutcheon’, that the human race ‘are generally fools and cowards’. When he is exposed as the most outright liar on the field of Shrewsbury, claiming to have killed Hotspur himself, he still has the barefaced cheek to lament, ‘Lord, lord, how this world is given to lying.’

Of course, in the well-ordered world in which Shakespeare and Elizabeth I wished to live, it was necessary to ‘banish plump Jack’. But the Boris drama revealed how things have changed. The Conservative Party was perfectly happy to cling to the sticking-out shirt-tails of their Falstaffian hero when he was providing them with the unlikeliest of parliamentary seats. (Stoke-on-Trent going Tory – ye gods! As a Stokey, I found this simply unimaginable.)

As someone who does not vote any more, but who loves the Henry IV plays, I felt I could see where the voters were coming from. They wanted to kick over the traces and so they were prepared to support a man who had, when Mayor of London, devoted over £11,000 to Doll Tearsheet, aka Jennifer Arcuri – a woman whom he claimed he scarcely knew, but who apparently deserved large dollops of other people’s money.

Any other politician caught up in such doings would have been finished, but he went on to get a parliamentary majority of more than 80 seats.

Then, however, recovering himself from COVID, the hilarious, clubbable Falstaff, who enjoyed potations with the tavern-goers of Cheapside, demonstrated his amiable self. He raised a glass of wine in the garden with some exhausted civil servants and, horror of horrors, consumed a bit of cake in the Cabinet Rooms. How the Puritans gasped, and ‘Crucify’ was all their breath.

It seems in the end that ours has been a less elevating drama than Shakespeare’s, and certainly a less amusing one.