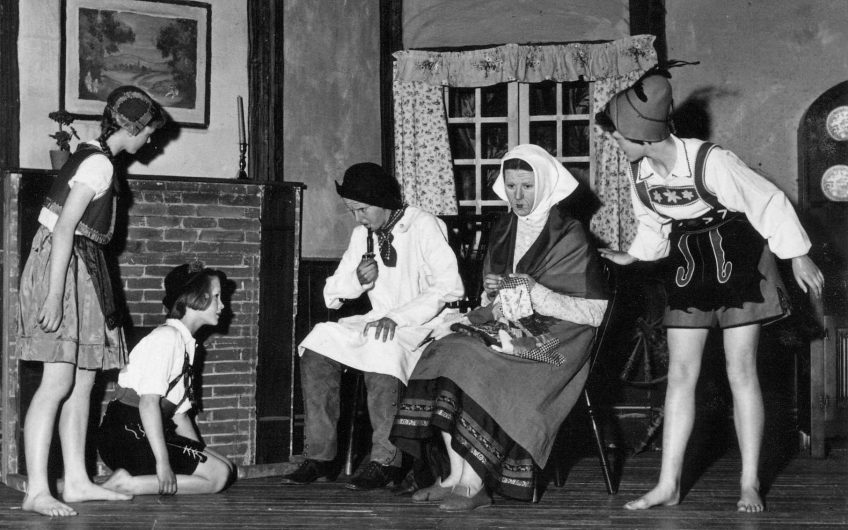 Lindy Dufferin as the Old Lady in a headscarf. Elisabeth Luard, far right, as the Boy with the Wand of Youth, in Edward Elgar's Wand of Youth, Lawnside School, 1956
View Full Size
1
of 1

I last caught up with Lindy Guinness - artist, yoghurt entrepreneur and the Marchioness of Dufferin and Ava - when she hosted The Oldie Summer Party in 2019. in tandem with the opening of her latest exhibition of Irish landscapes (mostly with cows, 'the ladies', generous providers of raw material for her highly successful yoghurt business).

My old schoolfriend - the same age as me - has just departed this life, aged 79, in Belfast, near Clandeboye, her Northern Ireland home which she inherited from her late husband, Sheridan Dufferin. The school was Lawnside - boarding, girls-only – in the bleak Malvern Hills. Both of us were a bit foreign in fifties Britain, even though Lawnside served as last ditch for those who'd blotted their copybooks at other schools. We'd both travelled abroad and might even have been able to speak a language other than our own.

We were taught English (Shakespeare, Jane Austen), Latin (Virgil, no Catullus - far too sexy), the history of Empire and mathematics up to a point where we might be able tackle the household accounts. No science – perish the thought. Throughout my schooldays, I never admitted to fluency in Spanish and French - the result of a diplomatic step-father - or to spending holidays abroad. It was probably worse for Lindy, as one or other of her parents was always in the tabloids, and word got around.

The main school excitement - a scandal that even made the London papers - in the four years we were incarcerated was an unexplained decision that we were not permitted to fraternise with other years or take walks on the Malvern Hills in pairs. Three was company; two was not. Word went round that the edict had something to do with the English mistress, Miss Dillon Weston (later cited as an inspirational teacher by novelist Angela Huth) and the sudden departure of a sixth-former known to have attended Miss DW's coffee evenings in the attic.

Miss DW wore a hairy tweed suit and socks with brogues. Only Miss DW's special pupils were invited to the attic. Lindy was. I was not. On the other hand, Lindy and I were both special favourites of Lady Aske, the art-mistress, a war-widow obliged to teach for a living (as she would explain to us sadly), a gentle soul who encouraged both her star pupils, Lindy and me, to work on very expensive watercolour paper that she bought for us herself. I found this a terrible responsibility - maybe Lindy did too; maybe neither of us ever lost that feeling of 'what if I make a mess?' that accompanies every new sheet of paper pinned to the board.

Certainly, when we walked round her exhibition together at the Summer Party, Lindy seemed as anxious and uncertain of her talent as when we were schoolgirls all those years ago. She loved acting, as did I. We were on stage together for a performance of Edward Elgar's The Wand of Youth, a combination of speaking and dancing that suited some of us better than others. Lindy played the Old Lady, an important speaking part, while I starred as the Boy with the Wand of Youth. Neither of our mothers showed up for the event, though we both featured in Tatler. Parental approval was never granted, even when earned. Lindy's mother, it seemed to me even at the time, was as careless of her daughter's happiness as was mine.

In later years, our paths crossed infrequently, but we were always glad to see each other at events such as an anniversary gathering of debutantes who came out in the same year ('59, since you ask). Neither of us were successful in the main purpose of our year as a deb - attracting a proposal of marriage to a suitable young man of whom our families approved. Preferably an English duke in need of a dowry to repair the roof.

Thereafter our lives took very different paths. I had married satirist-about-Soho Nicholas Luard, engaged in subversive anti-Establishment activities including proprietorship of Private Eye at the time when the paper was sued for libel by Randolf Churchill. The following year, 1964, Lindy glided down the aisle in Westminster Abbey with Sheridan Dufferin, possessor of a title, estate and fortune, already a well-known art-connoisseur who'd just started a London gallery with his friend and fellow party-animal John Kasmin. As an eccentric and generous hostess, she divided a glamorous life between her husband's ancestral home in Northern Ireland and a splendid mansion in Holland Park.

Our husbands met just once, as I remember, at a dinner party in Chester Square thrown by glamorous political hostess Pamela Egremont, and hated each other at first sight. Exchanges became so heated (no, I can't remember what it was all about) that Nicholas, rather grandly, invited Lindy to take her husband home.

We grew up together. Our mothers were girlhood friends, which meant I often spend weekends when my diplomatic family was elsewhere, at Lindy's mother's second husband's country estate in Rutland. Lindy's mother, as mine, was a spoilt beauty - born Isabel Manners, she grew up a daughter of Belvoir Castle - and our mothers met during the pre-war London Season.

Lindy's father, playboy financier Loel Guinness, based in Florida, was the subject of many a late-night, tearful discussion when Lindy felt she'd failed to live up to the intelligence of her brothers or the beauty of her stepmother, Gloria. Matching tears came from my own realisation that my mother, equally rich and spoilt and able to choose who and what she wanted, had lost interest in the two children of a wartime marriage she'd rather forget.

On one of these weekend respites from school, Lindy's stepfather, Bobby Throckmorton, chased me round the box-hedges (I was just fourteen) in an attempt at seduction. I never complained or told a grownup, but Lindy and I discussed the event enthusiastically and thought it rather funny.

Rest in peace, old friend. I'll miss you at the next (and possibly last) gathering of the debutante class of '59.