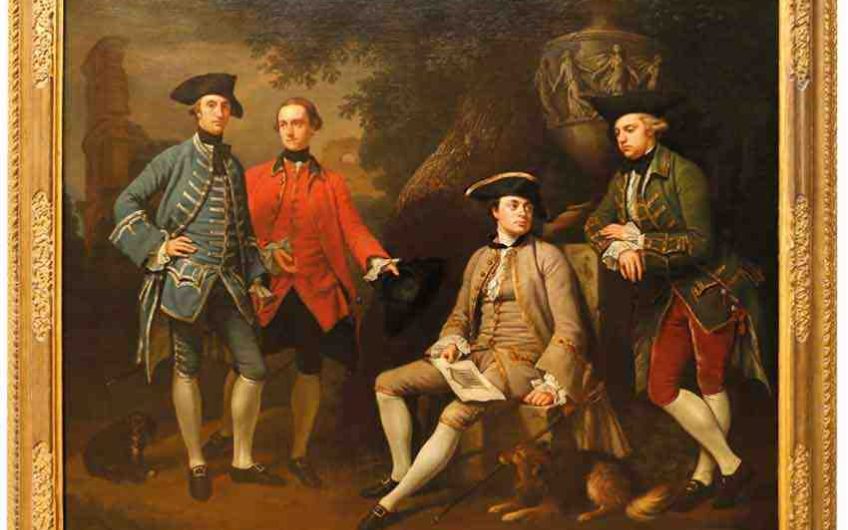 Fingers crossed, we might be able to go abroad this summer. It’s a good time to contemplate earlier eager travellers.

And what could be more British than the Grand Tour? Wealthy, often titled, Brits, accompanied by someone who knows what they’re talking about and enough luggage to hobble a mule, visit beautiful, foreign places. They admire their ancient monuments and fine art, while ignoring the political corruption and social deprivation that form the backdrop to all that sun-dappled elegance.

The Grand Tour is, on this view, the British superiority complex on an away day, dealing with the natives by copying or hoovering up their art and failing to learn their languages.

Then again, what could be less British than the Grand Tour? If the British caricature abroad is of an ignoramus, posh or plebeian, the Grand Tourist’s thirst for knowledge contradicts it. Still, as Blackadder says of Byron, ‘Mrs Miggins, there is nothing intellectual about wandering round Italy in a big shirt trying to get laid.’

Although Italy was the locus classicus of the Grand Tour, it was not the only destination. You had to go through France to get there, of course. On the return journey, many travellers took in Germany, Holland and Flanders.

During the Napoleonic Wars, and at other times of continental crisis, much of this route was closed to English travellers, which gave rise to the British love affair with Greece, and in architecture to the late-18th-century Greek Revival.

But, at the Grand Tour’s inception, most roads led to Rome. The archive of 18th-century British and Irish travellers to Italy, compiled by the connoisseur- scholar Sir Brinsley Ford (1908-99) – not to be confused with the founder member of the reggae band Aswad, Brinsley Forde – and made into a dictionary by John Ingamells, lists more than 5,000 visitors.

Ford’s work has provided more than one group of scholars with a living. At Yale, the Paul Mellon Centre holds the 56 boxes of the original archive. Over on the west coast, at Stanford, the Grand Tour Project, with a staff of eight, is engaged in digitising the same material, discovering unsuspected connections and clusters in the mass of individual stories.

It is unclear when the idea of the Grand Tour, its preferred route or even its name was fixed. But, by 1670, when Richard Lassels published The Voyage of Italy, this veteran of five such journeys could write of ‘the Grand Tour of France, and the Giro of Italy’ as familiar terms. To Lassels and his charges, travel didn’t just broaden the mind. It also taught humility – ‘Travelling takes my young nobleman four notches lower’ – and prepared him for a life of military or diplomatic service.

Lassels also gives the lie to those who assume that the Englishman abroad was stubbornly monolingual. On the contrary: ‘Travelling takes off ... that Aboriginal curse ... I mean, the confusion of languages ... by making us learn many languages, and converse freely with people of other countries.’

What did they bring back? Lassels’s vision of rounded polyglot leaders of men was mostly wishful thinking. But there was certainly one discipline that was changed utterly by its encounter with foreign models: architecture.

Christopher Wren never made it to Italy, but he steeped himself in Italian architectural models. When he made it to Paris, he had the good fortune to meet the Italian Baroque architect Gian Lorenzo Bernini, in 1665 – a year before the Great Fire of London gave Wren his opportunity to remake St Paul’s and the City churches in his version of Italianate Baroque.

The other thing Brits returned home with from their Grand Tours was stuff: paintings by Italian and French masters, statues and sculptures old and new, to fill their Palladian and neoclassical houses.

They also brought back the masters themselves. Canaletto had made a successful business selling his views of Venice to Grand Tourists. In 1746, during one of those periods when hostilities made the Grand Tour difficult, he came to London and painted pictures of the capital and rural England. Another Venetian, Giovanni Pellegrini, painted murals at Kimbolton Castle for his patron the Earl of Manchester and for the Howards at Castle Howard. Pellegrini’s influence on British artistic taste was increased by his appointment as director of the portrait painter Godfrey Kneller’s academy in London.

If our own Grand Tour is further held up by today’s war on COVID, we can console ourselves with an immersion in the fruits of our predecessors’ travels.

Richard Lassels sagely advised each of his young men, ‘First to take a view of England before he enter into foreign countries... Having thus seen his own country in a summer’s space, and having got His Majesty’s licence to travel beyond the seas ... I would have him depart England about the beginning of October.’

Not sure if I can wait that long.