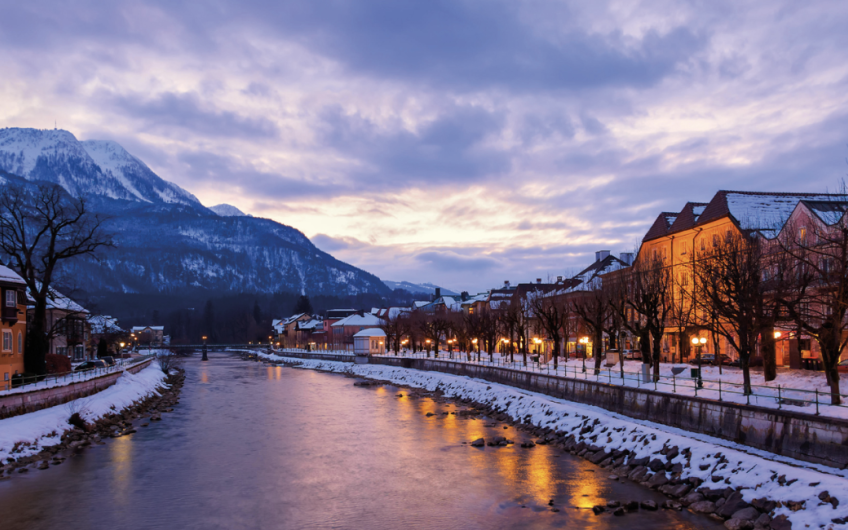 I love the snow and the ice and the blue cold. To fulfil these needs, I briefly owned a hut in the Canadian Rockies built by a Red Indian. As a weekend retreat – I lived in Herefordshire – this proved impractical. So I had everything (a Saskatchewan bar piano, my bear-trapper’s hat, a signed photograph of John Candy) shipped at ruinous expense to the Austrian spa town of Bad Ischl.

It is situated about an hour away from Salzburg in what is called the Salzkammergut district – a beautiful realm of lakes and mountains, on view in the opening aerial shots of The Sound of Music. Captain Von Trapp and Maria were married in the church at Mondsee, which is up the road from Bad Ischl. On a more cultural note, Mozart’s mother came from St Gilgen, which is on the bus route to Bad Ischl.

For fifteen years, I’ve been spending my winters there, in a small flat above a dirndl shop. Upper Austria is still so gorgeously old-fashioned and generally unspoilt, the locals wear their national costume as a matter of course – the skirts with the tight waist, emphasising the bust, for the women; the men in those leather shorts and hats with the shaving-brush plume. I myself stroll about in well-cut jackets with deer-horn buttons, and I have by now acquired a fine collection of bottle-green loden overcoats. Austria is still a formal nation – I get greeted, without any irony I’ve managed to detect, as Herr Doktor or Herr Professor. I come back to England and to the checkout persons at the Co-op I’m mate or buddy.

It is the ideal Christmas destination, with hundreds of decorated small trees outside on the pavements – imagine the fate of those glass baubles in England. Everywhere is candlelit. There are wooden stalls selling punch and gingerbread, and large ice rinks by the Trinkehalle.

Men dressed in Krampus (devil) costumes pretend to chase the children and tell them St Nicholas will not be bringing gifts if they have been naughty. Oompah bands are on each corner. Horse-drawn sleighs whizz past.

There seems to be no nonsense about animal rights, as my neighbours in the apartment block are tiny widows wrapped in furs. They dote on their ghastly lapdogs and snap at their dour, silent maids or ‘carers’. I received a hell of a bollocking once when, not realising that in Austria everyone was in bed by eight o’clock, I started thumping on my piano and singing Christmas carols while wearing my bear-trapper’s hat.

I quickly calmed down after that, and bought potted plants for everyone by way of appeasement. Now I am sure I blend in, pottering around the marketplace each morning for my bread and fish, sitting in the cafés reading broadsheet newspapers, sipping a noonday peach schnapps or a glass of Blaufränkisch, the red wine.

Newspapers, by the way, are printed in a Gothic typeface and are available to café patrons on these long sticks. Should Freud or Schnitzler walk in and get out their pince-nez spectacles, they’d be right at home.

I have always wanted to live in the past, and Bad Ischl fits that bill. Franz Lehár and Oscar Straus had villas here, and the operetta world persists.

The three turn-of-the-century cafés are lovely: Konditorei Zauner, with its glass cabinets crammed with pastries and chocolate, the marble tables laid with immaculate damask cloths and napkins; the Ramsauer, a favourite of Brahms, who also lived in Bad Ischl, has a parquet floor and red velvet banquettes; and the Sissy has golden pillars and chandeliers, a sweeping staircase and views over the river and snowy peaks.

There are heaps of other bars and restaurants, where the tone is courteous, charming, old-world. No self-service rubbish; no fast food. My sole complaint: everyone smokes heavily.

Nestled among the mountains, it is a place of water – crystal clear lakes, springs and streams. Bad Ischl began as a spa town with sanatoriums offering brine baths, thermal baths. It took off as a fashionable resort in the 19th century when the Emperor Franz Joseph and his wife, Elisabeth of Bavaria, constructed a summer palace – the Kaiservilla, with its Biedermeier furnishings and hunting trophies.

Franz Joseph spent every holiday here between 1848 and 1914 – and it was in Bad Ischl, after receiving news that his heir had been assassinated in Sarajevo, that he sent out the order to mobilise the army against Serbia, precipitating the First World War. The clocks in the town stopped at that moment.

To this day, in August, Bad Ischl celebrates Franz Joseph’s birthday, the Kaiserfest, with parades and fireworks. There is a service at the church where the organist was once Hector Berlioz, attended by the surviving Habsburgs.

Indeed, the citizens of Oberösterreich have blotted out any Nazi past by celebrating and promoting the Habsburg one – with the result that Bad Ischl is today a kind of Ruritania, as in The Prisoner of Zenda; a place of mustard-yellow castles and bright green meadows with wild flowers.

My burdens and anxieties vanish when I arrive. My spiritual temperature shoots up. I expand and soar and, without access to the internet or phones or letters or visitors, I do my real (non-hack) work in the town. If we all live to be a thousand, my study of comedy, Growing Up With Comedians, will be in the shops.

I have been living there long enough now, however, to observe changes, which I don’t much like. I suppose a younger generation, wanting to make their mark, treat period interiors or quaint buildings with carved wooden balconies like planners in England in the Sixties treated Victoriana – they knock them down.

There is getting to be too much that is bare and modern and ugly. There have been road-widening schemes. Cobbles have gone. Fountains have been replaced with terrible concrete and chrome plinths. The new bandstand is a wooden lump. It breaks my heart that anyone thinks that this is progress.

The other thing, aside from the architecture, is that, owing to global warming, there has been little snow these past few years; only a muggy damp, which reminds me of Wales. The cable car taking skiers to the top of the Katrin mountain has closed down.

Nevertheless, I love Bad Ischl so much that I have left instructions for my ashes to be scattered in the River Traun, which runs into the Danube. Enough remains – the churches with the onion domes, the traditional hat shops, the wrought-iron footbridges, the parks with music playing – to make Austria, to my mind, the perfect country, its society and culture in balance.