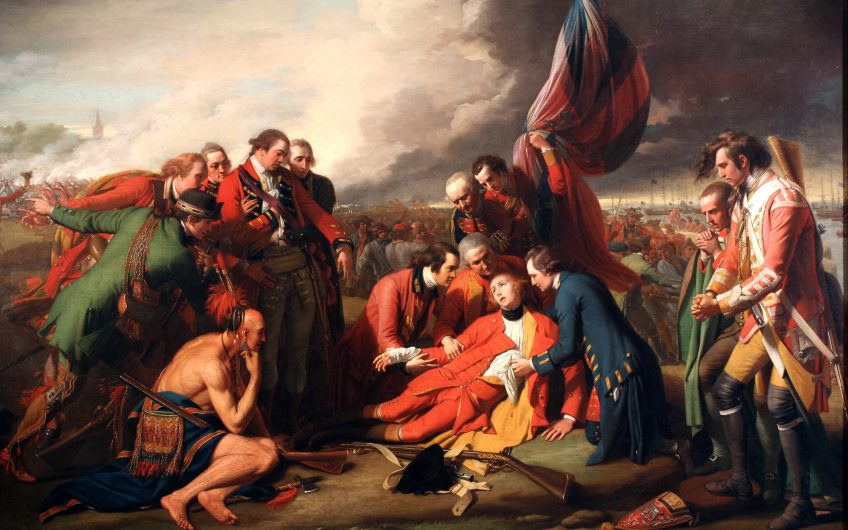 Before the days of Nelson and Wellington, mention the idea of the British hero, and one name would have sprung to many minds - General Wolfe, the man who died 260 years ago on September 13th, just after capturing Quebec from the French.

The fates were all in place for the creation of a new British icon. The Battle of Quebec was a crucial moment in the Seven Years' War and came after a tantalising three-month siege of the city. It marked the turning point in the campaign against the French in north America; within four years, practically all French possessions in the area were in British hands.

On September 13th, 1759, James Wolfe, at 32, was young, his instincts romantic - moments before the naval assault on the city began, he was heard on deck reciting, in a solemn half-whisper, Thomas Gray's Elegy Written in a Country Churchyard. "Gentlemen," he said to his fellow officers, "I would sooner have written that poem than take Quebec."

Just before he died his heroic death - shot first in the wrist, then the groin, before a bullet in the lungs finished him off - he groaned, "God be praised, I now die in peace." After his death, a few lines of Pope's translation of the Iliad were found in his pocket - "Brave let us fall, or honoured if we live."

He left behind him his heiress fiancée, Katherine Lowther, Lord Lonsdale's sister, and his recently widowed mother. As if all this wasn't poignant enough, Benjamin West, the leading Anglo-American painter of historical scenes of the time, secured Wolfe's place among the immortals 12 years later with his much-reproduced picture, The Death of General Wolfe.

Wolfe's illustrious life began on 2 January 1727 in Westerham, Kent, near the Surrey border, where Wolfe's father, a colonel in the Marines, had moved a year earlier. The Wolfes remained at Quebec House, then called Spiers, for 11 years, before moving to Greenwich. Not long after, at the age of 14, Wolfe, who had spent most of his school years at Westerham, was commissioned in his father's regiment of Marines. Much of the rest of his short life was spent on military campaign - at Dettingen in 1743, Culloden in 1745, and the Netherlands in 1747, before his career took off with the attack on Rochefort in 1757, soon after the beginning of the Seven Years' War.

This battle brought Wolfe special commendation from George II, who promoted him to full colonel, later remarking of him, "Mad is he? Then I hope he will bite some other of my generals." Wolfe's spell in Westerham may only have been a youthful one, then, but it was long enough to bed in the powerful associations with the man that fill the house to this day. It was also in Westerham that Wolfe formed his lifelong friendship with his childhood playmate, George Warde, of neighbouring Squerryes Court, a fine 1681 William and Mary house. Squerryes remains the Warde family home and, in its Wolfe Room, maintains much Wolfe memorabilia.

After the Wolfes' departure, the house went through several owners - including an incarnation in the 1880s as a boarding school - before it was bought in 1913 by Joseph Bowles Learmont of Montreal, who was keen to find a permanent memorial to Wolfe and his Canada connections. His widow presented the house to the National Trust in 1917 - one of the first historic buildings to be acquired by the Trust. Today, Quebec House is a mish-mash of rebuildings, most notably in the south entrance front, remodelled in the early 20th century, with three gables added to give it back its 17th-century look.

When the Wolfes lived here, it was a handsome, three-storey, gentleman's house, one of eight buildings in the prosperous market town which, in 1664, were rated as having more than eight hearths. Bounded to the north by the River Darenth, its grounds are not extensive, though a handsome 17th century coach house survives to the north of the house, its walls punctured with bee skeps - hives woven from straw.

Also on the north front, the windows give a fine view up the hill to the distinctive three eastern gables of St Mary's, Westerham, where a Burne-Jones window, brass plate and tablet all commemorate the local hero. Even as his star has faded more generally in recent decades, Wolfe still dominates the town of his birth. His statue, unveiled by Field Marshal Lord Roberts in 1911, dominates the village green, not far from the statue of another local hero, Winston Churchill, whose country house, Chartwell, is a short stroll from Westerham. A Wolfe Society banquet is still held in town on the anniversary of his birth, January 2nd, first hosted by George Warde in 1761 with 20 townsmen.

The bulk of the house today dates from around 1640, when the previous, irregular, early 16th-century house was enlarged by an unknown hand. It was given a basic symmetry with three of those gables on each side, all on a modern, rectangular, double-pile plan, a popular design in London's outer suburbs at the time. Parts of the Tudor house remain, such as an interior, mullioned, transomed window, blocked when the main staircase was added in the 17th century. Patches of the Tudor walls - greensand stone below, timber-framed above - can be seen on the east front, and there is speculation that Tudor walls form the basis of some of the internal 17th century walls.

Entering the south front beneath the attractively bulky hood of the Georgian doorway, you find yourself in the entrance hall, lined with early 17th century panelling; directly opposite is a 16th-century fireplace with a cast-iron fireback, inscribed with the French fleur-de-lis, borrowed from the flag of Quebec - the first of countless references in the house to Wolfe's final triumph in death.

This long, narrow hall features in Thackeray's The Virginians, as does Wolfe, who the writer described as having "little of the beautiful in his face. He was very lean and very pale; his hair was red, his nose and cheek-bones were high: but he had a fine courtesy towards his elders, a cordial greeting towards his friends, and an animation in conversation which caused those who heard him to forget, even to admire, his homely looks."

The panelling continues in the parlour, off the hall to the left. Above the fireplace, the early 17th century overmantel is inscribed with the mutilated arms of Henry VII.

Beyond lies the Bicentenary Room, the beating heart of the Wolfe shrine. Subdivided into four in the 19th century but retaining its original panelling, it was returned to its original state in 1959 - the bicentenary of Wolfe's death. The room is packed with further Wolfeiana - including his field canteen, a charming drawing of Wolfe by his ADC, Captain Hervey Smith and portraits of his parents. Most moving of all is the stylish, Nehru-collared, quilted linen dressing gown in which Wolfe's body was wrapped for his journey home from Canada to the Wolfe family vault in St Alphege, Greenwich. In 1772, Joseph Wilton's grandiose monument of a half-naked Wolfe, being crowned with a laurel wreath by Victory on the battlefield, was erected in Westminster Abbey.

The broad, 17th-century oak staircase, with fat Tuscan balusters, leads up to the deep, low-ceilinged drawing room, decorated with 17th and 18th century furniture. On the 1788 mahogany square piano, there stands a framed page of music, Britannia or the Death of Wolfe, written a decade after the Battle of Quebec by Thomas Paine, author of The Rights of Man.

"In a mouldering cave, where the wretched retreat,

She wept for her Wolfe, and exclaim'd against fate,

And gave herself up to despair."

Outside, on the first floor landing, a panel of toile de Jouy printed cotton, borrowing heavily from the West painting, shows quite how lucrative the late 18th-century souvenir business was. A set of 1761 engravings of a battered Quebec illustrate what a pounding the city took during the siege before its capture. The staircase continues up to the custodian's flat on the second floor.

Wolfe's spirit still haunts the town and the house, then. It is fortunate, too, that his celebrity has helped to conserve a remarkable minor gem of 17th century domestic architecture into the bargain.