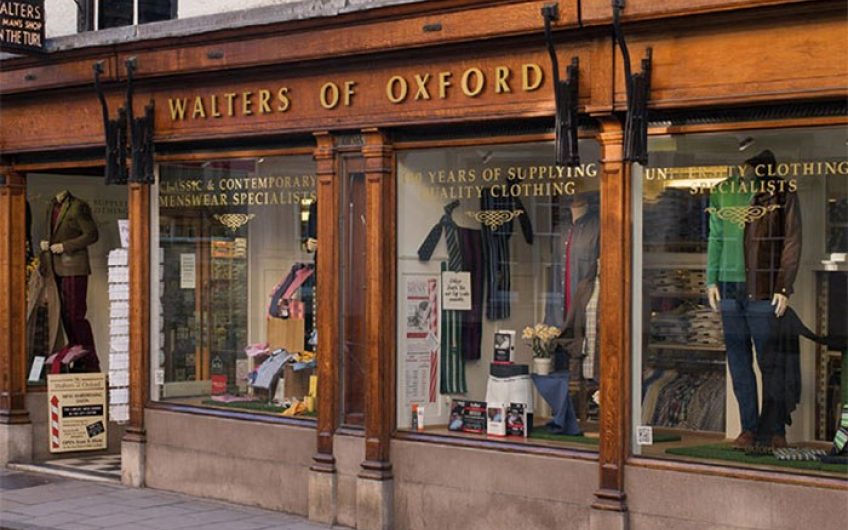 Mahogany counters, salesmen with tape measures round their necks ... Mark Palmer is kitted out by the last men’s outfitters

Every respectable town or city had a clutch of them. Today, the very term gentlemen’s outfitters sounds prehistoric – and wouldn’t find favour with sensitive gender-neutral types.

We had several in Reading, where I grew up in the 1950s and ’60s. There was one behind the huge Heelas department store (now a John Lewis), next to Chapstick, the sports shop.

My mother took me there to buy my first (and only) double-breasted blue jacket, with faux gold buttons. Tall and lean Roger Moore could carry off this sort of garment with aplomb but if you were short and fat, like me, you couldn’t.

‘Fits like a glove,’ said the dapper salesman, his tape measure slung nonchalantly around his neck – or words to that effect.

This struck me as odd because the jacket was singularly uncomfortable. Mind you, from my mother’s perspective it seemed ideal because it was off-the-peg and she thought it would last for years. Which it did. In fact, I still have it, lurking unloved somewhere in the back of the cupboard.

That particular gentlemen’s outfitters has long gone – and there are precious few of them left anywhere. The demise began in earnest in the late ’60s and early ’70s when postwar formality clashed with popular culture. Soon shops like Marks & Sparks joined the fray, and browsing became a new and enjoyable pastime – whereas you went to a gentlemen’s outfitters knowing exactly what you needed to buy and your outing was deemed a failure if you didn’t achieve it.

In the ’80s, ‘brand’ shops such as Gant and Benetton took more trade away – and wholesalers employing travelling salesmen, whom independent outfitters relied on, began going under.

Meanwhile, Burton and Debenhams, which just about could be labelled gentlemen’s outfitters, hit the buffers in 2020 under the stewardship of Sir Philip Green’s Arcadia Group. But they were nothing like that shop just off Broad Street in Reading.

Memory plays tricks, but in mine it had bow windows, mahogany and glass counters, wooden tie racks with metal clasps and parquet floors smelling of polish. Crucially, at any one time there were as many staff in the shop as customers. ‘May I help you?’ meant ‘May I help you?’

Some have survived. In Oxford, both Walters of Oxford (‘You will always be certain of the red-carpet treatment here’) and Shepherd & Woodward (‘Every detail can be guaranteed as correct’) have been trading for more than 150 years, but you wonder if they would still be around if the university weren’t there. Both rely heavily on the sale of academic gowns and robes.

The same can be said about Ede & Ravenscroft on London’s Chancery Lane, which, established in 1689, is thought to be the oldest tailor in the world; it specialises in ceremonial robes and dresses the judiciary.

Gentlemen’s outfitters are not the same as tailors offering a bespoke and pricey service, who may or may not ask, ‘And which way do you hang, sir?’ – but Oliver Brown on Lower Sloane Street manages to offer both off-the-peg and bespoke, plus something in between, whereby they will alter suits, jackets and trousers in such a way that the garments look as if they’ve been made to measure.

I was there recently to buy some trousers, to replace those that were part of a suit until the moths feasted on them over Christmas while I was languishing in bed with COVID. Before leaving, I spotted a blue wool suit up for grabs in the shop’s January sale.

It needed a fair bit of alteration after being pinned expertly by a man who had just moved over from Gieves & Hawkes following the Savile Row tailor’s going into administration.

He, too, had a tape measure slung over his shoulder, and when I folded the hem of one leg to the height I wanted, he said, sotto voce, ‘A mistake, sir. You need to go lower, if I may say so.’

Then he added that the £375 I was paying was some three times less than for anything I would have found at his old employers, but that the cloth was equally superior.

‘Walking into a proper gentlemen’s outfitters should be like arriving at a club,’ says Kristian Ferner Robson, Oliver Brown’s owner. ‘And the idea is that we will dress you from head to toe, but first we try to work out your wants and needs.’

Twenty-five years ago, Mr Ferner Robson worked two doors down at Buckleigh, which hires out dinner jackets and tailcoats. Oliver Brown, at the time, was primarily a women’s-wear shop – until it went bust and Mr Ferner Robson snapped it up ‘for a song’, as he puts it. He’s been pretty much singing all the way to the bank ever since, and has just opened a second store in Jermyn Street.

‘Competition is fierce in this neck of the woods and I get the impression that we’re not particularly welcome with some of our competitors. I can understand why. We sell shirts for £85 rather than £120 but ours, made in England and Portugal, will last just as long as theirs.’

I have made one other gentlemen’s-outfitters discovery. Its offerings are cheap as chips – but you can almost smell the polished floors, even though Peter Christian, as it’s called, is strictly a mail-order company.

You may have seen their ads in the classified-ad section at the back of some national newspapers and various magazines that cater for a more mature audience – including this one.

Founder Nick Alderton, known to his friends and customers alike as Lord Trousers of Partridge Green (the West Sussex village where the firm is based) and his wife, Miranda, began the business in 2004. Both had the skills of pattern-cutting and manufacturing by using the last traditional British cloth mills in places such as Hebden Bridge in Yorkshire.

‘I could see that there was a hole in the market left by the disappearing of men’s outfitters, and I was determined to fill that gap with an online version,’ says His Lordship, 66. ‘Our catalogue is a little eccentric and is a reminder of some of the old boys who used to serve behind the counters.’

His moleskin trousers (£60, or two for £110) are described as ‘soft as a baby’s bottom and rakish as a guardsman’s smile’ and his silver-fox models look like normal people, albeit one of them sports a monocle in his left eye when showing off a Harris Tweed jacket.

‘Give us a tinkle,’ says the Peter Christian brochure. And when you do, a human being stationed in Partridge Green rather than Karachi answers immediately.

Mr Alderton may have known a lot about men’s clothing, but he knew nothing about running a digital business. Fortunately, his son, Maxwell, is a techie whiz and has expanded the business to the United States with considerable success.

Speaking of which, Brooks Brothers (founded in Manhattan in 1818) sadly has become a threadbare business, which filed for bankruptcy during the pandemic. Its Madison Avenue flagship store in New York is still there, but it’s a quarter of the size it once was and can no longer be called a gentlemen’s outfitters.

I looked in at the New Year and hardly recognised the place. It had the whiff of cheap clothes about it, rather than the scent of traditional beeswax.