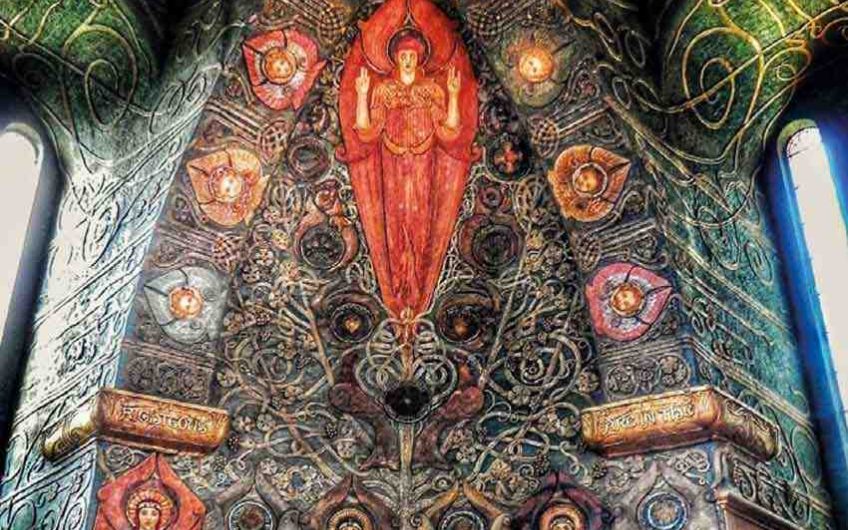 The Watts Cemetery Chapel in Surrey is a divine slice of Celtic, Romanesque and art nouveau, built by the inspired Mary Watts. By Lucinda Lambton

At Compton, just south of Guildford in Surrey, you are in for a shock – a rare and ravishing shock which, for its complex, decorative beauty, is surely unparalleled in the country.

Bewitchingly sombre yet vibrantly glowing, the Watts Cemetery Chapel, with its astonishing decorative schemes, has a heart-stopping-you-in-your-tracks sense of the extraordinary.

The chapel is whirled into a web of art-nouveau decoration that smothers the walls throughout in rich and often deep relief. It was conceived and designed by a woman who had never embarked on any such architectural schemes before and would never do so again.

She was Mary Watts, the painter, sculpture and designer wife of the great Victorian artist George Frederic Watts. Although he paid for it – painting a picture specially to finance the work – he played no part in its creation.

Always a keen philanthropist, she had started her artistic life by giving clay-modelling classes to shoe-blacks in London’s East End and thereafter would immerse herself in teaching craft skills for the greater good.

She established evening classes in Compton, founding the Compton Potters’ Arts Guild and the Arts and Crafts Guild, with 74 local amateurs and enthusiasts from the village. They included the blacksmith, a local builder and an architect called George Redmayne, who supervised Mrs Watts supervising the labour force. The renowned Scots writer and sculptor Louis Deuchars advised overall.

Many locals went on to apply themselves to the fantastically elaborate decoration under her guidance, with almost every resident of the place being involved in one way or another.

Today, the village is still intact and the chapel is to be restored. Still, it’s so close to the A3 that it seems to have fallen off the dual carriageway, thundering by in close proximity.

Starting in 1896, the work was finished by 1901. The chapel ended up as a brilliant red-brick beacon of a building in most violent hues. Mrs Watts had hoped it would blend into the countryside. It most certainly does not, never will and is all the more glorious because of it.

There it stands, built in what was originally a picturesquely rural spot, a Greek cross standing proud, with the ground plan of a circle symbolising eternity and faith.

Dramatically engaging, every inch of its intricate, Celtic, art-nouveau and Romanesque decoration has a message from Mary Watts. The exterior, with friezes in deep relief, shows the spirits of love, hope, truth and light, with the tree of life rambling throughout.

The arches round the door give it all the appearance of a Norman doorway graced with a choir of angels – ear to ear, their wings entwined by a Celtic cord pierced through with peacocks’ eyes.

Step through the door and you are enfolded by the glow of rich, dark colours and by endlessly interweaving lines, woven, according to Mrs Watts, ‘as it were, into a mystical garment’.

The roots of the tree of life writhe again, beneath the sombrely beautiful ‘winged messengers’ – great, feathered giantesses ‘presenting the light and the dark side of things’.

Those of the light have their haunting faces gazing out and those of the dark have their backs turned: Night and Day, Growth and Decay, Ebb and Flow and Joy and Sorrow, they stand two by two around the walls, all grasping a sharply raised Celtic Nouveau cord, entwined with symbolic cameos. This marvellous assembly is made of gesso – fibre soaked in plaster of Paris, fashioned into panels at Limnerslease, the Wattses’ house nearby (also under restoration).

A delightful-to-relate error is that the staircase from the first to the second floor was entirely forgotten. It was a major slip-up on the part of the artist and architect Sir Ernest George, whose London office was nicknamed the Eton for Architects and who counted Edwin Lutyens among his pupils.

As for the marvels painted in the house, the panels were attached to a metal framework. The panels were then fixed to the chapel walls, before being enriched ever more luxuriously for their final splendour.

A gilded message, reading ‘Their hope is full of immortality but the souls of the righteous are in the hands of God’, sweeps round the room, supporting thick vaulted ribs to the ceiling. These are embellished with strangely modern – I fear somewhat cutesy-faced – cherubs, which soar past crimson-clad seraphs to meet ‘the circle of the eternal’ in the apex on high.

Despite living only half a mile away, Watts saw his wife’s tour de force only once – and then by chance, when he followed her out for a walk. She wrote, ‘He had not before realised what I had aspired to in the matter of this glorified wallpaper and spoke with his usual generous appreciation.’

These sinuous architectural forms, to become known as the art-nouveau style, writhed their way through Europe at the turn of the 20th century, although their tendrils barely touched Britain’s shores.

It is thanks to Mrs Watts and, I fear, precious few others that we can delight in their riotous twists and turns. Three cheers for this supreme example in rural Surrey.

The last words should go to Mary Watts. She was determined that the chapel should ‘be an example of what God’s Acre might be’.