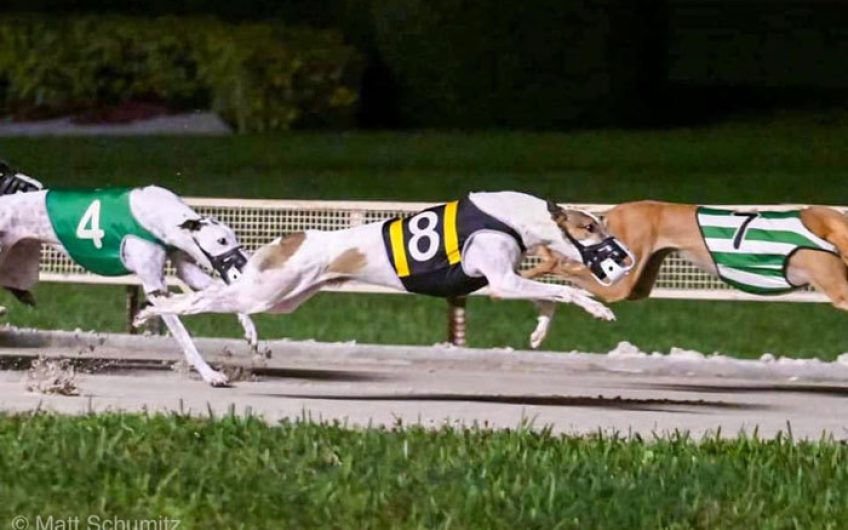 This shows a racing Greyhound in the extended phase of gallop when legs are off the ground and fully extended. Credit: Matt Schumitz (CC BY-SA 4.0)
View Full Size
1
of 1

Six sleek dogs stand quietly by their handlers in the dim light of a misty evening, watched by a small crowd of men holding pints of beer. The dogs trot calmly up the track to the metal trap and step in. It clangs opens as a fluorescent rag zooms past and whoom! the dogs bound out, as on springs. Their long, powerful legs and flexible spines take them to 40mph within six strides. As they hurtle around the corner, a blur of legs, one dog somersaults across the sand, rolls upright and resumes his hot pursuit of the pack.

I had put a bet on Millicent Magic, a bitch with a shiny black coat, running out of trap one. She had previously been beaten by Jet Stream Smurf and Boherduff Solas, and tonight she was running against Boom Boom Love and Smoothappa Razor. Just 420 metres and less than 30 seconds after they had started, there is a smattering of applause as the winner crosses the finishing line. The crowd turn to think about the next race. The handlers catch their dogs and walk them back to the kennels. Their work for the week is over.

Sadly my lovely Millie came last and I lost my pound. Was the trip to Swindon worth half a minute’s excitement? For thousands of people in Britain – the trainers, owners, bookmakers, kennel hands and punters – it is their world, their way of life.

Greyhound racing was introduced from the United States to Manchester in 1926. Within a few weeks more than 10,000 spectators were attending each meeting at Belle Vue and only two years later there were 68 tracks around England. Working men had raced dogs for centuries, and this offered a night out with a bar and the promise of riches.

During the post-war boom, 50,000 people regularly attended White City stadium. One of them was East Ender Alan ‘Ginger’ Newman, now 74, who as a tic-tac signer and bookmaker knew all the 33 London dog tracks. ‘White City, Hackney Wick, Wimbledon, Wembley,’ he says. ‘Back then you could only bet legally on the track, and I knew all the bookies: “Fatty” Sparks, Obie “The Chalk” Dyer, Big Bertie Pearson, Harry “Errol Flynn” Saffron and Judah Moss. You’d always know when Judah and his brother had lost. They would start screaming at each other. Then one of them would kick the other quite hard. The punters loved it.’

‘Jock the Thief’ was a regular at the Wimbledon track in the 1950s. ‘He always came with a big suitcase,’ Newman recalls. ‘It was stuffed with razors, shirts, silk ties, ladies’ stockings, scarves, perfume – things that were difficult to get. He sold them out of his suitcase at knock-down prices but nobody asked questions. By the time the races started he had sold the lot. He then proceeded to lose it all on the dogs. Next week he was back, with another suitcase full.’

When high street betting shops were legalised in 1961, dog track attendances declined. So managers attracted new clientele by opening restaurants up in the stands. Roger Moore was starring in The Saint when he took Bette Davis to White City. ‘She loved it,’ he wrote. ‘The idea of being able to dine, place bets and watch races every fifteen minutes from our table was like manna from heaven to Bette. Everybody was so preoccupied with looking at their racing forms, eating and placing bets that they never paid much attention to us.’

‘Dogs don’t need much training,’ Gilly Hepden, who races her dogs at Swindon tells me. ‘You breed them, feed them, groom them, love them and then say “Go!”’ The dogs walk daily on a lead, and run 350 metres once a week.

‘They don’t need stamina, they need explosive energy,’ adds Daryl Porter, who has been a trainer for fifty years. His dogs eat cornflakes for breakfast, beef and tripe for lunch and root vegetable soup for supper. ‘They know when it’s race day. As soon as they get a racing breakfast, they start to get excited. They may look calm standing on the track ready to race, but their hearts are pounding away. A dog won’t race unless it wants to, they just do it because they love it.’

Individual dogs are remarkably consistent in their form, and eyebrows are raised if one runs even a third of a second off its normal speed. They are rated in categories from one to ten and the six dogs in each race are matched as evenly as possible. So, unlike horses, there is little possibility of a surprise outsider. The owner keeps the prize money, which ranges from £35 to £200,000 for the William Hill Derby at Wimbledon. A Derby winner can then earn £1,000 a pop in stud fees, so there is a gamble in ownership, too.

In the days before the Animal Welfare Act the dogs were often viewed simply as commodities, or running machines on which to bet, and the business had a reputation for cruelty. Now all the tracks employ qualified vets who inspect each greyhound before a race.

A dog’s racing career begins at sixteen months and usually ends at about six years. Retired greyhounds make great pets for oldies as they need only a short walk and sleep most of the day. ‘They are lovable, calm couch potatoes,’ says Steve Simmon. ‘Easy-going and good with children.’ The Retired Greyhound Trust re-homes nearly 4,000 dogs a year, funded by a levy from bookmakers.

‘In the old days,’ says Hepden, ‘rich people raced horses and poor people raced dogs. Now dogs are owned by all types.’ Buying a greyhound costs anything from £500 up to £40,000 and then £50 a week to train. ‘You never make your money back, that isn’t the idea. People do it for the love of dogs, and the other people who love dogs.’

Only 25 tracks are open now – the land is worth more for housing. More than 8,000 people attended the last night of racing at Walthamstow in 2008. Oxford stadium closed in 2012. Swindon track probably wouldn’t survive without its indoor market and car-boot sale. Only Wimbledon remains in London and even it is under threat from developers. However, people in Britain still bet £2.3 billion a year on the dogs and owning a greyhound has become so cool even Jools Holland and Brad Pitt have one. And in December a new greyhound track will open in Northamptonshire.

Lord Hesketh, who owns Towcester racecourse. Like many tracks, it will provide ‘Bags’ – Bookmakers Afternoon Greyhound Service – which broadcasts live races to betting shops. Towcester will also ‘stream’ races to distant parts of the world. ‘Russia and the Far East are burgeoning markets,’ Hesketh tells me. ‘British greyhound racing is known the world over for its integrity. People trust that the races are fair and the welfare is good.’

‘This will be the Manchester United of greyhound racing,’ says Chris Page, Towcester’s racing manager. ‘I’ve picked the best team in the country,

including champion trainers Nick Savva and Mark Wallis.’ The almost-circular 420-metre track sits in front of the impressive grandstand set in landscaped grounds.

‘Greyhound racing is not stopped by rain, snow or fog, and we will be racing three days a week,’ says Hesketh. ‘You can watch your own dog every week.’ Entrance will be free, but punters can work their way up to higher levels of spending and prestige with private boxes on the top floor.

Personally, I’m looking forward to the opening night at Towcester dog track. I shall be going as Bette Davis and Mr Hampton will be my Roger Moore.

Greyhound Board of Great Britain lists all races: www.gbgb.org.uk