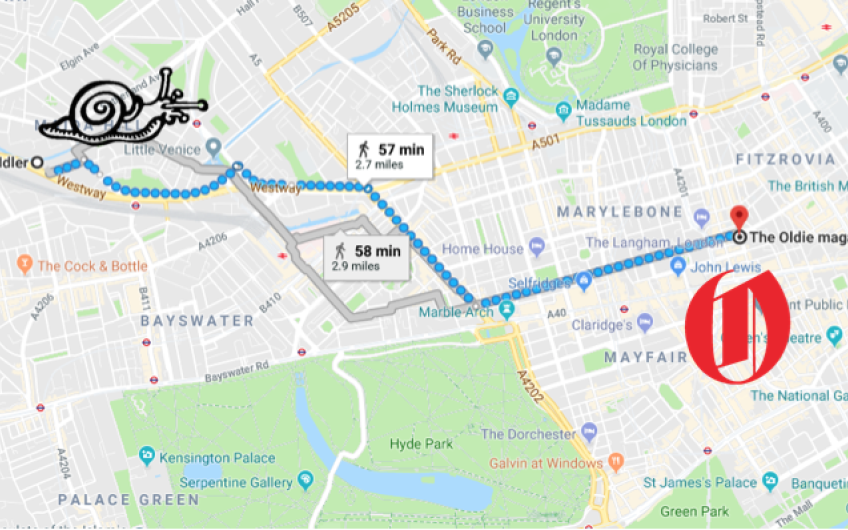 I’ve always found the world beyond my routes to and from work or regular haunts as indecipherable as Amazonian jungles. As I wrote those two words, my heartbeat trebled. I really hate getting lost. It sends me into a genuine panic. And I get lost a lot. I can never find the petrol station in motorway service stations and regularly lose my way to departure gates in airports. No amount of flourescent signage helps, but I used to manage, thanks to the mercy of the Guides.

The Guides were those people who boasted of having a good sense of direction and talked about ‘dog-leg crossings’. Whatever they are. When you stopped and asked them for directions, they spoke at five hundred words a minute and couldn’t understand why you didn’t know their home town backwards, when it was only 200 miles from one’s own. They were excessively boring but as kindly and well intentioned as bell-ringers. I used to like to think they waited on street corners for me and the other lost folk. Now, I am certain I was right.

So, I always used to end up confirming that first sentence of fifty ‘so I turn right at these lights?’  I then turned right at the lights and found another wannabe Magellan. One of my first guides once saw me doing this and barged into the second guide’s much clearer directions. They started arguing, leaving me with the overriding temptation to shout ‘Fight, fight, fight’  through my car window. As usual, I had to find a third guide. Third guides were often the best. Why they didn’t jump the queue and ask for promotion is one of the existential mysteries, which filled the other 20 per cent of my driving thoughts.

This was back in the happy days before satnavs. Everyone used to have a satnav story: most were about unexpected rivers. The inevitability of the punchline could leave one screaming inside for the sort of merciful release for which Guy Fawkes prayed in the Tower of London. I now know that all those Vasco da Gama gangs of street guides knew their number was up, and were desperate to spread black propaganda about the usurping software, as blacksmiths must have done about the arrival of the motor car. God, I miss those Knights of the Lights. They were my saviours.

I cycle to and from work every day. Such is my internal autopilot, I realise I’m barely conscious most of the journey, as my fellow road users will confirm. This has created an unwarranted confidence in my innate navigational skills. So, when I confidently set of for a meeting off piste, I always get lost. The problem with getting lost on a bike is that you will have gone a mile in the wrong direction taking ten minutes, meaning you have wasted twenty minutes getting back to your start point. Walking is easier because you clock the street signs as you stroll by, but the cyclist has to rely on a knowledge of the metropolis worthy of a black cab. And we can’t read a map when at the lights.

Tired of turning up to meetings suffering from post-traumatic stress disorder, I decide to take my scoffing children’s advice of setting Google Maps before I go. Strangers to the drudgery of common sense, they assured my I would hear ‘Navvie’ screeching ‘fork left to Clerkenwell Road’. Of course, I never hear a thing. So, after seeing a sign announcing Kilburn was only half a mile away on a journey from Maida Vale to Soho, I then stopped and saw that Navvie had now mysteriously increased my journey of 25 minutes to 40 minutes. I tried to stay calm, despite this being the third such incident that week.

Sensing this, she flipped that white arrow back and forth on the blue route and barked three contradictory instructions at me. Holding my iPhone in one hand and the handlebar in the other, I then tried to follow her shining blue route; but whenever I did, Navvie screams ‘make a U-turn at the next opportunity’ and yet the next opportunity was the other side of Kilburn. So, then, I tried to find a Guide, but they’re extinct. All pedestrians now wear leave-me-alone earphones, which means I had to jam my bike in front of them, waving frantically and pleading. ‘I’m late for lunch. Please help me get to Lexington Street.’ And what do the bastards do? They resentfully take one earphone out and look up the way on bloody Google Maps.

On the way back from the last Idler dinner in Maida Vale, I swear I started crying. The 30-minute journey took me 90 minutes. Oh to be a crow and fly direct from A to B.

JAMES PEMBROKE, this was originally written for the Idler magazine www.idler.co.uk