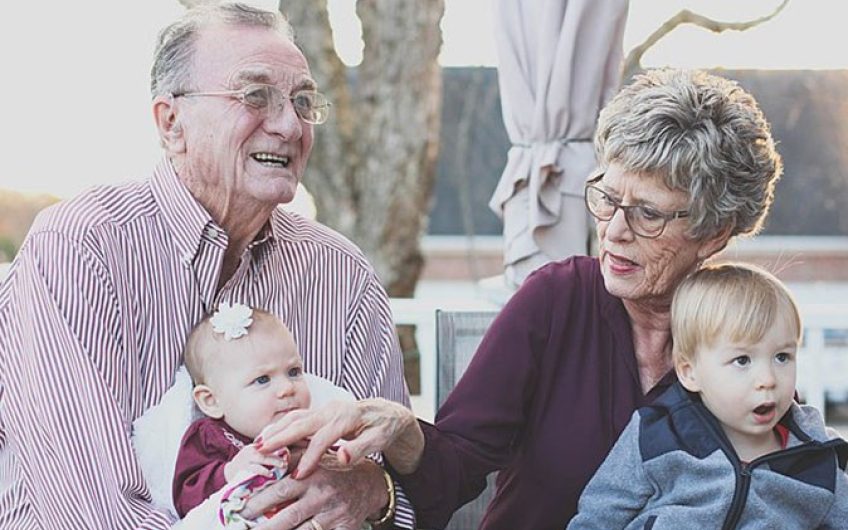 "Not only are grandparents not a burden, the British family and the economy at large could scarcely manage without them"
View Full Size
1
of 1

I was on my way to look up the academic research on grandparents at the Family Policy Studies Centre when I spotted a real grandfather on the Tube. He was a man in his early sixties in sole charge of a jumbo-sized toddler called Terry. His self-appointed role was to introduce Terry to the outside world.

Terry was about as alert as a child can be when he is wrapped in several layers of patchwork knitted blanket and when his grandfather won’t let him get a word in edgeways. Terry wore a white knitted bonnet and on top of the bonnet he wore his father’s tweed cap. His hands were tied up inside adult blue knitted gloves with loose, empty fingers. His face was round and rosy and his eyes were round and blank.

Terry only had to turn his vacant gaze in the direction of something noteworthy and his grandfather would introduce him to it.

‘Those are straps for hanging on in the rush hour, Terry,’ he said. And ‘Watch the doors, Terry. They’re to let the people in and out.’ At one point he groped under Terry’s push-chair and produced a tattered colouring book. ‘You wouldn't believe he could do all these drawings, would you?’ he said to all of us. ‘Look, Terry,’ he said, pointing at a drawing of a pig. ‘What’s that?’

‘His uncles taught him that,’ said his grandad proudly. ‘He can wreck a place, you know. You wouldn’t believe it but I’ve come in a room and he’s wrecked it. We haven’t had any sleep for 24 hours, have we Terry?’ Terry continued to stare vacantly into space.

According to the copious American research into grandparenting Terry’s grandad was a cross between two or three archetypes. He was a Fun Seeker, one of those grandparents who believe in romping around with the grandchild. He was definitely a Surrogate Parent. I had a sense of Terry’s mother and father and, indeed, uncles, lying exhausted in some wrecked house waiting for grandad to come to the rescue. And I’m sure he was a Reservoir of Family Wisdom, a patient source of all those gripping stories about when mum and dad were little.

As Terry and his grandfather, one impassive, the other still talking loudly and educationally, left the train at Edgware Road for a companionable walkabout, I mentally took my hat off to him. There was a man who was indispensable in his particular family, and a child who was sure of at least one solid male role-model in his life.

The more the traditional family disintegrates, the more tenuous becomes the role of the grandparents and yet the more desperately we need them. As fathers and mothers break up, the grandparents come into their own as the emotional anchors who give children their sense of roots, of stability, of family and of connection to the past. And yet grandparents in Britain are officially invisible — unresearched, unquantified, undervalued people.

We live in a society which persists, first, in identifying grandparents with the old and frail; secondly, in treating all these old people as an embarrassing and expensive problem. Grandparents are still portrayed in the media as doddery old things with white hair, when most people are likely to become grandparents in their early fifties, and to have had their last grandchild by the time they are 60.

Grandparents are seen as a source of strain in the family when the truth is that grandmothers are the single largest source of child-care for working mothers. When times are hard, when fathers are unemployed, it is grandparents who boost the family income by buying clothes or food and stumping up for school fees or holidays. Not only are grandparents not a burden, the British family and the economy at large could scarcely manage without them.

And their socio-economic usefulness is exceeded by their emotional importance. In America they know this. Large tomes with titles like ‘Grandparenthood’ are fascinating chronicles of the multiple roles which older people play in the lives of the young. Francis McGlone of the Family Policy Studies Centre suspects that Americans are better at this research because they are more ‘into’ relationships than we are. But the interest in relationships, and the research it has generated, has had hard-edged legal and political consequences.

Growing grandparent power has been responsible for the fact that 49 American states now have legislation which allows grandparents visitation rights in divorce cases. This legislation has come about because the break-up of the nuclear family has given grandparents more responsibility, because they are younger and more assertive than they used to be and because all this research literature provides a solid body of evidence that grandparents are a good and necessary thing.

In Britain grandparents have no rights in connection with their grandchildren at all. The loss of a parent usually means the loss of that parent’s parents too. And yet the loss of contact with grandparents is a very serious one. Their role in our lives is irreplaceable.

My 100-year-old grandmother held the family history in her head. She acted as a link both to our past and to a national past. She had the wisdom of long perspective which put bad exam results in their proper place. She was the one that we all visited, yea, down to the fourth generation, and so she was the only member of the family who knew what everyone was up to. She sat at the centre of the web which held us connected and with her passing we have had to begin to weave a new web. It works quite well but it has no centre anymore.

‘Children,’ says American researcher Arthur Komhaber, who interviewed a cross-section about their grandparents, ‘portrayed their grandparents in a variety of roles. They functioned as mentors, caretakers, mediators between child and parent, and family historians.’ Ironically, although the rate of marriage break-up is higher than ever, more children are getting the chance to know their grandparents than in previous generations simply because people live longer. According to the report Family Change and Social Policy, ‘although evidence is sparse, there must have been, in recent decades, an increase in the number of three- and four- generation families in Britain. This means that more children grow up in extended families with grandparents alive and often some great-grandparents.’

‘The four-generation family is a growing phenomenon,’ says Francis McGlone. ‘For example, my wife’s grandmother is 95 and she is looked after by her daughter-in-law who is in her sixties and is also looking after her grandchildren. People have focused on the increasing numbers of elderly people as though this is going to be a huge social disaster, but we overlook the fact that they are the major carers of their spouse and of their grandchildren.’

There is one kind of grandparent who is not quite so happy to be an indispensable part of the social fabric. The fit, active, aerobically exercised young granny is often not very interested in being a grandparent. It confuses her. It makes her feel old before her time. Even as her divorced children are part of a changing social structure she is part of what Kornhaber calls the New Social Order, the one which puts individuality and independence before family support and sharing.

‘Children,’ says Kornhaber, ‘raised under the new social contract are susceptible to identifying with media- learned stereotypes of old age. Thus they become scornful of the elderly and fear becoming old.’

But if we can break this cycle, we can break the stereotypes too. Teenagers, whom you might suspect to be the most suspicious of the old, value their relationships with their grandparents as companions and confidants. And grandparents who have a good relationship with their grandchildren simply get more of a kick out of life. Studies show that being an actively involved grandparent greatly helps to raise morale and improve mental health.

But nothing can be taken for granted, not even grandparents. This is why a Foundation for Grandparenting has been launched in the States in order to ‘teach people the importance of grandparenting and to help reconnect the generations’.

We may sneer at such an emotional and American approach to social engineering but we can’t sneer at the fact that those American grandparents have won for themselves what British grandparents don’t have.

Grandparents and grandchildren need each other after all. Remember the odd couple on the Tube. If Terry’s mum and dad were to split up — as unfortunately they are 50 per cent likely to do — I would very much like to think that the law was on the side of Terry’s grandad and their continued happy outings on the District Line.