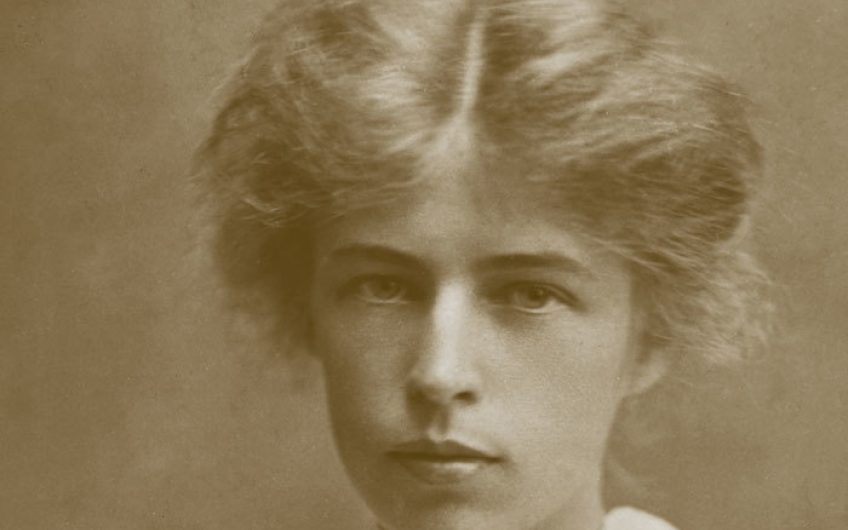 After my 80th birthday, I decided it was time to end the prevarication of decades and sort out some of my more ignored or put-aside affairs.

Tidying up, sorting out and binning were the three intentions. When rummaging through an old and rarely used desk, I found a wide variety of knick-knackery, including a Tunbridge Ware box containing Victoria and Edward VII stamps, a packet of pen nibs fashioned from quills, a leather wallet full of fishing flies with lovely names – Ramsbottom’s Favourite, Blae & Black, Green Highlander, Wee Welsh Devil – a suffragette medal, a tin labelled ‘For Christmas’ containing silver threepenny bits and a pack of sepia postcards from ‘Egypt and Mesopotamia’.

At the back of the bottom drawer, there were three volumes of diaries marked ‘DAISY DOBELL, 1880-1900, WHITTINGTON COURT, CHELTENHAM.’

My grandmother. I opened one and was immediately enchanted and amused – and astonished by the entry. (I have kept her idiosyncratic spelling and grammar throughout.)

Spring, 1893 (Daisy is 15):‘Then Mr Birch came down and got into our boat. He rowed a little and then sang a little, and I looked at him sweetly and smiled at him, but of no avail he took no notice. He sings beautifully with a bass voice, but don’t you know I had a sort of blushing feeling for him when he went to high notes.

‘I think that he has had a sad love story, for when we 1st. saw him he had a black band round his sleeve and when singing love songs (which he usually does), his eyes, I think, fill with tears and he does it so naturally and sadly, and in places his voice seemed so tender, and perhaps why he’s bald is ’cos his hair came off with sorrow like some people’s go gray.’

I read through all 64,000 words in one sitting, through a mixture of Daisy Ashford, Nigel Molesworth and Fanny Burney. Most of what’s recorded evinces the wondering and innocent world of childhood. Here she is, aged 13, in church: ‘There was an awfully sweet tenor – I realy thought perhaps it might be God but I changed my mind at the end and decided it was William Lawrence.’

This naivety develops into an ardent adolescence. Aged 15, she writes, ‘On the way home – I took Eric’s arm. His is such a nice arm, and he seemed as tho’ he was pleased, and I liked to sort of move my fingers (tho’ almost if not quite imperceptibly) on his arm, and he sort of pressed my hand tight. Oh what a little sort of flirt I am, and could be more if I dared, it is dreadful.’

And finally Daisy develops the amused cynicism of an adult. At Christmas 1893, Daisy, 17, writes, ‘Miss Grant was too funny for words with her ear trumpet and so coquettish too: if she found two people standing by chance under the mistletoe, she always informed them of the fact with a knowing look; and if she saw people sitting anywhere at all dark, she smiled meaningly.’

There are not many dramas in this almost dreamlike life of a girl in rural England in the late Victorian era. Above all, it is people who amuse and interest Daisy, and she has a keen sharpness to her observations, whether at the age of 12 – ‘Miss Tomlins [her governess] is very prim, but she calls herself very wild’ – or at 17: ‘Mr Guiness, very friendly and jokey to every one – a rich Irish brewer, and looked it – rather vulgar’; and ‘Miss Macauley, who has a sort of mania on mildew and will do scarcely anything because of it’.

Daisy’s father was a brewer, too, and owned several public houses in Gloucestershire. The family was considered rather ‘Bohemian’ by the squirearchy of the county. Uncle Sydney Dobell was a well-known poet of the Spasmodic school; the artist uncle, Briton Rivière, was a Royal Academician. Family friends included Robert Browning, George MacDonald, John Ruskin, Holman Hunt and Tennyson.

Daisy mentions little of these characters who were mostly based in the artistic circles of London. She is more interested in the people closer at hand. Here she is, aged 16, in a stagecoach: ‘The curate, startled, looked up from the paper he had been perusing, with a smile. “I say,” remarked his friend, “would you like a fowl, we have plenty up here.” The curate, with a benign smile crossing his chisselled features, answered “No, thanks,” then, as tho’ a great idea had seized his mind, he said “its foul enough here”. Then he reddened considerably and buried his burning face in his newspaper. I, the silent spectator, almost felt sorry for his shame and unhappiness.’

I telephoned Jenny Stringer, the incumbent of Whittington Court: ‘I am the grandson of a Daisy Dobell; have you ever heard of her?’

‘We certainly have – here she is known as Naughty Daisy.’

My wife Dominie and I had a delightful stay at Whittington Court as Jenny’s guests. Little seems to have changed over the decades. It was very poignant staying in the house where my grandmother Daisy had had such an enchanting childhood.

It was delightful to see that it is still a family home; amusing, too, to see her signature, which she carved into the ancient timbers and masonry. Thus the nickname Naughty Daisy.

Here is Naughty Daisy, in summer 1893, aged 15: ‘I and John looked at a book together and his shoulder looked so comfortable and near mine and I felt so inclined to rest my (weary) head upon it. Of course I didn’t. I wish he would kiss me. If possible I shall get him to before he goes.’

I regret that after the diary, and her marriage, Daisy had a most uneventful life. In 1900, she married John René Courtauld. They had two children: a son who died after one day, and George – my father. There are also two grandchildren, eight great-grandchildren and 15 great- great-grandchildren. Daisy lives on.

The marriage wasn’t a success. In 1912, Daisy and John separated (they didn’t divorce). Daisy lived in a small cluttered flat in Dorset Square, London, for the rest of her life.

My grandmother was 93 when she died, in 1968. So it is as an old woman that I always remember her – an animated, vivacious old woman.

She had a young and frequent giggle, and a sharp mind which did not brook affectation or silliness. As a girl she had been pretty, despite the ‘pimpoles’ she agonised over. An unhappy marriage and old age had sharpened her features but, even in great age, she was not unhandsome – although her profile was dominated by a ‘Duke of Wellington’ nose.

She never wore make-up and disapproved of painted nails. Her clothes were simple yet severely elegant: long skirts and dresses and jackets, smartly but plainly cut, with no patterns or designs and of severe drab colour.

She was very thin. When she ate, she did so without apparent enthusiasm, with tiny little nibbles, her teeth making an intriguing tapping noise; I think she may have been anorexic. My father said that, as a mother, she had an impatient temper but was very loving.

The Naughty Daisy of the diaries is delightful, enchanting and naive but also shrewd and funny – sometimes not intentionally.

You are too good to moulder unseen at the back of a drawer, grandmama: I have published your memoirs to introduce you to other people who may love and laugh with you more than 130 years later.