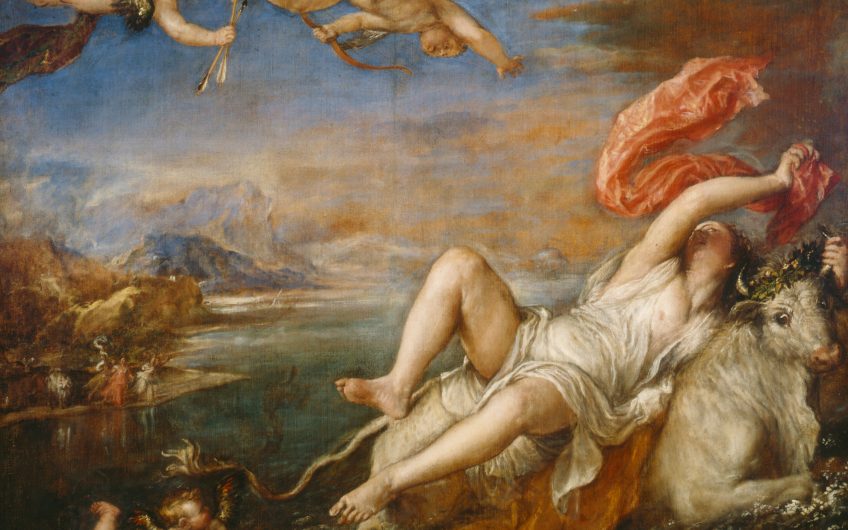 The new Titian show at the National Gallery (opening on March 16th) is a triumph of painting – and a triumphant retelling of the Greek and Roman myths.

All six pictures draw from the myths: Danae, Venus and Adonis, Diana and Actaeon, Diana and Callisto, The Rape of Europa (pictured), Perseus and Andromeda and Death of Actaeon.

How incredible the survival of classical myths are - and how brilliant their stories.

The Greek myths date right back to Linear B, the language that predated Greek, used from around 1450 to 1200 BC in Knossos, Pylos, Mycenae, Tiryns and Thebes. It was in Linear B, too, that the Greek gods first appeared, most prominently Zeus, Athena and Hermes. By the time Homer got to writing about the gods in the Iliad in, it's thought, the eighth century BC, he had formed a complete, coherent, influential picture of their existence: what they represent, their hierarchies, their celestial life on Mount Olympus and their relationships with mortals and priests.

The Greek historian Herodotus said Homer ‘first fixed for the Greeks the genealogy of the gods their titles, divided among them their honours and functions, and defined their images.’ Quite an achievement, given the 600 Greek gods and their incestuous family tree – the royal families of Europe had nothing on them.

The gods were so omnipresent in the ancient world that there was no Greek word for religion. Religion was so infused into everything, so part of everyday life and conversation, that it wasn’t thought of as its own separate entity.

Even if Homer’s picture of the Greek myths was fully formed and internally coherent, that’s not to say it was set in stone. As Greek literature developed in the wake of The Iliad and The Odyssey, the myths were mangled for dramatic effect.

In earlier versions of the Medea story, the inhabitants of Corinth murdered Medea’s children. Euripides made the story more shocking, by having Medea kill them herself. What literary confidence to play with ancient mythology to make good copy; like Shakespeare taking the medieval story of King Lear, and deciding to kill off Cordelia and Lear to sex up the tragedy.

Today, those myths remain extremely protean – as in the Homeric sea god, Proteus, capable of changing into a leopard, lion, pig, tree or stretch of water. Even if we’re familiar with the original story of, say, Theseus and the Minotaur, we’re perfectly happy for that original story to be warped out of all recognition in cartoons, comic books and films. The 2010 science fiction film Clash of the Titans had little in common with the 1981 film of the same name, let alone the original Greek story of Perseus and Andromeda, painted by Titian in the National Gallery show. The connections between the 2004 film Troy, starring Brad Pitt and Orlando Bloom, and The Iliad are tenuous.

But we don’t mind this butchery of Homer, the way we do a bad film adaptation of our favourite Charles Dickens or Evelyn Waugh novel. For all their genius, Dickens and Waugh are still specific to their time and place – any fiddling around with the details offends and throws the whole production out of whack. With epics like The Iliad and The Odyssey – and with ancient myth – the characters and stories have become so elemental that they take on a life of their own. They can be pillaged and cannibalised in little chunks for their individual symbolic value.

You can pick and choose iconic elements – Heracles’s strength, Odysseus’s search for home, Helen’s beauty – and transfer them to the modern age, without having to import the whole story and all its baggage. The apparently eternal power of the Greek and Roman gods – and Homeric epic – survive constant reinvention.

BOOM! It had all gone kablooey... Simon Weston remembers the Falklands