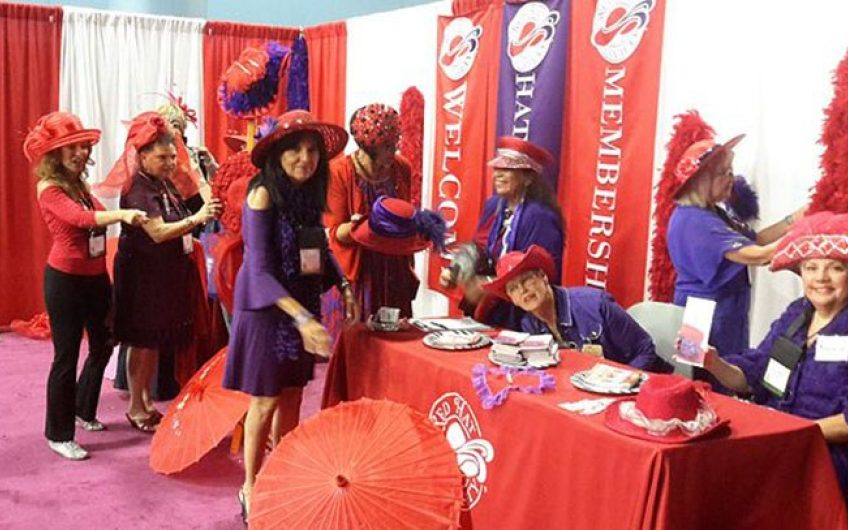 The Red Hat Society booth at the AARP convention in Miami, Florida in May of 2015
View Full Size
1
of 1

With a membership of over 30 million elderly people, the AARP is one of the most formidably wealthy and politically powerful lobbies in the United States. The late Christopher Hitchens, who died 10 years ago, reports on the ‘Gray Panthers'

Perhaps not until the bright autumn of Ronnie Reagan’s senescence did most people learn to fear the awesome power of the American oldster.

But, if ever you doubt the potency of the grey lobby, there are two easy ways to remind yourself. One is to take a short walk in the downtown area of Washington DC. There you may view the headquarters of the American Association of Retired Persons (AARP), one of the most puissant lobbies in the nation. The offices cover the extent of one city block, and have the magnificence and heft of a grey Lubianka. Just walking around the outside of this imposing palazzo is to court the cardiac arrest about which so much nonsense is talked by the exercise industry.

A less exhausting way of getting the same point is to look up the AARP in the New York telephone directory, and let your gnarled fingers do the walking. There is the listing, conveniently prefixed by a toll-free 800 number. And there, next to it in a handy family pack, are the blue-chip numbers of America’s health, car and home insurance rackets — Prudential, Hartford and the rest — clustered with tempting cruise-line numbers offered by American Express.

This packaging is at the heart of AARP’s secret formula. Since its foundation in 1958, when health insurers refused to sell policies to the over 65s, it has been able both to found its own profitable insurance company and to persuade other corporations to insure ‘the wrinklies’. (Actually, it may be smarter to shop around; a Consumer Reports study back in 1976 found that AARP’s own label, unenticingly named Colonial Penn Medicare, was the worst insurance cover that money could buy.)

Things have smartened up a bit since then. One of the cleverest decisions made by AARP is — you don’t have to be retired, or even old, to join! The bizarre category of ‘non-elderly’, which covers those aged 50 to 65, accounts for 38 per cent of AARP’s membership. ‘Fully retired’ describes only 54 per cent of those enrolled.

Indeed, the whole strength and prestige of the AARP depends on the refusal of millions of ‘Gray Panthers’ to consider retirement; devoting themselves instead to incessant good works and public activism.

To take a suggestive sample: of the New Hampshire delegates to the last national Republican Convention, which was held in far-off Miami, 35 per cent were AARP members. AARP’s membership accounts for 20 per cent of all registered voters — not as fantastic a figure as it sounds, when you consider the utter indifference of the young to party politics and the fact that AARP’s membership is over 30 million. This, by the way, makes it the second largest membership organisation in the United States, after the Roman Catholic Church.

As a result, and given the awesome fund-raising capacity of this canny old outfit, politicians roll over for it, and then get up and roll over again. The last statesman to defy the AARP was Barry Goldwater in his doomed 1964 campaign. He was against the Medicare programme and insisted, as a matter of principle, on delivering his keynote speech on the subject at the AARP annual convention. His handlers told him that such honesty was political suicide. Boy, were they right.

Here is why, if you were just passing your 50th birthday, you would be smart to join the AARP at the low, low subscription price of five dollars per annum. For this small consideration, you may consider yourself enrolled, not in some eventide book-club, but in the National Gerontology Resource Center, which is a much more big-artillery sounding outfit.

Their motto is: ‘To serve, not to be served’, but don’t let that put you off. Don’t be put off, either, by the fact that the promotional literature lists: ‘President — Robert Maxwell [no relation]; Immediate Past President — Mrs Louise Crooks’. All the subsequent emphases are on getting served and not on serving. You receive a free copy of Modern Maturity, one of America’s fattest glossy bi-monthlies, and the largest- circulation magazine in the country.

Then there are the guaranteed discounts at car-rental and hotel chains such as Hertz and Sheraton. Perhaps as a concession to the folks at Hertz, there is also a ‘program’ jauntily called ‘55 Alive/Mature Driving’, which describes itself carefully as a ‘driver-retraining’ course. There’s a mutual fund service, combining the sapience of seven different tax-shelter and money funds, an insurance plan run by Prudential and (nice touch) a special insurance policy for those who live in mobile homes.

Special access to advice on medical prescriptions, legal matters, consumer services and charities is also advertised in the up-to-the-minute language of ‘self- worth and self-reliance’, ‘personal growth’ and ‘training’.

Generally speaking, Americans take pot-luck when it comes to health care. They do their best to work for employers who subscribe to private health schemes, and they pray that they and their families won’t get sick. For the ‘maturity community’, though, there is some pretty powerful lobbying. AARP spent over $2 million to promote the idea of government funding for long-term medical care for the elderly, at both the nursing home and home-care levels.

Free TV time was offered to candidates who would endorse the idea (which both George Bush and Michael Dukakis were quick to do). By these and other means, things have been so arranged that Americans over 65 now absorb — according to a report in Money magazine — 27 per cent of the federal budget, compared to 14 per cent in 1960.

At this rate, a backlash against grey privilege cannot be long delayed.

Modern Maturity seems oblivious of this risk, smugly telling advertisers that the average net worth of its readers is well over $100,000 and otherwise flaunting the grey lifestyle. The current hot issue at AARP headquarters — did I mention it was so big that it has its own postcode? — is concentrated harassment of the Equal Employment Opportunities Commission for foot-dragging in the matter of age discrimination. Whistle-blowers have alleged that the EEOC has gone slow on age discrimination lawsuits, in the hope that the cases might, well, lapse. At a time of high and growing unemployment among school-leavers, AARP is just waiting to be attacked for, as it were, clogging the national arteries with old-timers.

Demography, however, is on the oldsters’ side. The average age of Americans is rising with every year, and it has been calculated that by the year 2015 46 per cent of the adult population will be eligible to pay their five bucks and join AARP. At that point, of course, baby boomers such as oneself will have become grey and paunchy enough to chair local chapters, fan the flames of grievance and otherwise ensure a pleasurable and profitable old age. When everybody is an oldie, and the piss and vinegar of the Peter Pan generation is stirred into the mix, it will be the insurance companies versus the youth market and, on current odds, a no-contest victory for the former.

Oldie cartoon predicts the discovery of a 20,000-year-old mammoth fridge