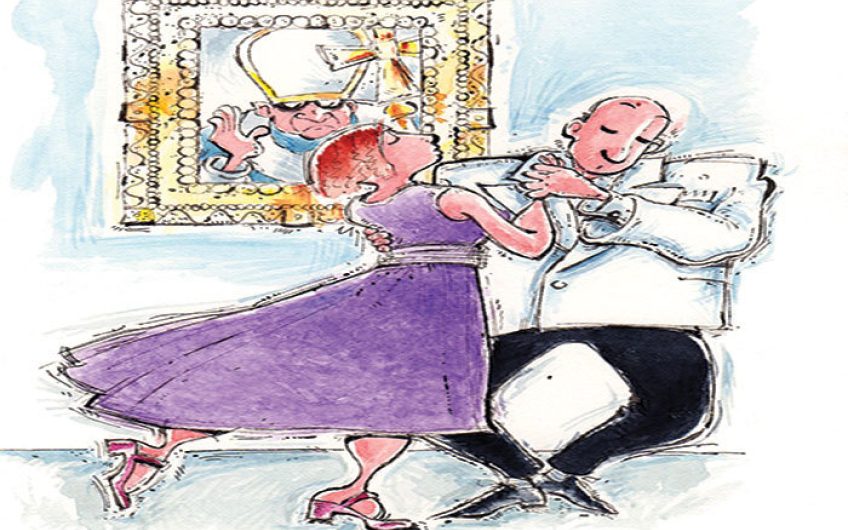 In the last few months I’ve been to tea dances in the Blackpool Tower Ballroom, the Royal Opera House, Shoreditch Town Hall, Battersea Town Hall and the O2 Centre in Finchley Road. I’ve been to supper dances in a five-star hotel in Majorca, a small village in Essex (black tie optional) and the Guildhall, Cambridge (black tie please). But I had the most fun in a Catholic church hall in Acton. Well, it’s not every day you can jive underneath a huge portrait of the last Pope for under a fiver. As it turned out it wasn’t just the Pope that made it different. It soon became quite obvious that although the occasion was advertised as a tea dance, running from two till five, we were about to enjoy a ceilidh (in other words, a Celtic shindig).

The DJ, Bob, is wearing a black cowboy hat, black jeans and a black T-shirt. Although a large man, he exudes rhythm. He plays what can best be described as country and western with its roots in Ulster, alternating with popular Irish songs.

At the long bar the Guinness is flowing and Raymond is soon in a very good mood. I sometimes boldly refer to Ray as my dance partner, but he’s not, he’s my dance instructor. He learnt to dance at his Secondary Modern when he was twelve. An enterprising headmaster had told the boys it was a good way to meet girls. He made them Brylcreem their hair, brush their shoes and wear clean shirts. Not only did Ray meet lots of girls, he also discovered he had talent. When he was just twenty he won the world championship for Latin American dancing and the British Ten Dance championship. Ray is now 65, but something called muscle memory has meant that he hasn’t forgotten anything.

Of course I’m lucky to have him as a partner, but he is very strict. ‘Did you do a heel turn? I thought not.’ ‘You can’t have forgotten the tango chase, you only learnt it last week!’ Happily the Guinness and the atmosphere have had an effect – Ray is beaming and has stopped complaining.

The tempo of ‘When Irish Eyes Are Smiling’ is like a slow Viennese waltz or a fast ordinary one, so we do a cha-cha-cha. The DJ plays ‘Home on the Range’. Hard to know what dance we are meant to be doing, so we do a sexy rumba. A woman, clearly impressed by Ray’s hip movements, leads him onto the floor. I’m left sitting under a large sign which says ‘Do not stand on the tables’, but Raymond is not the only one enjoying the Guinness and I’m soon doing a sort of jig with a man from Belfast.

A circle of twenty people is formed and everyone takes their turn in the centre to dance. Raymond does his John Travolta Pulp Fiction imitation. You couldn’t say there’s much physical resemblance – there’s the age difference and Ray’s lack of hair for a start – but Ray has all the confidence of someone who knows they are really good at something, and there is much clapping as he twists away. One lady does the Charleston and a portly gentleman attempts a Russian folk dance. Not wishing to be pulled into the centre I head for the bar and buy a round for our table. Ray has decided that as long as the music is slow enough it will suit the Argentine tango. Johnny Cash is singing ‘Streets of Laredo’. ‘Keep it simple,’ I beg as we take to the floor. I’ve only been learning it for a month, but it’s not appropriate to come over all shy and as I drape myself round Ray, he leads me through barridos, ganchos and ochos.

One or two women have asked Ray if he will teach them the Argentine and as we leave he says he can feel his ego swelling a little and will I please tell him if he’s getting too big for his boots. Well in 45 years I never had much success in cutting my husband George down to size, but for such an enjoyable task I’ll have a go.