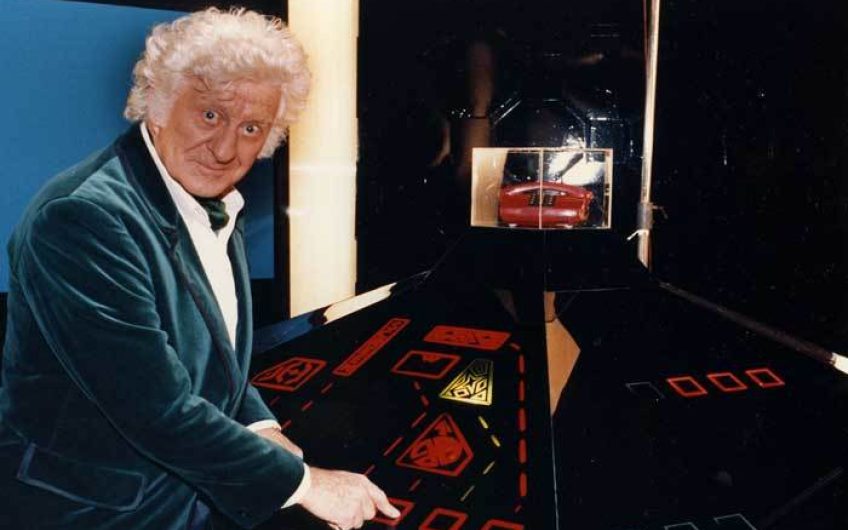 The son of Roland Pertwee, a scriptwriter for Gainsborough, a cousin of Bill Pertwee, the loathsome Warden Hodges, and the father of Sean Pertwee, a versatile actor, Jon Pertwee – a Huguenot name originally: “Perthuis” – was born one hundred years ago, on July 7, 1919.

He was a gangling player, who never sought to shake off his broad music hall origins. He appeared on the bill at the Glasgow Empire with other grotesques such as Max Wall, and I have seen newsreel footage of charity cricket matches, where Pertwee did silly things with his balls and bats in the company of Tommy Cooper and Richard “Mr Pastry” Hearne.

As a young man, he resembled Danny Kaye – was mistaken for Kaye by autograph hunters. Indeed, in the film Knock on Wood (1953), it is Pertwee who doubled for the American star in long shots and the second-unit footage shot in London. Red-headed Pertwee, as Kaye, clambers over cars and flees from the villains, hand-in-hand with Mia Zetterling.

Pertwee also aped Kaye’s comic exaggerations and gibberish voice, especially on radio. Between 1959 and 1977, he appeared in 244 episodes of The Navy Lark, along with Leslie Phillips and Ronnie Barker. As the Chief Petty Officer, and innumerable other characters, including politically incorrect Indians, Pertwee gloried in the comedy about service incompetents.

He himself had had a good war. Pertwee served with Naval Intelligence, alongside (he claimed) Ian Fleming, “teaching commandos how to use escapology equipment, compasses in brass buttons, secret maps in white cotton handkerchiefs, pipes you could smoke but also fired a .22 bullet.” This would provide useful inspiration for Dr Who, with the character’s ingenious sonic screwdriver and deadly fountain pens.

Pertwee was the third Dr Who, taking over from Patrick Troughton in the Seventies. The performance was foppish in the extreme – almost transvestite – and involved a costume of chiffon scarves and velvet coats, smoking jackets, capes and ruffled shirts. Pertwee’s hair was a mauve rinse, immaculately coiffed. He drove a Mr Toad yellow vintage car.

This was the first season of the show to be broadcast in colour, which may explain the flamboyance. But the camp was counterbalanced by Pertwee’s understated interest in his frankly sexy helpmeets, Katy Manning and Sarah Jane Smith. In the Seventies, these would have been known as the crumpet – and for those of us who were teenagers at the time, forty years on they remain memorable, as they did the Doctor’s bidding, helping Earth overcome threats from tin-foil-and-rubber aliens, principally Roger Delgado’s evil mastermind, known as The Master.

Pertwee was replaced by Tom Baker, with his theatrical voice. Pertwee never severed links with the show, however, and carried on playing Dr Who on radio, in video links and at fans’ conventions. His catchphrase was “reverse the polarity of the neutron flow!” – as impressive as it was meaningless, as neutrons are subatomic particles with no electric charge.

Pertwee’s next big hit on television, in the Eighties, was about the scarecrow, Worzel Gummidge, in which his lanky frame was made up to resemble a parsnip. The series was filmed in Hampshire. Una Stubbs was the frigid skittle Aunt Sally. Barbara Windsor was Saucy Nancy. Further episodes were made in New Zealand, and the young Peter Jackson did the special effects. There was a musical in the West End, written by Keith Waterhouse. A record entitled Worzel Gummidge Sings reached number thirty-three in the charts in 1980.

Pertwee endured a long run on the London stage with There’s a Girl in My Soup. The role of the womanising celebrity chef was played by Peter Sellers, however, when the film adaptation was made by the Boultings. As regards his own film career, Pertwee is a soothsayer in Carry On Cleo and in 1978 he played a womble in Wombling Free, directed by Lionel Jeffries.

Apparently, David Croft had originally wanted Pertwee for Captain Mainwaring – a catastrophic idea. The Dad’s Army role is unimaginable without Arthur Lowe. Pertwee would also have clashed with Clive Dunn, who had a similar comic style – jerky, puppet-like, pantomimic, pretending to be older than his years.

Pertwee always had a lot of frantic energy and he remained essentially a children’s entertainer, I think. In 1972, he even made a novelty children’s album, Wonderful Children’s Songs, with June Whitfield, in which he sang “The Ugly Duckling”, from the Hans Andersen musical, made famous by Danny Kaye. He died in 1996, aged 76.

I myself saw him wrapped in bandages as Marley’s Ghost, with Anthony Newley as Scrooge and Stratford Johns as The Ghost of Christmas Past, in a Leslie Bricusse musical, which had somehow found its way to Oxford. Again, there was a good deal of business, general jiggling about, rattling the chains and the metal strong boxes. But Marley only appears on that one scene, early on. What a long time Pertwee had to wait in his dressing-room, I felt, before he could come on for the curtain call – two hours at least.

The genius who shot The Deer Hunter - Charles Elton