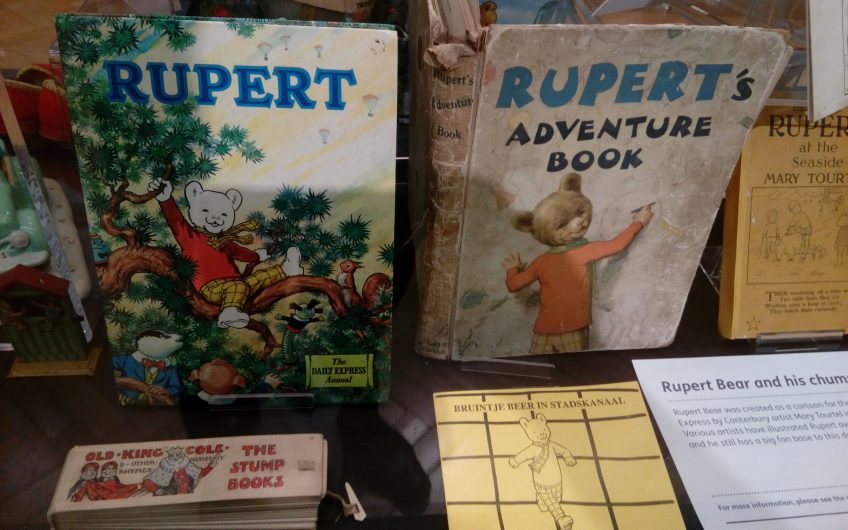 Gyles Brandreth sings the praises of his favourite bear, who’s had new stamps printed for his birthday

When I die, I hope to go to Nutwood. It is my idea of heaven.

Nutwood, as every oldie surely knows, is the idyllic English village where Rupert Bear has been living for the past one hundred years. Rupert, for me, ranks alongside Winnie-the-Pooh, Paddington, Peter Pan and Harry Potter, as one of the iconic creations of British childhood but, while A A Milne and Michael Bond, J M Barrie and J K Rowling are universally celebrated, most people I meet don’t seem even to have heard of Mary Tourtel.

Mrs Tourtel was 46, and an established children’s book illustrator, when she created Rupert in 1920 as a direct result of a newspaper circulation war. In 1915, the Daily Mail had introduced its readers to a strip cartoon featuring a mouse called Teddy Tail. In 1919, the Daily Mirror followed suit with a dog, a penguin and a rabbit named Pip, Squeak and Wilfred. The Daily Express, then the country’s best-selling newspaper, knew it had to follow suit. Herbert Tourtel, the paper’s news editor, thought his wife might be able to come up with something suitable. She did, and, on 8 November 1920, two cartoons featuring the first adventure of ‘Little Lost Bear’ appeared in the pages of the Daily Express.

Initially, Rupert was a furry brown bear who wore a blue jumper and grey trousers. To save money on the cost of ink, he quickly became a white-faced bear and, over time, with the advent of full-colour Rupert Annuals, he was given his trademark red and yellow livery. Tourtel wrote the stories (in verse and prose) and drew the illustrations for 15 years, until failing eyesight forced her to retire in 1935. She handed over her creation to Alfred Bestall, a Punch artist who had illustrated stories for Enid Blyton, and for the next forty years Rupert was Bestall’s baby.

Because those-who-know reckon Bestall the superior artist, because he was the author of the Rupert Annuals from the mid-1930s onwards, and because of a 1982 television documentary by Terry Jones that rightly lauded him to the skies, Bestall is often wrongly credited with being the genius who gave us Rupert. Certainly, he enriched and broadened Rupert’s world, but Tourtel is the bear’s only begetter and she is the one we need to honour in this centennial year. Her work is on the cover of the Oldie. The below picture is by Bestall,

She created a unique character in Rupert (decent, heroic and endearing) and a world for him to inhabit that is both totally bizarre and wonderfully reassuring. It’s a world where the anthropomorphic animals, whether they be dogs (PC Growler), mice (Willie), or elephants (Edward Trunk), are all roughly the same size, where diversity is the order of the day (oh yes: there is a mermaid who identifies as a merboy and a raft of Chinese characters, from Pong-Ping the Pekingese to Tiger Lily, the conjuror’s daughter, who are in no sense caricatures), and where there is fantasy of the most dramatic and fantastical kind but nothing fundamentally to fear. In every story, Rupert sets off from home and becomes involved in high adventure. At every story’s end, he comes home again, and Mr and Mrs Bear are there waiting for him as if nothing out of the ordinary has happened.

If I get to heaven, I expect to find Rupert and his best friend Badger Bill waiting to greet me at the pearly gates, and I have no doubt at all that God, when I meet Him, will look like the Wise Old Goat, the kindly sage of Nutwood.

In 1940, in the darkest days of the Second World War, when a German invasion seemed a real possibility, the question arose: if the Nazis land at Dover, what do we do with the Royal Family? Several courtiers and not a few politicians suggested that Canada would be the best safe haven for the King and Queen and their two young daughters – specifically, Victoria Island in Vancouver where, eighty years on, Harry and Meghan have sought their non-royal refuge.

Of course, George VI and Queen Elizabeth were having none of it. Pressed to suggest a safe house away from London and Windsor, they proposed Newby Hall, near Ripon in North Yorkshire, the family home of their good friends, the Comptons. The house (designed by Wren) was readied for the royal guests; the grounds were fortified. Happily, the German invaders didn’t make it – but my bears did.

The Compton family have built a Bear House in the celebrated gardens of their stately home and it now houses my collection of more than a thousand teddy bears, including not a few German ones. Though the teddy bear gets his name from the 26th US President, Teddy Roosevelt, the stuffed toy bear as we know it was pioneered by a German company, Steiff. My hug (that’s the collective noun for a group of teddies) includes a Paddington given to me by Michael Bond, the original Fozzie Bear presented to me by Jim Henson, a Winnie-the-Pooh blessed by the real Christopher Robin and (behind reinforced glass) Tony Blair’s bear, Lynton. This year I am saving up to buy the newly-issued Steiff Centenary Rupert. He’s a snip at £ 225.