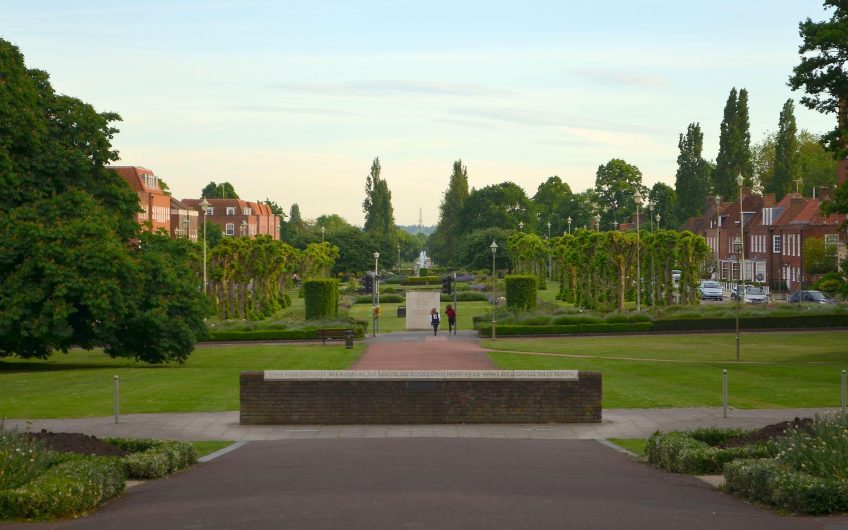 Hertfordshire was home to the first two garden cities, Letchworth and Welwyn Garden City, thanks to their closeness to London.

They were founded in 1903 and 1920 respectively, pioneers in Sir Ebenezer Howard’s campaign to build new developments in virgin countryside, rather than adding to the urban sprawl building up around long-standing cities, London in particular.

The garden city doesn’t fit in with the clichéd analysis of Englishness - as the spiritual home of old, rural buildings, of the ancient castle and the country house. We are now a largely urban and suburban race, and around 40 per cent of us live in houses built since 1965. Between 1958 and 2011, 300,000 Barratt Homes were built – more than one in 70 of all homes in England and Wales. Richard Seifert's architectural practice - founded in 1947, and responsible for Centre Point and the NatWest Tower - built more buildings in London than Christopher Wren ever did.

English eyes tend to settle on the old and hallowed, on the rare gems built by architects like Wren, editing out the great waves of 20th century buildings across the country. They also censor the garden city, a revolutionary English urban movement that influenced new towns from Finland to Virginia, from Hong Kong to Germany.

Horrified by the squalor and chaos of Victorian city slums, Howard envisaged Utopian cities where people would live in harmony with nature. He realised that cities were ideal for social opportunity, amusement and high wages. But he also could see no reason why those advantages shouldn't be combined with the joys of the country: the beauty of nature, fresh air, and an abundance of water, woods and meadows.

That was the thinking behind Letchworth, 34 miles outside London. With the architects Barry Parker and Raymond Unwin, Howard turned 3,800 acres of agricultural land into a city built along radial boulevards, with a high proportion of parks and open spaces. To maintain the greenness of the garden cities, Howard stipulated an extremely low population density of 25 houses per acre.

Garden cities should be of limited size, Howard said, wrapped in a green belt of countryside, with a careful combination of factories, shops and homes. The idea was that the new cities shouldn't be commuter towns, but would provide employment themselves, with workers walking to factories through gardens and parks threaded along the streets, enjoying the country right outside their front door.

With the expansion of commuter life over the last century, and the growing domination of London, that part of Howard's vision has not been realised - much of Letchworth and Welwyn Garden City have become dormitory towns for the capital.

There was to be no government interference in the building of the garden cities, either. The land, owned by trustees, was leased to the citizens, who then managed the town themselves; within a decade, Letchworth was self-supporting.

Not everyone approved of the new cities. The writer HG Wells attacked them, saying, "A girdle of factories between house and country would not be so agreeable a prospect as it is to Mr Howard. Why help dot the countryside for 60 miles round London on every side with detestable little factory chimneys, each with its group of blighted homes about it?"

Wells’s attack was typical of the sophisticated intellectual's horror at the popular English taste for old-fashioned, domestic values. That didn't stop the new residents of the garden cities loving their supposedly blighted homes. They moved in their thousands from London, drawn by tube posters offering an urban-rural, sporting life less than an hour from Piccadilly.

The new houses were built on a larger scale than their tiny London homes, too, at the maximum size allowed under contemporary legislation. If anything, people liked the garden cities too much. Aimed in part at working-class residents, the developments were so sought after that they became largely middle-class enclaves.

Like Metroland, garden cities were built in an old-fashioned, ultra-English style. Letchworth Railway Station had mullioned and leaded windows, and a timber roof. The post office was housed in a handsome, Jacobean-style building; the bank was built according to traditional classical principles. Residents lived in neo-Georgian houses and mock-Tudor cottages with dormer windows and red-tiled roofs.

The gently curving streets were lined with trees, including cherry trees planted by Howard himself. His high-minded vision perhaps went a little too far only in the Skittles Inn in Letchworth. The pretty gabled pub with double verandahs had only one drawback for a quintessentially English group of home-owners - it served no alcohol. It lasted 18 years before becoming an adult education centre.

For all the success of Letchworth and Welwyn, no more garden cities were built, but they had a major influence on the 30 New Towns built after the Second World War. Three out of the seven satellite post-war new towns are also in Hertfordshire – Stevenage, the first, built in 1946, followed by Hatfield New Town and Hemel Hempstead. The others near London were Crawley, Sussex, and Basildon and Harlow, both in Essex.

Later on, Milton Keynes, Buckinghamshire, was not so much a new town as a new city, swallowing up three towns, 16 villages and hundreds of acres of farmland when it was set up in 1967. It was part of the third generation of new towns, including an expanded Swindon, Northampton and Peterborough, and Telford in the West Midlands.

The garden city idea took root across the world more successfully than it did over here – a rare example of England being a net exporter of architectural style, rather than the importer it was, through the Gothic Middle Ages and the 19th century, and the classical 17th and 18th centuries. Germany created its first garden city, Hellerau, in 1909. Walt Disney acknowledged a debt to the movement in his EPCOT development - the Experimental Prototype Community of Tomorrow.

There are descendants of the English garden city right across America: in Boston, Newport, Pittsburgh, New Jersey, Maryland, New Orleans, Tennessee, Los Angeles and Ohio. The movement spread north into Canada and south into Argentina, too. Canberra, Adelaide and Melbourne all have garden city elements in their suburbs. India, Vietnam, Bhutan, Israel, Morocco, the Philippines...