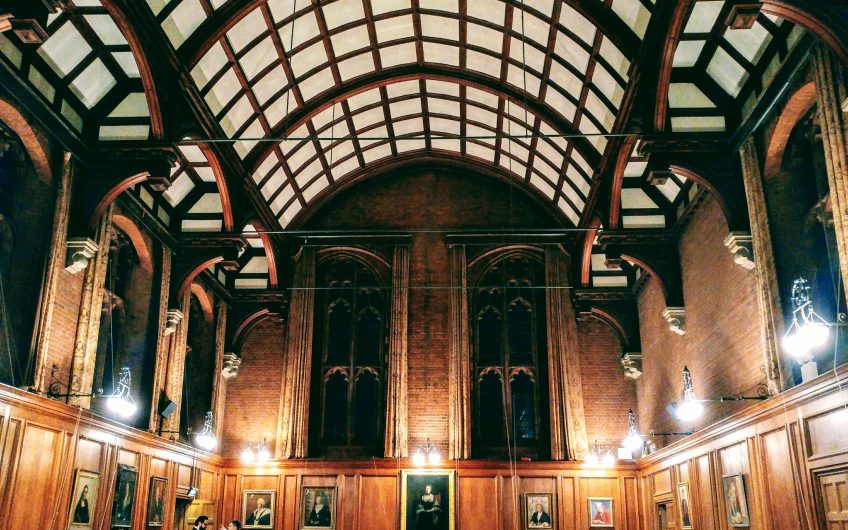 ‘My dear, she was a nice girl, with rosy cheeks and nice manners, and nicely dressed, and you wouldn’t have thought she knew anything!’

Thus spoke a Cambridge hostess in the 1870s, after meeting an early Girton girl. Girton College was the first women’s college in Cambridge, founded 150 years ago, in October 1869.

‘The Girton girl’ was instantly labelled as a bluestocking, lampooned in Punch cartoons and music-hall songs. An educated woman? Preposterous!

But Emily Llewelyn Davies, a squeaky-voiced vicar’s daughter from Gateshead, was determined to found a ‘College for Women’ that would give degrees. She met universal prejudice, not just from men, but from women like the novelist Charlotte M Yonge, whose black-edged letter is displayed in the college library.

‘I have decided objections to bringing young girls together,’ wrote Miss Yonge. ‘Superior women will always teach themselves, and inferior women will never learn enough for more than home life.’

But Emily went ahead, having raised £2,000, including £50 from George Eliot. Five academic young ladies were temporarily installed at Hitchin (where lecturers came to them), while the new college was built in fields at a village called Girton, an uphill bike ride two miles outside Cambridge, deliberately distant from dangerous young men in ancient cloisters. The architect was Alfred Waterhouse: Miss Davies wanted Gothic towers and turrets, ‘as beautiful as his Assize Courts in Manchester’. (So, when I covered the Harold Shipman trial there, I felt thoroughly at home.)

Girton’s heroic lead in 1869 – beating Newnham, Cambridge (1871), Bedford in London (1878) and Somerville and Lady Margaret Hall at Oxford (1879) – was rather marred by Cambridge University’s refusal to recognise women’s degrees until 1948. Before then, the degree was ‘titular’ – written ‘BA (Tit.)’, provoking much ribaldry. Only 50 years later, did pre-1948 graduates – 900 splendid ladies aged between 70 and 100 – descend on the Senate House to get their rightful degrees, one summer day in 1998.

My Girton class of 1965-8 knew no such prejudice. Among them were the distinguished lawyer Dame Mary Arden, now at the Supreme Court, and Arianna Stassinopoulos, co-founder of the Huffington Post. Arianna, a striking figure, became President of the Union.

Most of us admired Girton's intimidating, red-brick solidity. Virginia Woolf first delivered her feminist lecture A Room Of One’s Own in the college’s Stanley Library in 1928.

My tutors, both Americans, chain-smoked sexily throughout supervisions. I boldly trekked daily to the Buttery to buy my 10 Consulate cigarettes. Despite coming from a co-ed state school, I still enjoyed viewing male callers as excitingly illicit; and the quaint rules were easily evaded.

At the annual Feast, we sang the college songs, with pride and hilarity, about beating Newnham at hockey – ‘“Play up,” all the college cried, “Pass out to the wing girls, that’s the sort of thing, girls!”’ – and (to the tune of The British Grenadiers) about taking a teacup to drink the health of ‘Woodhead, Cook and Lumsden, the Girton pioneers’. Those three, all mathematicians, were the first to complete the Tripos. And when the first Girtonian got a First (Miss Agnata Ramsay, in Classics in 1887), she won plaudits, even from anti-feminist Queen Victoria.

This is Girton’s noble history. And I shall never really forgive Girton for being the first female college, in its centenary year of 1969, to admit men. I was a new graduate, working on the Evening Standard diary when the news came. I rang the Mistress, MC Bradbrook, Shakespeare scholar, known as 'Brad', and voiced my dismay.

‘I know,’ she said. ‘You feel amputated from your past.’

She was right: I still do.

Brad explained that we had to take men, because King’s, Cambridge, was taking women: ‘Our founder, Miss Davies, always said that we must do exactly as the men do. The same exams; everything.’

‘Well then,’ I reasoned, ‘Why don’t we copy the men who’ve kept women out for 685 years – and do the same? Let them wait centuries!’ As it was, in poured chaps whose careers masters had told them, ‘Apply to Girton. They’ll take anything in trousers this year’.

I recently attended an Old Girtonians’ wine-tasting event in the City of London. The canapés were excellent and so was the 2013 Marques de Murrieta Rioja, at £48.99. I sat next to a male OG, a hedgefunder who said he was known in his office as ‘Head of Metaphor’. The evening cost £40, in aid of college funds. When I was a fundraiser, on the Girton Task Force, run in the 1980s by the then Mistress, Mary Warnock, it was hard to get OGs to contribute cash at all: puritanical vicars’ wives and headmistresses were affronted to be asked.

All has changed. Girton is a happy ship, proudly egalitarian with its 50/50 male/female ratio. Lots of babies are born to Girtonian couples, the lavish newsletter announces. The Mistress is a glamorous, flame-haired geographer, Susan J Smith.

But… it’s just one of many mixed colleges. Not my glorious, pioneering alma mater any more.