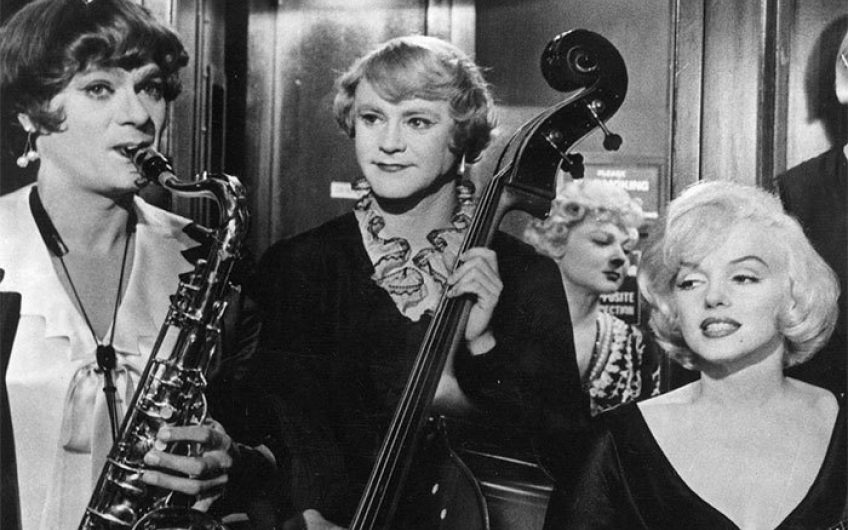 Tony Curtis, Jack Lemmon and Marliyn Monroe in Some Like It Hot (1959)
View Full Size
1
of 1

Who would have thought it was 60 years since Some Like it Hot was first screened?

Shot in 1958 in sunny California, Some Like it Hot features Tony Curtis and Jack Lemmon as hapless musicians working in a speakeasy owned by mobster Spats Colombo. They witness a terrible crime and decide the only solution is to dress in drag, take on new names and get out of there. They meet Sugar Kane (Marylin Monroe) and the rest is history.

The British Film Institute listed it in its top 50 films that should be seen before you are 14. It’s a shrewd judgement, because SLIH appeals as joyously to the young as the old. It is somehow life-affirming and, these days, it seems wholesome.

But that wasn’t the case at the time. Hollywood was in the grip of moral censorship and the infamous Motion Picture Production Code, the Hays Code. SLIH was made without the approval of that code because it tackled themes of homosexuality and cross-dressing. It’s success and its lightness of touch was one of the factors in the ending of that code and climate.

But codes aside, there was more beneath the surface than filmgoers realised. It wasn’t an easy production. Marylin Monroe was magnificent, but the screen magnificence hid some dark truths. She was in the grip of pill addiction and couldn’t concentrate. Her simple line, ‘It’s me, Sugar,' took a mammoth 47 takes. Monroe’s husband Arthur Miller tried to influence the production and this caused great friction on set.

But the magic of the movies is precisely that it isn’t real life. It isn’t fragile actors struggling to say sane and popping pills. Or folk worried about their careers going up in smoke. No, it’s a kind of glorious make-believe that freezes actors in time and means that, whatever happens, they never grow old. That’s why we need cinema and perhaps why we need it more than ever now.

The final line of the film, ‘Nobody’s perfect,’ could stand as a truth well beyond the strictures of the Hays Code. Nobody is perfect, but happily this film pretty much is.

Could anything as simple and sweet and funny be made these days?