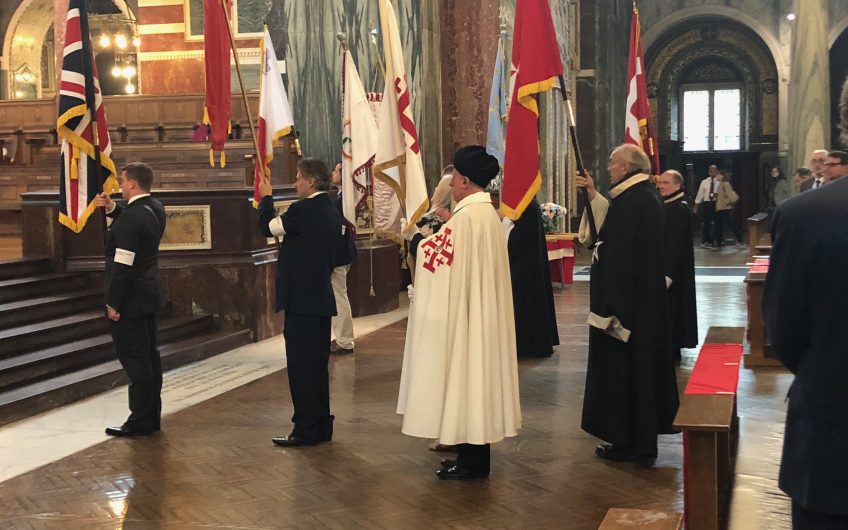 On Saturday, my deeply Catholic father invited his sincerely lapsed son to the Malta Day service at Westminster Cathedral. Clueless, but more than a little intrigued, I accepted.

There was an impressive turnout. Two Maltese excellencies and one minister were involved in the ceremony: Monsignor Paul Cremona, Archbishop Emeritus of Malta; Joseph Cole, the Maltese High Commissioner; and Carmelo Abela, Malta’s Minister of Foreign Affairs and Trade. Also present was an army of religious orders bannered and berobed: the ecumenical Order of St John of Jerusalem, the Equestrian Order of the Holy Sepulchre, and the Sovereign Military Order of Malta (pictured above).

The Knights of Malta ruled the island for nearly 300 years, until Napoleon took a detour on his way to Egypt and took over. However, the Great Ottoman Siege of Malta, in 1565, commemorated at the service, happened under their tenure.

After nearly five centuries and after another unsuccessful siege – the Axis siege in the Second World War – the Maltese celebrate Il Bambina, Our Lady of Victories, for granting the Maltese victory over their would-be invaders, the Ottomans and the Germans. A church dedicated to her still stands in Valletta, built in 1566 with funds provided by Jean Parisot de Valette, the Grand Master of the Knights who oversaw the defeat of the Ottomans, the year before.

Though the siege is the reason for the chosen date, 8th September, the service’s principal aim was to pay tribute to the culture and faith of a proudly Catholic country. Christianity in Malta goes back to 60AD, when St Paul was shipwrecked on its shores, en route to petitioning Nero in Rome.

The prayers of the faithful, given by representatives of both secular and religious groups, buttressed this religious feeling, stressing the importance of bringing the young generation into line with the Catholicism of their forebears, in order to avoid the negative aspects of modern culture.

It was a charming service with the magnificent Gaulitanus Choir and banner-bearers adding to the solemnity of the Archbishop’s good – though a tad long-winded – homily.

Lapsed or not, I could do with a blessing from an archbishop...