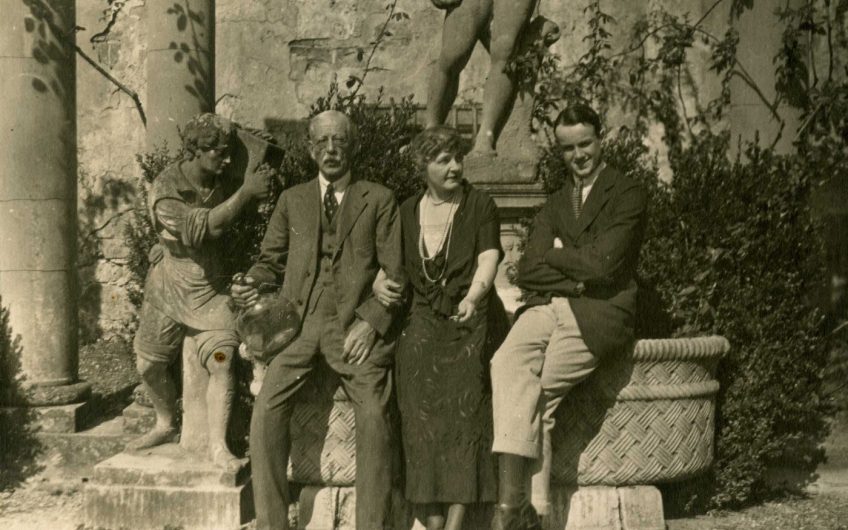 75 years ago, Evelyn Waugh published Brideshead Revisited. When an 11-year-old Harry Mount visited Acton, inspiration for Anthony Blanche, he was only interested in his snacks

Sir Harold Acton was the 20th century's favourite aesthete - an art historian, novelist, poet and the inspiration for Anthony Blanche in Brideshead Revisited.

When I met him, all this meant nothing to me. I was much more impressed by his bacon crisps. It was the summer of 1983, when I was 11 and on holiday with my family in Florence. My great-uncle, the novelist Anthony Powell, was great friends with Acton - and it was thanks to this connection that we came to tea at Villa La Pietra, his Renaissance palace outside Florence.

The villa was where Acton wrote his books and entertained the greats – D.H. Lawrence, Aldous Huxley, Evelyn Waugh among them. I knew none of this. I was, though, impressed by the large pile, covered in fading, peeling yellow stucco, apparently in Tuscany profonde; in fact, only 10 minutes' drive from central Florence.

I remember the enormously long, straight drive, through towering, identical cypress trees, up to the front door. Out of this door came two white-coated servants in their sixties. They led us into the main hall to meet our white-suited host. Acton, then 79, greeted us as he came down the stairs. It was said in an obituary of Acton that no one ever followed him into a room, so highly-developed were his manners. And now he followed us, as he threw the door open from the hall into a darkened room, crammed with the Renaissance paintings collected by Acton’s father, Arthur, whose granddaughter, Dialta Orlandi, has just proved her blood connection to the Actons through DNA tests.

We moved through to the drawing room where we had tea. This was a lighter, south-facing room, looking on to the garden. It was decorated with gilded mirrors, classical console tables and elegant sofas. Framed photographs of Acton in his youth jostled on table-tops with Nubian figures. On the mantelpiece was a signed photo of Prince Charles and Princess Diana, who had spent part of their honeymoon at La Pietra two years earlier. Acton talked of Princess Margaret, who had stayed there the week before, and of his concern that there had been no hot water for her bath. The house still relied on Edwardian plumbing.

Acton was born and brought up in Italy, with a British father and an American mother. These influences accounted for his high-pitched, precise voice, echoed by Anthony Blanche in Brideshead Revisited. In this voice, Acton had recited The Waste Land, from his window in Christ Church, Oxford, at passing rowers 60 years previously, as Blanche does in the book.

In this same voice, according to John Betjeman, Acton said, while at Oxford, ‘My dears, I want to rush into the fields and slap raw meat with lilies.’ And in this voice, he asked my brother, sister and me, ‘Would you like some crisps?’

They were quite the most delicious crisps I'd ever had - bacon-flavoured, but with none of the coarse, bacony flavour of Frazzles, the bacon crisps popular in Britain at the time.

These days, I'm a fully paid-up devotee of Acton's world - of Evelyn Waugh's novels, of Renaissance palazzi. Since Acton died, in 1994, aged 89, I have made three pilgrimages to La Pietra, longing to ask the questions of him that I didn't ask then. I lapped up the tripartite altarpieces and the tiny icon of a weeping Virgin I had missed first time round. I admired the views down to Florence from the enchanted garden, dotted with dozens of classical statues.

Still, neither of those grown-up, well-informed trips held the same enchantment of my visit as an idiot child, when all the Renaissance masterpieces in the world could be trumped by a bowl of bacon crisps.