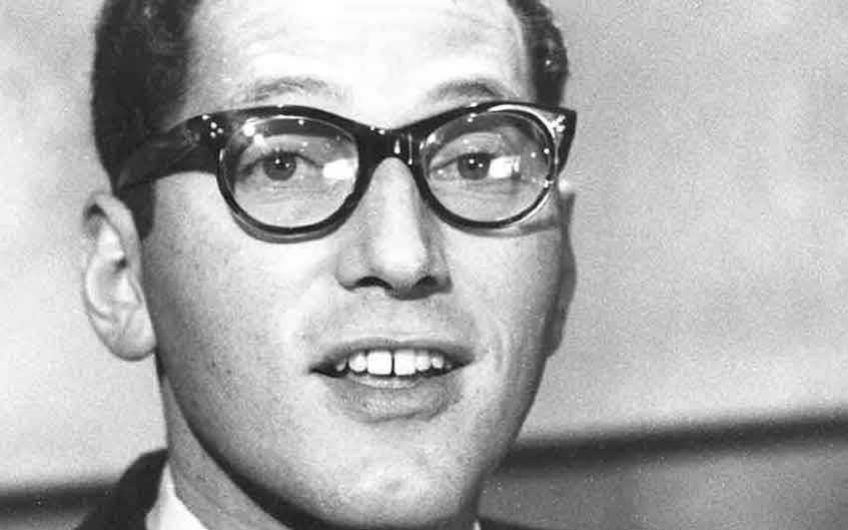 A one-man satire boom: Tom Lehrer in the sixties
View Full Size
1
of 1

Tom Lehrer went from satire genius to Ivy League maths professor. Now, at 94, the great man is giving away his archive. By Francis Beckett

Most famous performers maximise their income.

If I’d had to bet which performer would break that habit, I’d have put my money on Tom Lehrer. In October, Lehrer, aged 94, put his songs on his website and announced that anyone can use them for nothing, until 31st December 2024.

You can even mess around with them; put your own words to his music, for example.

The air will soon be full of folk singing loudly in public: ‘All the world seems in bloom on a spring afternoon when we’re poisoning pigeons in the park.’

Lehrer has always worn his genius lightly. At the height of his fame, in 1972, he stopped writing and performing songs, and went back to being a maths professor at Harvard. He said that awarding the Nobel Peace Prize to Henry Kissinger made satire redundant, but that wasn’t why he gave it up. He was just tired of it, and uninterested in celebrity.

In 1959, Lehrer’s songs burst into my stifling Jesuit boarding school like a clown in a cathedral. With The Vatican Rag, Lehrer taught me the precious, liberating lesson that it was OK to laugh at the Catholic Church. (‘Two, four, six, eight, Time to transubstantiate.’)

We had heard witty songs before – Flanders and Swann, Ian Wallace, Paddy Roberts – but Lehrer brought from the US a sharp, satirical edge that Britain didn’t produce until Beyond the Fringe turned up in London in the early sixties.

There was a political edge to his work, too. Nuclear weapons filled him with fear and anger, expressed in the powerful, very funny We Will All Go Together When We Go: ‘There’ll be no more pain and misery when the world is our rotisserie.’

The cynicism of America’s using Hitler’s rocket scientist for its weapons appalled him: ‘Once it goes up, who cares where it comes down? That’s not my department, says Wernher von Braun.’

But the Left wasn’t allowed the comfortable illusion that it owned him. Every so often he turned round and bit it.

‘You have to admire people who sing [protest] songs,’ he said. ‘It takes a certain amount of courage to get in a coffee house or a college auditorium and come out in favour of the things that everybody else in the audience is against, like peace and justice and brotherhood and so on.’

He sang in a sub-Dylan whine: ‘We are the folk-song army. Every one of us cares. We all hate poverty, war, and injustice, unlike the rest of you squares.’

If only, he mused, folk songs had been written not by the people, but by professionals. So he reworked Clementine as written by Cole Porter, Mozart and Gilbert and Sullivan.

He is a great G&S fan, constantly referencing them. Years after he stopped public performances, in a private show for his maths students he mocked those who use unnecessary technical language, quoting Gilbert and Sullivan’s Patience: ‘If this young man expresses himself in terms too deep for me, why, what a very singularly deep, young man this deep, young man must be!’

His masterpiece also derives from G&S. It’s simply the names of all the chemical elements, sung to the tune of the Major-General’s song from The Pirates of Penzance: ‘There’s antimony, arsenic, aluminum, selenium and hydrogen and oxygen and nitrogen and rhenium…’

Every Lehrer addict knows that song, but only we nerds know that at one performance in Copenhagen he revealed an older version of the song, derived from Aristotle, which, he claimed, went ‘There’s earth and air and fire and water.’

Lehrer’s work has aged well. It’s often as fresh and funny now as when I first heard it, and every so often it gets a sudden, new meaning.

Back in 1959, there was a reference I didn’t understand. It Makes a Fella Proud to Be a Soldier contains these lines: ‘Now, Fred’s an intellectual, brings a book to every meal. He likes the deep philosophers, like Norman Vincent Peale.’

The American audience on the record laughed and laughed, and I assumed Peale was famously vacuous. I never heard his name again until I recently discovered he was Donald Trump’s philosophical mentor. And he is more vacuous than I’d imagined possible.

He was the Trump family’s pastor, and Trump has admired Peale’s sermons all his life.

Peale became known as ‘God’s salesman’ and preaches that wealthiness is next to godliness. ‘Believe in yourself!’ his book The Power of Positive Thinking begins. ‘Have faith in your abilities! … formulate and staple indelibly on your mind a mental picture of yourself as succeeding … hold this picture tenaciously.’

Peale, who died in 1993, is surely looking down with approval on his pupil. How I would love to hear Lehrer on Trump! But I suppose he feels that, once again, satire can’t compete with the reality.