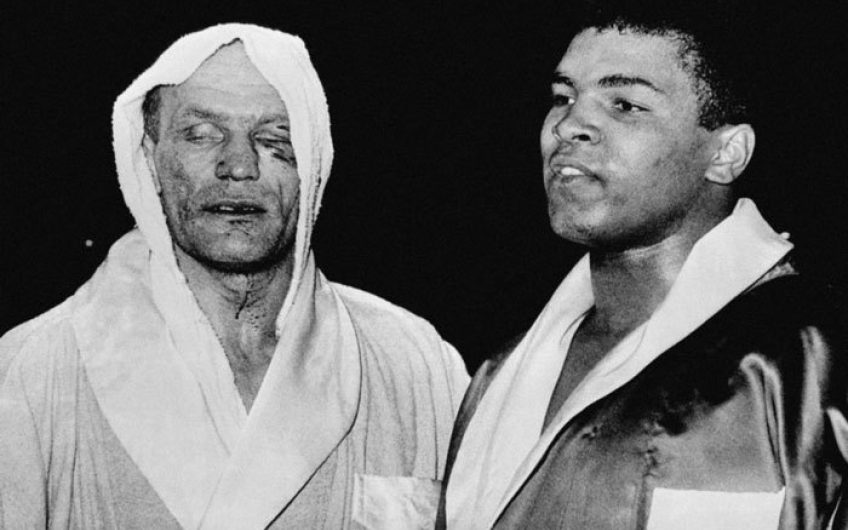 One of the boxing greats, Henry Cooper was born on 3 May 1934 and would have celebrated his 85th birthday this year. Most of us know about his greatest hour.

It’s the 18th of June 1963 and Henry Cooper was about to get into the ring with Muhammad Ali. Ali had been trash talking – calling Our Enery a ‘bum’ amongst other things. Cooper was unruffled, dignified, almost. He pointed out that the more Ali ran him down, the more people want to pay to see the fight.

Copper had grown up in a council house, and he knew what it was to be poor, to take on jobs to help out your mum and to wonder if one day you might, just might, be famous. You never know you might be heavyweight champion of the world.

In the first round, Cooper gets the start of a cut. Ali is mucking around, not taking him seriously. In rounds two and three the cut begins to open on Cooper’s eye. But he remains aggressively taking on Ali and the American begins to seem a bit rattled.

And so it is in the 4th, Cooper that delivers that sweet left hook. It catches Ali square on the jaw. According to boxing journalists it is one of the best punches ever thrown by a British fighter. Ali is virtually out. Two things save him. The bell – that comes at just the wrong time for Cooper. And the robes – they cushion Ali’s fall.

But the dream fades and in the next, Ali who has somehow been revived lands blows that cut Cooper so badly that the fight is over. It’s the height of Cooper’s career. The rematch is badly one-sided and Ali wins easily.

Cooper goes on to tv fame, Brut commercials and becomes a knight and national treasure. He seems to be from a golden age of British boxes. But there is a story that hasn’t often been told.

Right at the height of his fame and boxing career he opened Henry Cooper’s Greengrocer’s shop in Wembley. What’s more he used to work behind the counter, serving local people, always there for a chat and to give an autograph and ring up the purchase on the till.

That shop remained open from 1963-66 and many people here in my parish remember going in and chatting with Henry. It is simply impossible to imagine that a modern-day sport superstar would open a local greengrocers, convenience store or butchers. But how sad really. Our ‘Enery was resolutely of the people and he saw nothing wrong with making money.

Indeed, one of my congregation gave me a great first-hand story. Back in the 1964 he was part of a church just over the road from Cooper’s shop. He popped in and after a chat with henry got the great man to agree to come and open the church fete. On the day, there was no sign of the boxer. After a while, someone from the church went to the shop and there was Henry serving behind the counter. ‘You’re meant to be opening fate ‘Enery, we’re waiting for you.’ To which Henry replied, ‘Business comes first!’ Although he did pop over the fete and do his duty. I( suppose that even if you are biggest superstar in Britain, if you were born poor, then the spectre of returning to poverty never leaves you.

Recently a blue plaque has gone up on the site of the shop. And it was very much brought about by the campaigning of a local man – Tony Royden. Royden found an old photo of himself outside the shop taken in 1966. He’d gone in with his mum and Cooper was serving behind the counter, as ever. After prompting from Tony’s mum, Cooper gave the boy a hug and a smile.

I look forward to the day when we get more sports stars setting up local shops and working behind the counter. But I’m not holding my breath.