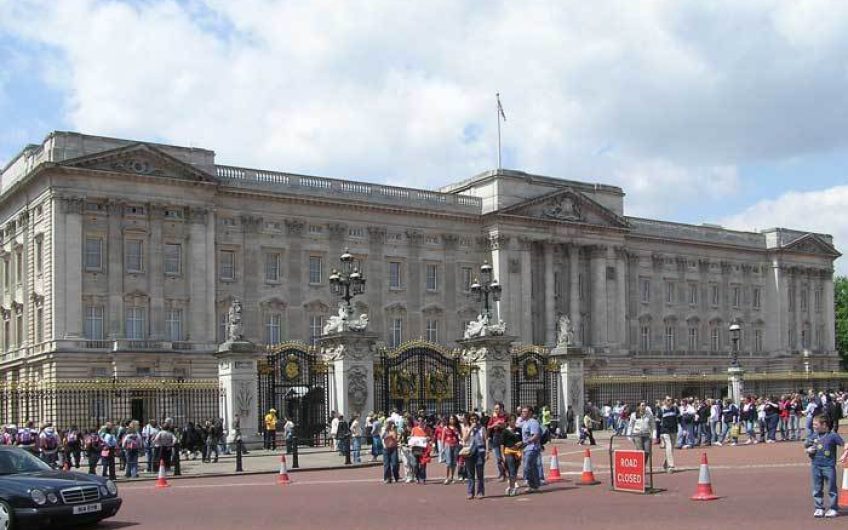 Off to Buckingham Palace for a Royal Garden Party with the children’s author Joyce Dunbar, the writer of the Mouse & Mole books.

We have been invited to represent the East Anglia writers’ group, part of the Society of Authors. Up at sparrowfart, shower, wash hair and don thin summer dress, last worn at my 70th birthday party in 40 degree heat. Today, it is 12 degrees in Norwich. Tights, boots, jumper under dress? Nah. Forecast is coolish for London (14 degrees) but no rain or wind predicted. So, the pretty dress, the sandals and the summer jacket. And silly charity shop hat with added Poundland flowers.

Meet Joyce at Norwich station: she in fetching green outfit with sensible shoes, tights and fascinator instead of hat. Train to London is on time; first class comfortable as always. But sky ominous.

Liverpool Street Station. Cold, grey, rainy, windy London. Thanks to never-ending Crossrail work, we must walk two long blocks in rain to a number 11 bus which will take us to Buckingham Palace Road. Bus turns left onto Waterloo Bridge.

'Don't worry,' I tell Joyce. 'These buses often cross the river then re-cross, to avoid congestion.'

Concerned chap behind us consults driver and tells fellow passengers that we'll have to get off at Westminster Bridge if we want to go anywhere near Westminster, as bus will not re-cross river until Lambeth Bridge.

I ask driver if he's going any closer.

'No,' he says. 'You'll have to get off here and walk. So off we get, and walk more miles to other side of Westminster Bridge – now in slanting rain and howling wind. No sign of a vacant cab or a bus; Joyce is visibly flagging. Roads are blocked everywhere, overseen by two jolly policemen, who tell us this is a taxi drivers’ protest. Parliament Square and Whitehall are closed off.

Best bet is to get a pedalo/rickshaw contraption which charges £10 each to take us to Buckingham Palace, in teeth of rain and gale…

'It’s like being at sea,' says Joyce, as we weave and jolt through the standstill traffic.

Join queue to enter Palace: people in finery, clutching hats and skirts. Show photo ID, walk across gravelled courtyard, through vast, charmless reception rooms in palace – and out into garden among the other 998 invitees. Stop to take gravel out of sandals. Joyce's (replaced) knee goes after such tribulations – so our first stop is first aid tent where J gets knee bandaged by nice, sympathetic St John’s Ambulance people.

Limp to marquee, where we join long queue to get cup of tea (jolly welcome), egg & cress sandwiches, salmon bagels, sundry small cakes. Nowhere to sit except out in rain – so drag soggy chair under shelter for Joyce and we talk to nice Jill from Lewes who is an usher at Glyndebourne, is married to a surgeon – and is absolutely freezing.

People-watch for a while: lots of pretty, floaty, lacy, flowery frocks and inappropriate stilettos, acres of tatts too, and masses of gigantic bottoms. All Human Life is There. I go walkabout when rain eases off and first see Eugenie (or is it Beatrice?), then Beatrice (or is it Eugenie?), both looking v. nice in non-silly hats, sans entourage or baying public, talking to folks.

Then follow sea of mobiles held aloft that makes it almost impossible to see first Prince Harry – take photo of his back – then glimpse of pink hat and it's THE QUEEN! Nice tall man next to me in crowd offers to hold my mobile up to take pics. I end up with a v. nice snap of her smiling in pink hat. Then go back to marquee and have ice cream, while J goes walkabout and sees no one except Duke of Kent with his total lack of chin.

By this time we are both frozen solid. It's raining again. We decide to call it a day – along with 998 other people. How on earth to get back to Liverpool Street? Still no cabs, and now World Cricket Series has started; so traffic is gridlocked again, as we are assured by cheerful gilet-jaune chappie.

Joyce is absolutely done in; so we get another pedalo/rickshaw with totally demented driver who takes no notice of any other traffic, road lanes, direction of traffic, pedestrians or anything else and charges us £15 each to drop us at Trafalgar Square, where bus takes us to Liverpool Street in time to have stiff drink at Merchant of Bishopsgate to get our circulation going again. Also fortify selves for journey with a bottle of red from M&S. Home at 11 pm and collapse.

It was an Interesting Experience. But I don't think either of us would put our hands up to go again. And what an absolute trouper the 93-yr-old monarch is to go through this three times every summer. And what on earth do they do with all the crusts from the thousands of crustless sandwiches on offer?