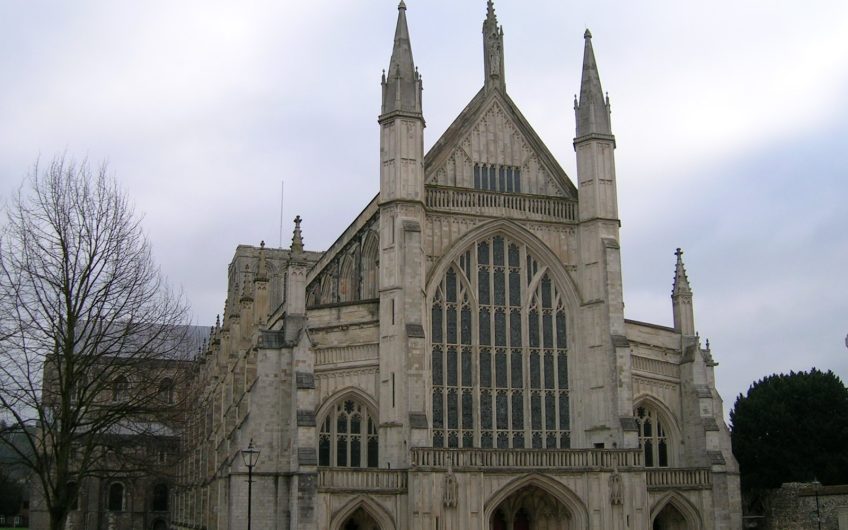 A reputation those hailing from this lush county have enjoyed since the late 18th century onwards. Indeed, as a young hippy poet growing up in particularly “rough” Fareham (during the ‘60s), although attending school in nearby Portsmouth, each cricketing bruise and rugby wrestle seemed to prove this point. Every knock demonstrating, dare I say, that in a manner akin to wild boars who foraged in the undergrowth of now verdant woodlands, we proud farmers and skilled craftsmen are survivors. Yet, even way back, I knew Hampshire was also a place of the mystical and truly Sacred.

A fact I sensed amid my ordeals as a “serial truant” by taking books of Roman poetry to water meadows close to my grandmother’s house in order to educate myself. Overall, a personal task, which should never be abandoned to half-educated teaching “professionals” in any institution whatsoever. Anyway, if recollection serves me properly, these subtle, internal, processes occurred while surrounded by wild flowers, as well as nesting swans. All in all, my voluminous notebooks continually swelling through comments on Napoleonic Fortresses, honeysuckle, haunted orchards, the overwhelming fragrance of roses, golden fields, sparkling ponds and undulating hills; along with the remains of ancient monuments. Each one of these natural miracles making me suspect hidden depths existed beneath our local landscapes.

With hindsight, it was the vibrancy of these colours and earthly odours that taught me Hampshire is genuinely holy. Concurrently, they awoke me to the metaphysics underpinning Titchfield Abbey: a medieval monastic pile (although latterly a country house), located near an almost idyllic 6th century village named similarly.

As such, I still reminisce about visiting there as a boy to make verse sketches among buildings raised by Saint Norbert and his austere Premonstratensian Canons in the 13th century. Its inhabitants searching for Christ Consciousness through their devotion to serious scholarship. Hence, my subsequent attempts to envisage this glorious religious house as merely a secular mansion owned by Thomas Wriothesley in the 16th century proved revealing. They tutored me to understand neither Prince, nor Potentate, can suppress the sanctity of our regional relics for too long. Instead, these consecrated stones existentially evidenced the enduring value of mystery and tradition amid fields where sentient life continually thrives under the Moon’s endlessly silver light.

Nowadays, however, we need to have faith in faith. An insight gifted in the midst of a trip to Winchester Cathedral. Altogether, a magnificent Gothic edifice dedicated to Saint Peter, the Holy Trinity, Saint Paul and, before the Reformation, Saint Swithun.

A realisation, moreover, which increasingly dawned when writing notes about the last resting place of King William II (1056–1100), a manifestly Pagan Sovereign. Of course, William is better known in our day as William Rufus (Rufus being Latin for “the Red”), possibly due to his ruddy complexion, but more likely because he died under questionable circumstances following a hunting “accident”. Circumstantial evidence implying a ritual sacrifice, along with tribal customs intimately associated to ancestral spirits encompassing our empirical world.

At which point, I further awoke to additional comprehensions of Hampshire as an actual seat of perennial wisdom. A locality wherein Christian witness was the latest incarnation of a single philosophy exalting reactive archetypes inside every tree and radiant rainbow surrounding residents and tourists alike.

Obviously, my eyes now open, I came to see bonds between our indigenous Old Religion and British Christianity far and wide. Particularly, perhaps, regarding iconographies relating to Earth, Sun and Star veneration. Undeniably, my journals thereafter thrilled to illustrations of faces formed from leaves, or foliate masks, which still decorate misericords in rural churches.

What is more, blazing Pentagrams representing Eternity (along with each dazzling wound of Christ), equally filled my pages. Assuredly, I detected compromises struck to deliberately include megaliths into the very fabric of churches, even though I decided not to sketch these findings due to their scarcity. Either way, a superb example of neighbourly religious accord can be found at Saint Mary’s, Eversley. Predominantly, a place of prayerful worship where guests discover an ageless sarsen stone in the floor by the font. In other words, anyone examining this rocky artefact will quickly realise a veritable floodgate of godliness has been unlatched.

Certainly, the Long Stone on the Isle of Wight instantly comes to mind in this respect. After all, denizens proudly proclaim it points to King Arwald in the 7th century as their final Pagan ruler. Mournfully, they add Druids once sacrificed white bulls in his honour, since he died trying to defend those wild lands from merciless Anglo-Saxon invaders. Furthermore, Hengistbury Head is immediately recognisable as another place of Pagan repose, because healing meditations have blessed these hallowed grounds across the ages.

Yet, it is our New Forest that remains an unarguable home for devotees of natural theology. Thus, Burley is famous for its white witches. A claim recently championed when Sybil Leek moved to this area and thereafter professed coming from a family of witches dating back to the 16th Century. Atop of which, the Wiccan Gerald Gardner declared he too had been initiated by a Pagan priestess, Dorothy Clutterbuck, who was herself within parallel, hereditary, lines. Habitually, my jotters will carry on recording any supplementary investigations as they arise: especially during autumn when intuitions are strengthened by gentle candlelight and conkers.

Presently speaking, my notepads largely annotate Clapham in South London. Everything considered, a vigorous neighbourhood with a multicultural, urban, grandeur that stimulates its citizenry into engaging with issues of global concern. In so many ways, it is a privilege to now call myself a settled and stable townsman.

Yet, I return to my home acreage whenever feasible, albeit with my Persian partner, or spiritually significant friends. Usually around the gossamer time of our Harvest Festival. Thereupon, we explore Titchfield Abbey together in the morning, followed by lunch at the Fisherma'ns Rest pub opposite.

Nevertheless, to really grasp the staggering holiness of Hampshire generally, I suspect one needs to be a native hog through and through.