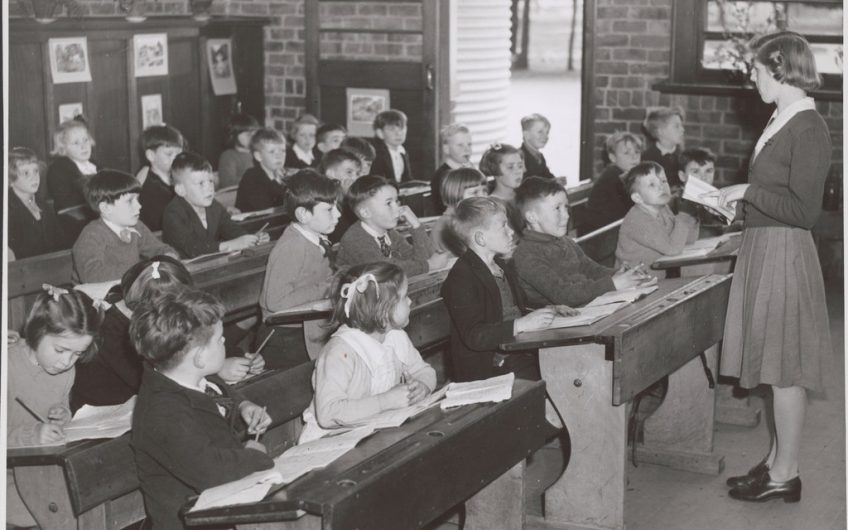 Parents may be frazzled by homeschooling, longing for schools to re-open. But grannies lucky enough to live near grandchildren have enjoyed the chance to invent their own custom-designed lessons.

I was a schoolmarm manquée. My sister and I sat our dolls and teddies in rows and subjected them to spelling tests and times tables, marking their efforts in red Biro. Lockdown has let me play schools again with real live dolls, reliving early schooldays: reciting poems, singing hymns, calligraphy, play-acting, figure-drawing…. with absolutely no resort to computer screens. Luckily, Kitty and Elfie, 12 and 10, are still biddable and when they arrive with shining faces, they ask, ‘Can we have a spelling test?’ Off I go. ‘Accommodation. Apostrophe. Avalanche. Asinine. Ambivalent…’

The teachers people remember most fondly are the inspiring, often eccentric ones, or those parachuted in from outside. Ferdinand Mount wrote in The Oldie about the arrival in his classroom at Eton of John le Carré, to teach German: confronted with trouble-makers, Mr Cornwell would ‘deliver merciless and exact parodies of their arrogant, languid voices’.

I recall the sudden arrival in our English class, when I was 13, of a Canadian exchange teacher from Vancouver. A distinct contrast to our Miss Goudie in her grey bun. He sat on her desk and leaned forward: ‘What is poetry?’ he asked us earnestly. What a question. We mentioned rhymes, flowers, nature, the sea, famous battles… but he trounced us all. ‘Let me tell you what poetry is,’ he said. ‘When you go out at the weekend to camp in the mountains’ (we lived nowhere near any mountains) ‘and climb that path up to the highest point, and then look down to the valley below -- you say “Gee whizz!” Well, poetry is “Gee whizz”.’

How could one ever forget this vivid (if questionable) insight?

There is much to be said for bringing fresh voices into the classroom, with new-fangled (or old-fangled) approaches. My principle with Kitty and Elfie is simple: just show them good stuff.

Today I read out – for dictation - some book openings, starting with Jane Austen’s Emma, followed by Stella Gibbons’s parodic Cold Comfort Farm: comparable in style, phrasing and irony. ‘The education bestowed on Flora Poste by her parents had been too expensive, athletic and prolonged; and when they died within a few weeks of one another during the annual epidemic of the influenza or Spanish Plague which occurred in her twentieth year, she was discovered to possess every art and grace save that of earning her own living.’ The lives of two young ladies, Emma Woodhouse and Flora Poste, summarised in peerless prose. And written out faultlessly by Kitty and Elfie.

We’ve recited Shelley’s Ozymandias, G K Chesterton’s The Donkey, D H Lawrence’s Snake. We read bits of Shakespeare for famous quotations – Marc Antony’s speech, and The Seven Ages of Man. We chant in unison the silly poem by Kit Wright called My Party. Anything they like is copied out in their finest cursive handwriting in a commonplace book.

All grannies can impart skills to grandchildren, apart from domestic sciences like cooking, knitting, needlepoint. Deborah Moggach said she would teach her grandchildren ‘Reportage’. On Zoom, Maureen Lipman does Drama with hers.

Most of all, with mine, we aim for laughter. I slip in patches of Richmal Crompton, P G Wodehouse and Mr Pooter: that’s my idea of set books, establishing a lingua franca between three generations. When they responded keenly to The Lake Isle of Innisfree, I also gave them a very good pandemic-centred parody beginning, ‘I won’t arise and go now, and go to Innisfree:/ I’ll sanitise my doorknob, and make a cup of tea.’