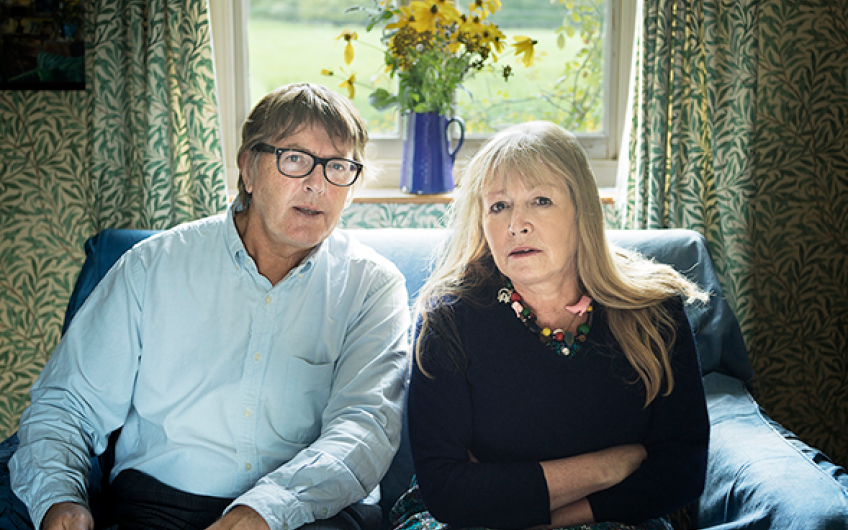 A new series of Gogglebox starts tonight on Channel 4. Here's what happens to the earnings from the show.

In a fresh post-Christmas blow to the retail sector, my wife, Mary, has seen fit to withhold monies owed to me from my television reviewing career on Gogglebox. There is a danger in her releasing the aforementioned funds, she claims, as it might lead to ‘more moments of madness’.

It is only recently that I have had a so-called disposable income. Previously, there had been no history of my making any purchases outside of subsistence shopping for staples. Correction. I once bought a Maglite torch and a £1 spring-loaded coin dispenser, converted from a First World War cartridge shell, from which I used to dispense coins to pay my Jungian psychoanalyst.

Now Mary proclaims herself shocked by the goods I have recently bought with this pin money. She says they show evidence ‘of mental deterioration’. To add to my existing condition of Variable Intelligence Disorder, she carps, I’m now exhibiting Variable Taste Disorder.

This brace of uncommon disorders can of course lead to marital distress. Mary has declared that she will not yet go so far as to ask for power of attorney but will keep the monies in trust until such time as I come to my senses.

The first warning bell rang with my purchase of a cushion from a charity shop in Brandon, near Thetford. Made of fire-retardant materials in a faux-tapestry finish, it bore the legend Lord of the Manor. I placed it on the Parker Knoll in our television room and, standing back to admire it, beamed proudly at Mary as I channelled Benny from the Crossroads Motel.

‘Where did that come from?’

‘But you never buy anything!’

‘No, not before today, but it’s beautiful, isn’t it? What’s more, the price was right, Mary. It was secondhand, reduced from £10 to £5.’ The cushion was the thin end of the wedge. She now claims that every purchase I have made since that initial splash-out moment is hideous and unsuitable.

The most offensive, she judges, is a large, beige, plastic mopping bucket which ‘disfigures the whole downstairs of the cottage’. The second most offensive was an acrylic picnic blanket in vivid pink tartan, impregnated with sufficient chemicals to allow it to double as an insect repellent. It has yet to fulfil its promise.

Oddly enough, my late father started buying things in bad taste at precisely the same age as I am. He famously purchased a concrete cormorant from a monumental mason’s at Congleton, Cheshire. He perched it on a self-built ledge in his ornamental pond. Following his death, none of us had the heart to dispose of it; so it now lurks out of sight under a shade-loving shrub in my mother’s garden, its concrete beak poking out malevolently.

Despite his unsuitability as a role model, I was inordinately fond of my father, even during the difficult Noilly Prat years. The result is that I find myself imitating his faults, as well as his virtues.

And so I have not admitted to Mary that I myself have recently bought a concrete otter. I have placed it on the edge of our own wildlife pond, which Mary has not deigned to revisit since I installed it. Mary says the pond is too small. I could have had a bigger one, but I was given the lining by a friend who was throwing it out from his tiny London garden. This one is no bigger than a dustbin lid and now almost entirely dominated by an otter.

At this age, my father invested in a collection of ornamental owls, die-cast from some base metal. They had no artistic merit. Many still had ridge-like marks where they had been carelessly snapped from their moulds by low-skilled workers.

Godfrey, my father, brought one as a house present when he went to stay with some sophisticated Swiss Germans, Gaye and Gisbert, who owned several Giacomettis. We urged that it would be better for him to come with no present than to come with a die-cast owl but, like me, he was an obstinate man.

I am a fan of the efficient, German-run Lidl supermarket from which, last week, I returned with a nest of collapsible, black-metal-and-steel trestle tables (suitable for the catering trade). I have started to have TV suppers off one of these tables, as I like to keep up standards by not slouching. And yet the expression on Mary’s face as I erect this table is one of pure hatred.

Godfrey also started a collection of boating hats and sinister flat caps. I found myself at the National Trust shop at Mount Stewart in Northern Ireland, rummaging through a tasteful basket of hats in traditional, understated tweed as befits a country gentleman, until I found the only garish one – a most unsuitable, turquoise, checked flat cap which would not look amiss on Noddy Holder’s head.

When we were invited recently for luncheon with the Lord Lieutenant of Wiltshire, Mary begged me to take the hat off before sitting down. But our host graciously urged me to keep it on as a novelty throughout lunch; which I did, also clutching a can of Guinness. Her husband was much more laconic. He said that wearing a hat indoors at lunch was a sign of illness and my drinking stout instead of wine only confirmed this.

Illness perhaps – but hardly surprising if so. My father became ill at this age…

This article is from the February issue of The Oldie magazine