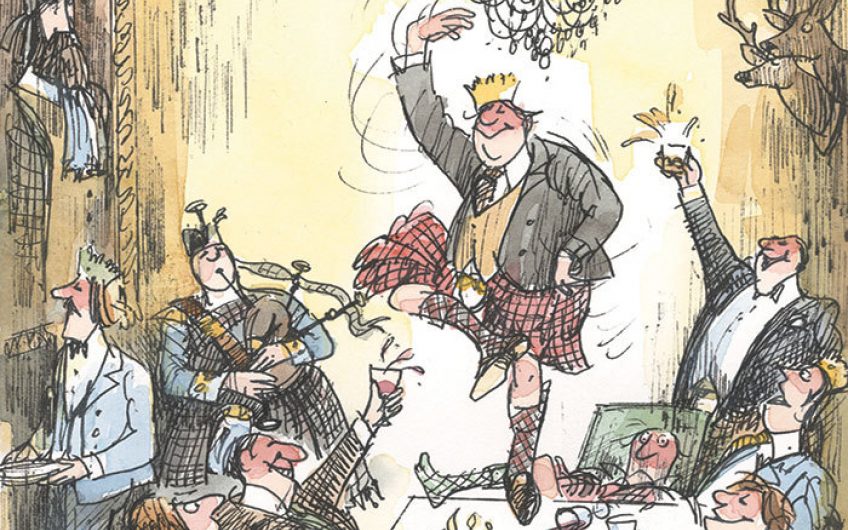 ‘Na,’ my friend Pat said. ‘I dinna hang up a stocking the nicht. I dae that on Hogmanay, an’ I get my presents on Ne’er Day.’

We would have been six or seven then, 1944 or 1945. Pat was the grandson of the grieve on my mother’s farm. This may have been one of my first moments of awareness of social differences; for of course, like other middle-class Scottish children, I expected Santa Claus to come down the chimney on Christmas Eve, and next day we would have Christmas dinner with a roast fowl – no turkey then – and a plum pudding with threepenny bits wrapped in cloth hidden in it.

Pat’s position was more usual, however. Christmas Day wasn’t a public holiday in Scotland then. Shops were open as usual. So, I think, were most offices. People went to work in factories and shipyards. Banks, as I recall, observed Saturday hours; open till midday. Scotland wasn’t like England; we did things differently.

It goes back to the Reformation. In England Henry VIII broke with Rome, made himself the English Pope (Supreme Head of the Church in England) and remained, in his own eyes anyway, a good Catholic boy, persecuting Lutherans and Roman loyalists alike. His daughter Elizabeth’s religious settlement took the form of a comfortable compromise between old and new. This was very English, a fudge here and there, so that almost everyone could adhere to the new national Church of England.

Things were done differently in Scotland. Our Reformation came to us from Geneva, and we drank the pure water of Calvinism. Anything that smacked of Papist idolatry was banned. Anything for which there was no scriptural authority was out of order. No celebration of Christmas, after the Nativity itself, is recorded in the Bible. Therefore there should be none in Scotland. Accordingly it was forbidden, along with the other feasts of the Roman Church.

Apart from anything, Christmas encouraged jollity, and jollity was suspect, feasting an invitation to sin. In any case the Presbyterian Kirk then, and for a long time after, paid little heed to ‘gentle Jesus, meek and mild’. Admittedly a Presbyterian divine called Andrew Melville sternly informed James VI that there were two kingdoms, and in the Kingdom of Christ James was ‘nocht but God’s sillie vassal’; nevertheless the Kirk much preferred the fierce and demanding Jehovah of the Old Testament. He was the Lord with whom the God-fearing Scottish People had made a Covenant. As for the Virgin Mary, what was she but a heathen goddess dressed up in Roman garb? So she was dropped, along with all the other saints to whom benighted Papists addressed their prayers.

By the mid-17th century zealous Calvinists were as hostile to images of the Virgin and the saints as any Iconoclast in 8th-century Byzantium had been, or indeed as any devout Muslim – let alone any Islamist – today. Even Easter, which is at the heart of the Faith or the Christian message, took a back seat in Scotland. This wasn’t entirely illogical. Calvinism with its doctrine of Predestination might even seem to make Easter superfluous. God had already divided men at birth into the Elect and the Damned. So what was there for Christ the Redeemer to redeem?

Gradually over the centuries the Kirk, influenced by the spirit and ideas of the Enlightenment, became more liberal. Fundamentalists might break away to form the various Free Churches, but the Established Church of Scotland softened its line. Christmas, it realised, might not be such a bad idea after all. No doubt the development of the Dickensian English Christmas had something to do with this. More to the point, perhaps, liberal-minded ministers came to realise that the Nativity, with the child in the manger, and the shepherds and Wise Men who came to worship him, was one of the most attractive elements of the Christian religion, appealing even to people who had no interest in theology and who, if they attended church at all, might do so principally, or at least in part, because this was a mark of social respectability.

So, even when I was a child, it was already usual for a Christmas tree to be erected in the kirkyard, and many ministers were already imitating the clergy of the Church of England, the Episcopal Church of Scotland and even the Church of Rome by holding services on Christmas Eve. Nevertheless, even in mid-20th-century Scotland there were a great many people who never entered a church, except for funerals or perhaps weddings, and it remained the case that the great winter festival was Hogmanay and the New Year, not Christmas. So there were many children whose fathers went to work on Christmas Day, and who, like Pat, had to wait till the New Year for their presents.

Enemies of Christmas were fighting a losing battle, however. It wasn’t religion that beat them. It was commerce. Already, when I was still a child, department stores throughout the land had cottoned on to the fact that Christmas was good for sales and business. A Santa Claus was installed in every large store, and only the most flinty-hearted of parents would deny their offspring a visit to Santa’s grotto where they would receive some trumpery present.

Then there was entertainment. The highlight of our Christmas holidays was a visit to the pantomime in His Majesty’s Theatre in Aberdeen. There was no place for Calvinist anti-Christmas dogma there as we delighted in – or were puzzled by – cross-dressing with an improbably long-legged girl in tights playing the principal boy and a Scots comic like the great Harry Gordon or Dave Willis as the Dame. The message was clear. Christmas was a time for fun and delight, and though one may have perceived this only dimly, for the upsetting of the natural order.

And then came television. In the days – indeed the weeks – running up to Christmas neither the BBC nor ITV paid any heed to the old Anglo-Scottish border or to historic cultural differences. Television and commercialism made Christmas the Great British Festival; only x number of shopping days to Christmas. Scots obediently, indeed enthusiastically, fell into line. Christmas became in Scotland what it had long been in England: the great winter festival. Gradually even Hogmanay and the New Year took second place. I doubt if there are children now who have to wait till then for their presents, as Pat used to.

It’s part of a pattern. Over the past 100 years the social, religious and cultural differences between Scotland and England first blurred, and then gradually disappeared. In the 1880s Robert Louis Stevenson had outlined them in an essay entitled ‘The Foreigner at Home’. The difference was distinct when Stevenson wrote that essay; it was still fairly distinct when Pat had to wait till Hogmanay to hang up his stocking.

Not so now. Almost all social surveys indicate that Scots and English think alike about most things.

Paradoxical as it may seem, this blurring and erosion of differences account for the rise of Scottish Nationalism as a political force. For people who want to assert our difference from England, there is now only politics left. So England votes in a Tory government, Scotland an SNP one. It’s a way of insisting – or pretending? –that we are still very different. But Christmas gives the lie to this. Christmas is British and is now celebrated as enthusiastically on either side of the old – and in so many respects superfluous – border.