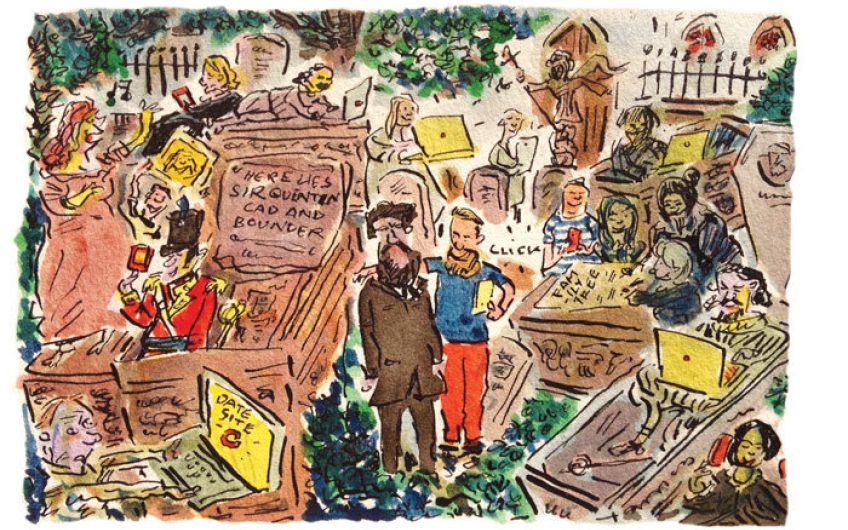 My new brilliant idea is online dating for dead people. This will provide a service to the growing army of ancestor bores researching their family history, poking around in graveyards, pestering vicars and fidgeting in archives. The craze is still with us – and so is that TV programme Who Do You Think You Are?, in which fairly famous people emote about great-great-great grandmothers they never knew they had.

Telling others about your ancestors is like sharing last night’s dream: it should only be inflicted on people very close to you. The great dread must surely be that, after months of research, you discover that all your forebears seem to be rather boring and, worse than that, respectable. Five generations and just one measly child born out of wedlock! What a bitter letdown when it turns out that you come from a long line of amateur genealogists. The unfortunate truth is that one person’s family history may be exactly like thousands of other family histories – just as those Victorian family photographs all look alike, with the bearded, black-suited father, his pained, stiff-backed pudding wife and cluster of dead-eyed children next to a half-dead aspidistra. (And all those aspidistras look the same as well.) The charm of online dating for the dead is that it will help people to shape their family tree. With just a little bit of discreet retrospective topiary – say the addition of a dashing great uncle or a great grandma who was a flighty minx – you can embellish your dynasty of dullards.

Searching for long-dead family members is, after all, for the benefit of the living. It is a form of narcissism. Someone straight out of a dusty basement of parish records will tell you he feels a real bond with the ancestor who at the age of 14 was trampled to death by a horse in 1788. Or a woman at a party will announce that she is descended (distantly) from a Frenchwoman who was briefly a very minor opera singer before she died of TB in a Manchester slum. ‘I feel that’s where I get my passionate and artistic nature,’ she says. At this moment it may be wise to change the subject by asking her what star sign she is.

With dating for the dead, we can all get together on the internet and swap ancestors. Somebody out there will be able to supply your family with a black sheep. I may perhaps have a great-great-great-great grandfather who fought alongside Wellington at the Battle of Waterloo. (And when I say ‘alongside’ I don’t actually mean shoulder-to-shoulder, but somewhere on the same battlefield.) I may be prepared to let this soldier ‘marry’ your female ancestor of the same generation, the daughter of a worthy haberdasher, who was actually hitched to a man called William, described as a ‘labourer’. In exchange you could allow one of my great aunts to elope with the Spanish nobleman you have hanging about on the fringe of your family tree.

Having made contact through the dating site, the family researchers would arrange to meet, perhaps in a restaurant. At first the encounter might be quite awkward, but after exchanging a few well-creased documents covered in faded copperplate writing and some -photocopied censuses, things may soon become animated. Treasured sepia photographs may well change hands, death certificates would be shared and sighed over.

Slave-owners with plantations would be swapped for Victorian murderers; girls born in the workhouse could be married off to missionaries and have 17 children; spectacular bankruptcies could be redistributed; dull cousins could be shipped off to the colonies and to lives of adventure. People could choose how their families went up or down in the world. Mrs Bun the baker’s wife can change places with Lady Gateau, leaving both families happy. Who would know?

The beauty of this scheme is that it combines two of the most popular and profitable activities on the internet, namely dating and ancestor research. It will mean those who are exploring their family history can be encouraged to talk to each other and not to the rest of us. And if a romance happens to ­develop between two people shuffling their ancestors between them, then that can only be a bonus.