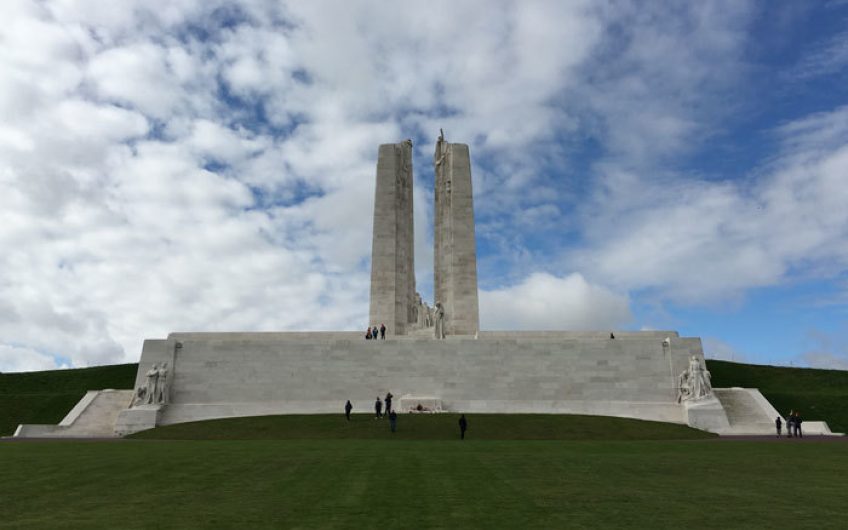 One hundred years ago on 11th November, Soldiers and veterans filed past the Cenotaph for the first Remembrance Sunday ceremony. But this cenotaph was not the stone structure we know today. Built in June of that year, it was made of wood and wasn’t intended to be permanent.

Lloyd George was the first to suggest it. Inspired by plans for a saluting point at the Paris Victory Parade on 14th July 1919, he asked Lutyens to design a catafalque-like structure that would serve the same purpose at the British parade in London. It didn’t take long to put together. (It has been suggested that Lutyens may have already been working on a similar design).

Four days after the parade William Ormsby-Gore, MP for Stafford, asked Sir Alfred Mond, about the possibility of a permanent monument. Soon, the public and press too took up the call. And on 11th November 1920, the Portland stone monument we know today was unveiled.

Other memorials sought to create specifically national legends. Take the expressly Teutonic style of the Tannenberg Memorial in Germany, or the memorials which show a fighting Tommy surrounded by his British military forbears (the Agincourt Bowman, Wellington’s redcoats and the like). The Cenotaph’s classical design and lack of religious imagery – as expressly commanded by the then prime minister, Lloyd George – gives a very different image. Drawing on a common past, it gives the monument a more universal appeal.

The extraordinarily striking memorial at Vimy Ridge in Arras, France, is intriguing in that it appeals to both universal and national.

The memorial, which is on the site of the battle of the same name, commemorates Canada’s war dead. A fitting place, as the battle was the first in which all four divisions making up the Canadian Expeditionary Force (CEF) fought together.

The monument consists of two pylons on a broad stone base, both made of Croatian limestone, which took the architect, Walter Seymour Allward, two years of painstaking searching to find. The stone itself is the same as that used to build the Roman Emperor Diocletian’s palace in Spilt, Croatia.

Inscribed on the base are the names of some 11,285 Canadian dead whose bodies were not recovered from the battlefields of the war.

The meaning of the memorial could not be clearer. Like the cenotaph it lacks any denominational imagery. The eight figures atop the pylons represent peace, charity, honour, hope, faith, justice, truth and knowledge. All these are abstract principles in which people of all denominations could believe.

Unlike other monuments, it shows the defeat of militarism. At the base of the monument, on the southern point, a group of three figures, named the Breaking of the Sword, practically enact the 46th psalm (they ‘breaketh the bow and cutteth the spear in sunder’). Interesting to note that it is man and not god which does this.

Originally the figures at the foot of the base were to have been shown crushing a helmet under foot. But the design, meant to show the defeat of militarism, was considered too… militaristic.

At the front of the memorial at the centre of the base is the figure of Canada Bereft (also known as Mother Canada), mourning over a tomb below her, at the foot of the memorial. A man and woman, flanking the steps up to the back of the monument, are the parents of the dead.

I went to the memorial for the first time two years ago and again in September. The power of the memorial if anything intensified on the second visit.

When you turn off the main road onto a quiet country lane, the trees flanking the road are very evenly planted compared to the morass of woodland behind it giving it the impression of two lines of policemen holding back a crowd.

The car park is a five-minute walk from the memorial itself. The barbed wire and wire fencing along the side of the path to the memorial are a stark reminder of the tonnes of unexploded ordnance underfoot.

The effect of the exploded shells is all too visible. The woodland floor is a mogul field with the occasional breathtakingly deep crater, the power of which is astonishing to behold even after a century of – admittedly interrupted – peace.

As you proceed towards the memorial, the trees thin out and suddenly you see it. The two pylons rising up into the skies. With no trees for at least a hundred yards on either side and at the highest point of the ridge, it is very striking.

At the monument itself, there is a dissonance between the grieving Mother Canada and the hopeful figures atop the pylons. When it was opened, it drew criticism for that very reason. It couldn’t make its mind up.

I disagree. The hope and values of the nation are represented atop the pylon and at the foot of the base. And the suffering of all Canada is met in the figure of Canada Bereft. They are very different images - but not in conflict.

The memorial represents the moment the Canadian nation was born.